This week is "Silver Week," or "Autumn Golden Week," a series of holidays with a name that refers to the more established "(Spring) Golden Week" in late April and early May. Like Memorial Day and Labor Day they signal the change of seasons, and it is common for Japanese people to travel to natural areas to take in scenery, hiking along with their bear bells and trekking poles, or taking the kids out to the local car campsite to hold a barbecue.

I decided to attempt a longer trip than usual, as this will probably be the last chance I get this year for more than a few days off (I had 6 days), so I went for the Southern Alps. Of three groups of mountains in Japan known as "Alps," the Southern Alps are the least developed and have the least visitors, though by no means was it empty!

The Southern Alps also contain the tallest mountain in Japan after Fuji, known as Kita-dake (North Peak). Kita-dake was my objective, though I planned to take in a large number of peaks in the range.

The first mountain, though, that I wanted to visit was Ho'o Sanzan, the Three "Phoenix" Peaks, Yakushi-ga-take, Kannon-ga-take, and Jizo-ga-take. I had seen pictures of Jizo-ga-take and was really impressed by the unique rock formations; when I found out how close it was to Kita-dake I knew I had to go that way.

A trip to the north part of the Southern Alps usually means a stop in the city of Kofu, known for its lack of wind (I suppose because of its location, surrounded on all sides by tall mountains?), then an hour-long bus ride into the mountains. I got off at the Yashajin trail-head for the approach to the first of the Ho'o Sanzan, Yakushi-dake.

Yakushi, Kannon, and Jizo are Japanese names for important bodhisattva: Yakushi is the Buddhist "doctor," Jizo is, in Japan, most often the protector of children, and Kannon is a hermaphroditic savior--as Kuan Yin in China, she is almost always female, where in India and Southeast Asia he is usually male; in Japan he/she is portrayed both ways, perhaps due to successive importation from the two regions. These bodhisattva are very popular in Japan and everywhere that Mahayana Buddhism is followed, and, with Amida-bosatsu, their names are used for mountains throughout Japan. I once climbed Amida-dake in the nearby Yatsu-ga-take range, something I wrote about in an earlier post.

My legs ached a bit more than usual, and I was a bit tired. I was actually starting late: I had planned to start my trip on Saturday, but for some reason I couldn't sleep until 3 in the morning, and with my train leaving at 5:50, I decided it would be best to start the next day instead. I slept well enough Saturday night, but I'd had several restless nights that week and, as most will know, it takes more than one night to recover from an inadequate sleeping schedule.

Four buses left for Yasha and their final destination, Hirogawara; myself, another person from overseas, and a tiny but sinewy old man were stuffed among the bags of passengers with proper seats. I managed to sit down for the hour-long ride among stuffed packs, and fell asleep several times before being awakened by a rough bump, then falling asleep again.

But at last we were off; I paid the bus fare and headed into the mountains. I'll be honest, I don't remember much about that first ascent towards Yakushi; I think it was overshadowed by my memories of the fantastic views and sense of awe I felt later in the Ho'o range. I may also have been a bit asleep at the time...

It was a clear day, one of the clearest I have experienced in the Japanese mountains. The mountains I was climbing were fairly high, too, and as I reached their peaks the vegetation fell off, until, at the peaks, there was little more than scrub and very tiny trees. So there were many inspiring views along the way, of Shiramine Sanzan (Kita-dake's group) to the west, Kaikoma-ga-take to the north, and Yatsu-ga-take, the mountains of Okuchichibu, and Fuji to the east. It was intoxicating to be in such fabulous company, and I felt a joy and sense of ease the entire time I was winding through Ho'o Sanzan that I just do not normally experience.

My photos do not do it justice. 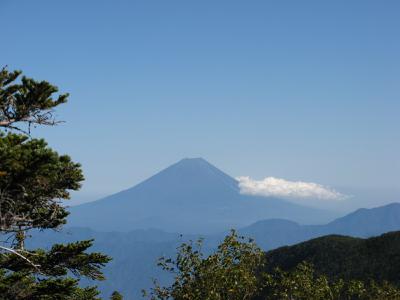 This set of mountains is not covered in the English "bible" of Japanese mountains, the Lonely Planet Hiking in Japan, but the three mountains can be covered in one or two days, and I really consider them the highlight of my hiking so far in Japan. Kita dake certainly has its high points (pun intended), but the rock formations of Yakushi, Kannon, and especially Jizo really make the hike unique, and their position between Kita-dake and Fuji make them a great place to view the two.

Yakushi was first. I didn't expect much: being the third tallest of the three, Yakushi might not get as much publicity. But really, it has some attractive formations, and I spent a good amount of time taking pictures. It also affords good views of the other two peaks in the range. 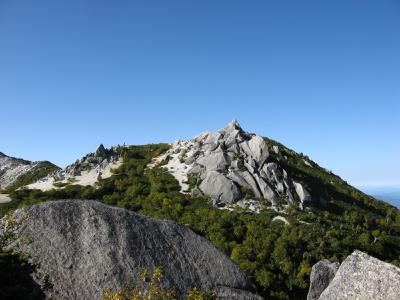 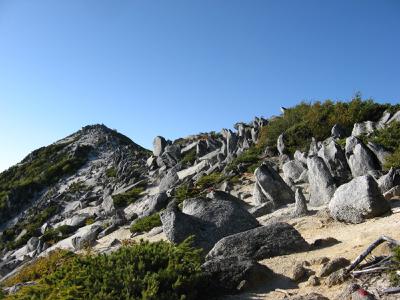 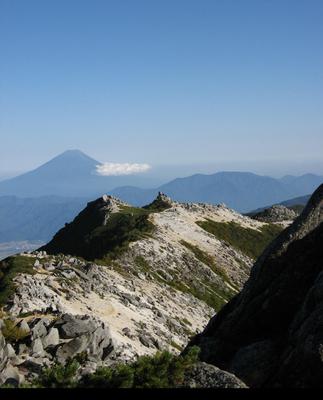 Kannon, the tallest of the three, is crowned with hundreds of spikes of granite, and it made me think of her common representation with hundreds, meant to be thousands, of hands. That may be the reason the mountain was so named. 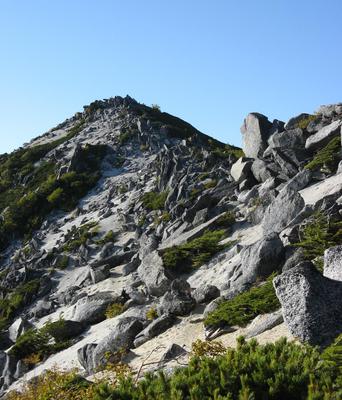 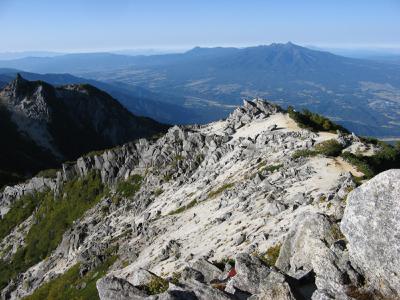 The descent towards Jizo was difficult because the road seemed to be made from some form of silicate, and I often slipped. But when I could, I stopped and snapped pictures of Jizo-dake, by far my favorite of the three mountains. I didn't in fact climb Jizo that day, as it was getting late; my destination was about an hour down, at a mountain hut with associated campsite. 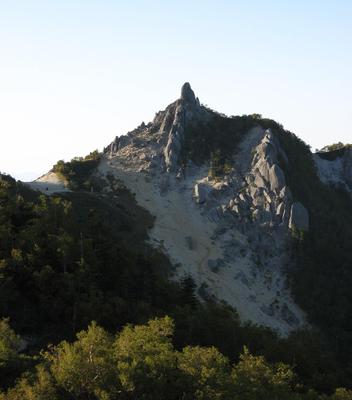 Hiking is a bit odd in Japan. You climb for hours, and very often you will run into fellow hikers, especially in well-known places like the Alps. Without fail, just as in the US, people will say something, at least nod, and there is a protocol for passing and being passed. But once you reach the mountain hut/campsite, you are once again in civilization, and groups of hikers do their best to ignore other hikers. 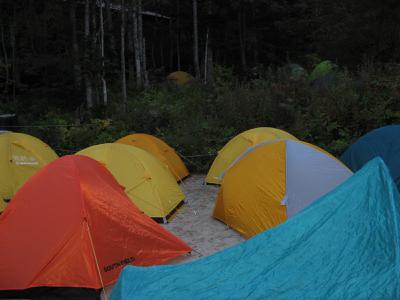 Except in Oze and the most famous parts of the Alps (the Central Alps' Kamikochi being reportedly the worst), when you are actually hiking you usually get at least a few moments alone. But when it is time to camp, or you get to a peak, you are almost certain to be surrounded by gobs of people, eating lunch, drinking sake, sometimes even listening to the baseball game on the radio or talking on their cell phones (what is "#~!ing wrong with people!). So, just like back at home, you have to shut out the other people except in the most dire situations, and try to forget you are sleeping 3 feet away from someone snoring and farting next to you (it happened!).

This really only bothers me when I'm trying to sleep, and luckily even the chatty Osaka boys a few feet away were in bed by 8 that night, so I was able to sleep well enough. It is an experience, though. Still, it is far better than being turned away for lack of space.

After a ramen and freeze-dried tofu dinner and looking at my map and dreaming of hiking the entire area around Kita-dake, followed by a few pages of The Lord of the Rings in Japanese (another story), I went to bed.