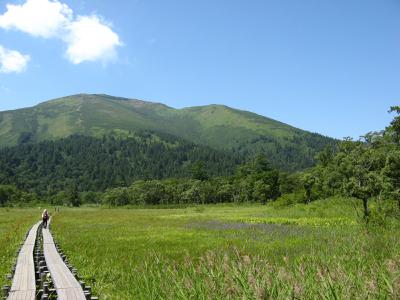 My second day started early--I went to sleep at around 7 and woke up at 4 am, setting and rising with the sun, I guess.

I looked forward to a grueling day--13 hours by the map. I've gotten to the point where I usually beat the map on ascents (for example, I made it up Mt. Nantai in Nikko in three hours when the map says five!) but descents I take slower for some reason. And on a day longer than 10 hours I generally tire at the end and slow down, taking a lot of rests. So while I hoped to gain some time during the climbs, I expected it to take at least a full 12 hours for me to get to Oze.

Seeing the peaks and ridges of the surrounding mountains from the ascent up Mt. Nenakusa against a bank of clouds broken by the rising sun was one of the greatest pleasures of the trip. Looking at the old mountains, older than I can truly comprehend, I wonder at the tiny, inconsequential fears and gains that punctuate each day. The mountains don't care and, just for a moment looking at those silent ridges, neither do I.

After passing the peak of Mt. Nenakusa, the trail descends into a valley, the Kinu River valley. A road comes from the east to the Kinu Marsh Onsen (Kinu Marsh Hot Springs), a large structure also called a "mountain hut", though "resort" would be more appropriate. I'd hoped for a vending machine in my decadent hiker dreams, but no luck.

At this point my time was looking pretty durn good. I'd managed to make in an hour (if I remember correctly) what was estimated on the map to take two hours. Maybe I could make this whole thing in half the time, 7-8 hours! I knew there was no chance, but I was still hoping to get in before dark.

I forgot to mention that I ran into a couple of hikers on the way down from Nenakusa I had run into a couple of hikers, one of whom told me there had been a bear sighted the day before. He had the exasperating habit of some older Japanese people to speed up their talking when they realize you don't understand what they are saying. He, like my friend's grandmother in Hiroshima and my landlord, spoke indistinctly and in an old-person's dialect, which is hard enough to understand in itself. But unlike the younger people (I'm talking under 70), who like to slow down and, if necessary, more clearly enunciate certain words, they all seem to speed up and, by necessity, become even less clear. I can usually catch the gist, at least, when younger people speak, but all I could catch from his jumble was "bear", "three cubs", and "Konze" (the mountain from the day before). I tried to sound frightened, but he clearly understood I didn't clearly understand. He walked on, talking to himself, apparently, because he wasn't talking to me anymore. 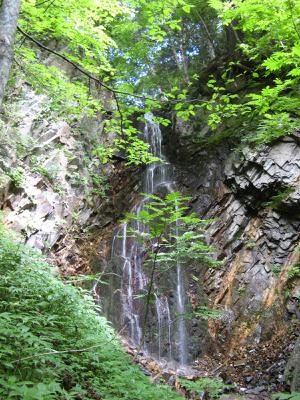 After passing the hot springs I was back on ascent, headed this time up to Kinu Marsh. There was a surprisingly pretty waterfall I visited quickly, filling up my water bottle. It took a good while to make up to the Kinu Marshland, maybe an hour. This area is a good prelude to Oze itself, with a nice, compact version easily accessible. Oze takes a bit more finagling to get to, though it is probably 50 times bigger.

At this point, my time gains were getting smaller (I was about 5 hours into it, I think). The area around the mountain hut I stayed in stays snowbound into June (there was a second door, higher than the main one, set into the building for just such occasions), and I think it is likely the maps times were adjusted for that. After a two hour gain at the beginning, I mostly got 15 minutes here and 20 there: faster, but in the end I still was trekking for over eleven hours.

I'll shorten the story a bit, noting two things before I get to Oze. First, I recommend climbing Mt. Kinunuma, though it's off the main trail: the map says a total of 40 minutes, but after taking off my backpack and leaving it at the junction, I made the trip in no more than 15 minutes (felt like I could fly without that 65 liter bag on my shoulders!). Note that the junction is not marked with a sign but with rings of tape around trees, the same tape used to mark the trail, so it can be a bit confusing. Still, if you are looking for it, it's hard to miss--there are about 20 rings around several trees.

Second, getting to the "mizuba" or spot to refill bottles with fresh water (a common and welcome addition to Japanese trails) near Akayasu Mountain is difficult and a bit dangerous. It is down a steep climb that is not clearly marked (I found a rope to help on the way back up).

Other than that the hike to Oze is a meditative, slowly downward descent over a soft ridge. From the mountain hut it took me a little over eleven hours, and though I was exhausted by the time I got there, I was happy I did it.

The eastern most campsite, where I stayed, is unique in that the sites are on wooden platforms. The campsite is actually the first man-made structure on the trail once you reach Oze, so I walked through, wondering how I would pitch my non-freestanding tent there. It took a while to get to the reception desk, in a large building called the Oze Huette (from German for "hut") and asked for the site furthest from the other campers (yay!). There were only a few campers, so I was off by myself though, had there been more campers I might have been surrounded by others. For reference, sites 8 and 20 are separate from other sites: you'll be able to hear other campers, maybe, but won't be able to see them!

The man at the desk told me I could pound stakes into the wood; I was too tired to tell him he was crazy. In fact, I was able to wedge my triangular stakes into the gaps between the planks, and it worked out just fine. I was tired so I decided to make ramen with some tofu hamburger, which didn't work out so well, but I didn't really mind; my body just wanted something to help repair the damage I'd done to muscles and knees during the day. 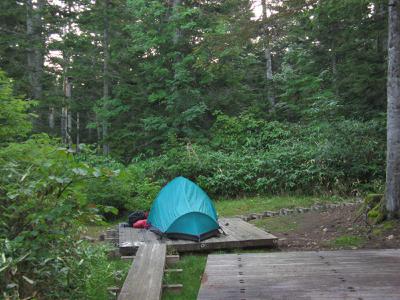 It was a clear night, and when I woke up in the night to go to the bathroom (very far from the campsite that I chose!) I came back and sat with my head sticking out of my tent for about a half an hour, just looking up.

I woke the next day ready for another trek. It amazes me how my body can repair most of the punishment I mete out in just 8 hours, very often adding a bit of muscle to help make it easier next time. I'll admit, though, that I was still worn out, and I decided not to climb a mountain that overlooks the Oze wetlands: my objective for the day was to make it to the bus stop and head home. Though that meant a good 5 hour walk, it was mostly flat. 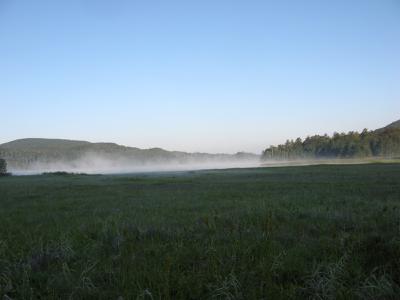 I woke before the dawn, but that was hidden by the mountains anyway; I did take in the view of the misty marshlands before the sun rose, though. It was relaxing and peaceful, a respite after two days of constant travel. I filled up water bottles and was ready to go about 6 am.

Almost all of Oze is protected from the millions of visitors that come each year by the same planks I slept on. This setup also makes it possible for wheelchairs to enter the park, one of the few natural areas that is so accessible. That's not to say, though, that the trail isn't strenuous in areas, and in my condition I was huffing and puffing fairly quickly.

Oze is big, big, big. Not as big as Yellowstone, but big for Japan. The time I was there the expanse was almost entirely green, with few of the flowers Oze and all meadows are famous for. There were two flowers blooming at the time: a yellow and a purple (sorry, not very knowledgeable about flowers), and the water lilies in the many pools decorating the area were just beginning to send up their flowers, though none had yet bloomed. 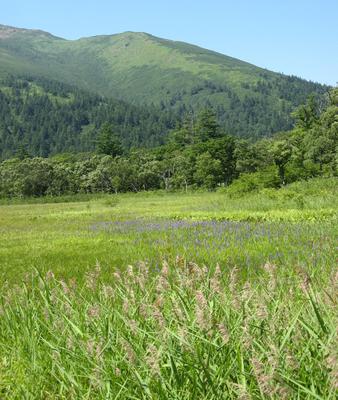 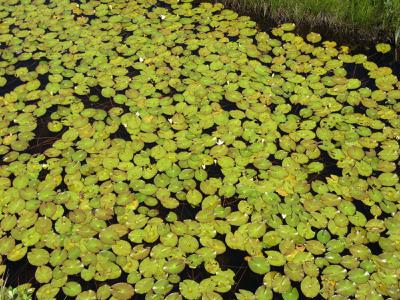 It's very easy to get around Oze, so it attracts many people. It was a Monday morning, and yet by the time I was getting close to the bus stop, huge crowds of families and seniors hiking groups were already streaming along the path in the opposite direction. I was saying "Konnichi wa" with every breath at one point. I was glad I had stayed in the park and had seen the park before it welcomed amusement-park level crowds; I hope I am never there on a weekend with flowers in bloom. 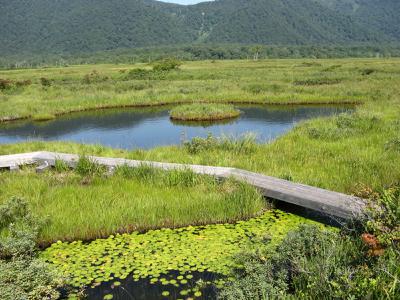 In the end, Oze was pleasant, but I think I enjoyed most the area around the mountain hut and at the top of Mt. Nenakusa. I will be visiting there again soon. In fact, writing this post has really made me want to head out camping again; maybe next weekend!