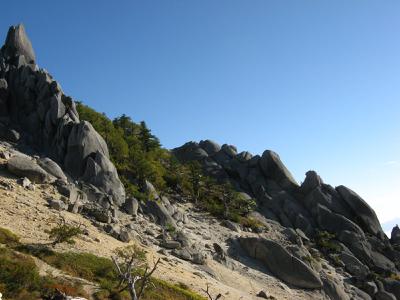 My second day in the Southern Alps started with a climb back to Jizo-ga-take. This time I meant to actually get to its peak, or, really, as close as I could get to the peak. You can't reach the very top without a rope, but I got a bit of climbing practice in anyway, edging up the rocks that surround the main spires of the peak. This was again very pleasant, and I spent well over a half an hour sitting and taking pictures from Jizo's high vantage.

I climbed down. Today my objective was my objective for the entire trip--Kita-dake, a non-volcanic mountain that stands second tallest after Fuji, though a distant second at 500 meters less. I gritted my teeth thinking I'd have to go down for half the day before going up again: I think I've said before I hate descents more than ascents. But that is the way it worked out, and there was no avoiding it.

At first there was a slight ascent to Takamine, then I began a long descent, followed the entire time by a fool with a bell. Bear bells are very popular in Japan, even in areas with as much traffic as Shinjuku station. I have even gotten my own, but that is because I prefer hiking in the less popular areas; but I just don't see the need to use one when you see other humans every 5 minutes. Still, I wouldn't complain but the man had an amazing ability to stay just a perfect distance behind me that I couldn't lose him, and yet he only once passed me. His bell was distracting, and it followed me like Jason Vorhees for the 4 hours I was climbing down to Hirogawara, the beginning of the climb to Kita-dake.

But about an hour from the bottom I was distracted from the distracting bell. I caught up with a man who had started the day in front of me, moving at a fair pace, but had slowed down near ten o' clock. He was friendly, and we chatted a bit as we climbed down. We went at about the same pace, and though we didn't talk about much in particular, we'd say things like "be there soon" or "be careful here," etc. I normally avoid conversation in the mountains, but maybe the Jason bell had acclimated me to society again. At least I forgot about the bell.

When we reached the valley, we started talking a bit. He was a carpenter from Wakayama who built traditional-style buildings and furnaces. I thought that was interesting. He asked me what I thought of the Mayan 2012 apocalypse; I told him I didn't know much about it, though I was curious. Then he told me he had had a dream long ago of a plague of locusts and of people being pulled up into the sky; this made me a bit leery. But he had never read the Bible and, though I didn't ask, I'm guessing he'd never read the Left Behind series. His manner was self-deprecating and, unlike other people I've met who go into these odd sorts of conversations, he had no agenda that I could see; it sounded more like he was sharing his pastimes. So I continued talking to him.

Then he said, in a very charming way, (keep in mind this is in Japanese) "I think I might be a space man." I laughed; again, I would normally start winding up the conversation at this point, staring straight ahead and walking a bit faster. But he was not threatening in any way, so I continued to listen.

Just like the dream of locusts and of people being pulled into the sky, he had had a dream, he said, where he found himself looking down on the earth from above, thinking "I'd like to live there..." He then found himself being born. Because it was in Japanese, I'm not sure if he was saying this was a memory of a dream or a dream of a memory, but I think it was the latter. He asked me if I thought I was a spaceman, and I considered this for a second.

I am quite in love with the solar system, and with stars. I've always had a particular fascination with Jupiter and, more recently, his moon Europa. Jupiter is a fascinating object, so incomprehensible, and a lot like the mountains of the world, so far removed from the money-making survival and bureaucratic politics of daily life. But it is none the less real; maybe, to my spaceman friend and I, those things are more real than the pretend dramas of daily life.

I long wanted to travel to the other planets, and when I was a kid I loved poring over books that portrayed life and colonization of other worlds. But as I've gotten older, I have turned back to earth, and the compulsion to find other worlds is looking less and less like a creative act of imaginative expansion and more like a desperate way to leave behind our failures here. For the time being, the Earth seems enough to me, and I'd rather not be able to see bases on the moon, reminding me of our collective short-sightedness, when I look up at the night sky. (By the way, though the two ideas coincide, I am not making an environmental argument here).

My spaceman friend was not going to the top of Kita-dake; we were walking to the bus stop as this conversation was going on. He was planning to go to Senjo ga take, a mountain I thought I might reach the next day. We said perhaps we'd meet on Jupiter some day, and I left him and headed up the mountain.

On the way up I debated over and again what I should do the next day. I had planned, as I said before, to go in a spiral around to Kaikomagatake, but it was looking more and more like that would not happen, so I was considering just hiking around Kita-dake, taking it easy the next day.

In the end I settled on a campsite near the peak of Kita-dake; I reached it after 11 hours, and I didn't feel like climbing Kita-dake and then hiking another hour to the next campsite. At that point it was getting dark and clouds were overtaking the peak, so I decided I would climb to the top the next day and watch the sun rise. Depending on how I felt at that point I would decide what to do next.

The mountain hut/campsite was high up--3000 meters, or 9800 feet. It was rocky, but the ridge was fairly wide, and there were a large number of places to set up a tent. I wandered around for a bit, hoping perhaps I could avoid sleeping inches from others, and I saw an adventurous camper had set up in what seemed a bit of a legal grey-area for an acceptable camp-spot. It was far from the toilet, but I decided to set up in the same area, though I gave my adventurous friend a wide berth. I was relatively alone.

I was exhausted and it was very cold, so I planned to watch the falling sun, eat a bit of left-overs (ie, I didn't have the energy to cook), and then head to bed. I took some pictures of the sun until I couldn't stand the cold wind, ate, and studied the map for the next day. I was soon cocooned in my sleeping bag. 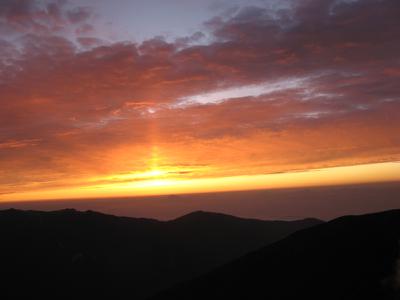 I woke up at 12 am. I don't know what woke me up, but I never did get back to sleep that day. I felt perfectly warm, and there was no light; I didn't feel hungry or thirsty. I was still exhausted, but could not sleep. I tried stretching, and reading, and I even ate a little something to see if that would help. But nothing did, and I sat in my tent until the sun came up.

The sunrise was spectacular. Though there was a bit of cloud cover and I couldn't see some of the smaller mountains, at my vantage point I was able to see through a clear space to Mount Fuji. I felt a bit like I was on Venus; I was certainly a long way from home. I took a few pictures, then lay in my tent again until the winds knocked the tent down.

In the end I decided to go home that day. Once I started hiking again I felt a bit more energetic, but I was truly exhausted after four days of inadequate sleep. After hiking 11 hours the day before, four hours' rest was just not enough, and I didn't want to deal with the occasional frustrations inherent in hiking in that condition. I climbed to the top of Kita-dake, then took a different route down than I had taken up the day before (that was a few hours' hike in itself), then got on the bus and the train home. 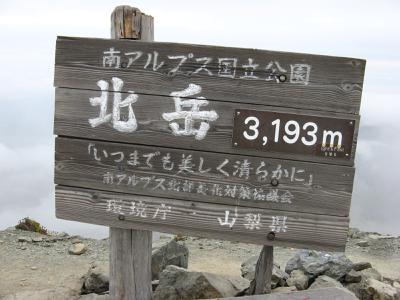 I wish I could have continued, as this is likely to be the last long vacation before the snows, but I do feel satisfied with my trip. Ho'o sanzan in itself was worth exploring, and Kita-dake is the tallest mountain I have yet climbed. If you want me this winter, I'll be jogging through the (much shorter) mountains of Okutama and Nikko!