This is the first entry from my trip to Nagano, from August 8.

Today worked out very well. I took a route I hadn't planned on, it ended up far better than I imagined. I'm writing now from a site adjoining a yama goya or "mountain hut", though "hut" is inappropriate for some of the elaborate halls that line the tops of mountains in Japan. A stream is rushing by very near the site, and I have a perfect rock to sit on where I can write and watch the flow. 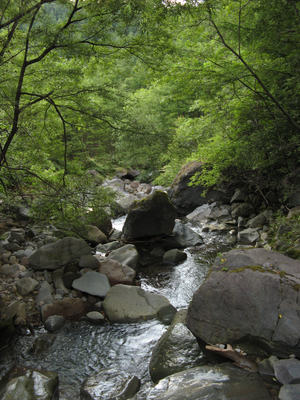 A 6:30 train meant an early start--for two days in a row I've woken up at 5:30. I'd packed the night before, and most things were ready. Unfortunately I didn't manage to get anyone to take care of two new plants I'd bought just a week before--we'll see if I come back to brown stalks [the plants were fine, and one was even unfolding a new branch when I got back]. I strapped a weatherproof bag packed with my tent, clothes, and dry camp food onto the rear rack, clipped in my front bag, climbed into a larger than expected backpack, and headed out at 6:20.

Yes, 6:20. It takes me about 7-8 minutes to bike to the station, but 2-3 minutes to package my bike (trains require that bikes be covered to avoid damage to the car or oil smudges on fellow passengers). So I missed the train--though my phone said it was exactly 6:30, there was no evidence of the train when I passed the ticket gates. Indeed, the train must have left seconds earlier.

Tired and easily irritated, I cursed my luck (not too loudly, there were plenty of passengers waiting for other trains who might hear me) and went to the platform. I had one unplayed card--I'd have preferred to take the private train I'd just missed all the way to where I could transfer to the train headed to my destination, but I also had the option of transferring a couple of times on the JR lines to go to the other side of town and catch the same train there. I had rejected this option because it would be early rush hour and I doubted I could get on the Yamanote (pronounced yama no te), a line that encircles Tokyo and has a daily ridership in its one route almost as large as the entire New York Subway system. Three large bags, one filled with a 12 kg bike, surely wouldn't fit?

To my surprise, both the Joban, a commuter train that drops truckloads of folks from Northern Chiba on Tokyo every morning, and the Yamanote had quite a bit of free space. Once in Shinjuku, I jumped on the Azusa rapid for Kobuchizawa, and I was off! I wasn't able to get a seat, but my bike makes a fair chair when folded. I was exhausted but couldn't sleep; still, the two and a half hours were over quickly. 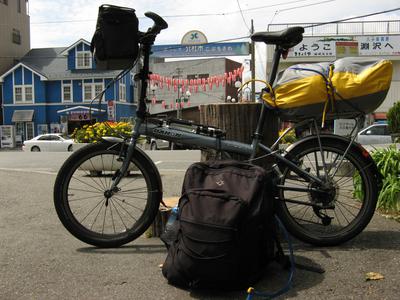 I soon set out, but immediately found a problem: I am horribly out of shape. The slopes around here aren't quite as bad as on the way to Lake Chuzenji, but I was quickly winded and had to walk. I blamed lack of sleep, and that certainly must have played a part (as did the extra 40-50 lbs in baggage), but honestly, I am just not that fit at the moment.

I pushed on after walking the bike for a while, until I hit a turnoff for Kannon Daira. The name interested me (some may know the Chinese name of Kannon, Kuan Yin, better), so I stopped to check my map to see if I should push on or go up that way. I soon discovered that the plans I'd made just didn't make sense--I'm not sure why, but I had focused on the east side of Yatsugatake, never considering the west side. But since the other places on my itinerary were on the west side, I would need to go in an unnecessary loop up north and back west, since there are only hiking passes in the main part of the mountain chain. I didn't like this when I was planning, and I even considered carrying my bike up the mountain if that were possible. It somehow never occurred to me to just take the western road when it forked north of Kobuchizawa.

I quickly changed plans and headed back down the slope (a pleasant change after an hour of climbing hills!). When I turned the correct way, the whole feeling of the day changed. I had been thinking it would take 2-3 days of riding (especially at the pace I was going) to clear Yatsugatake and headed on to the Japanese Alps, and a stop for a day's hike added another day and a half. That burden lifted, I was now looking at maybe 3 days to clear the mountains, including hike! Of course, riding through Yatsugatake for two extra days wouldn't be such an awful thing, but I just didn't like it. The change improved my mood a hundred-fold.

Also, the steady upward slope of the eastern path was replaced by a far more enjoyable up and down. I was able to pedal with all my might, knowing I would soon get a rest on the downhill. And I made time. Even more, there were a good cluster of camp sites and mountain huts in this direction, so there was a good chance I'd find something quickly and for not much money. This was perhaps my greatest concern, and here it was resolved in a flash.

I decided to push my luck a bit--I headed for the mountain I'm currently staying in. The cluster of huts I saw were managed and had amenities like a hotel and cost similarly. There are campsites attached to the huts usually, and this is what I planned to head for; I noticed, though, an unmanaged hut (offering no amenities and thus free!) deep in the mountains. I thought I could make it in a couple of hours, and if my luck didn't hold out and the hut was occupied or otherwise unusable, I could still make it to the other huts before dark. 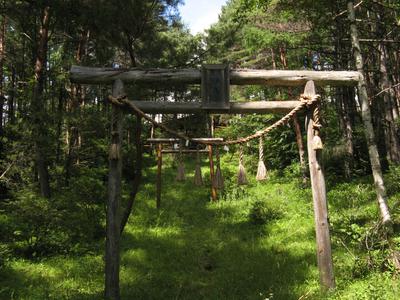 The road here was magnificent. After I passed (walking my bike up the steep hill) several rented villas, the houses turned into trees, and I could hear a river rolling by below. I was able to see the peaks of Yatsugatake through tree cover, and the view excited me all the more. 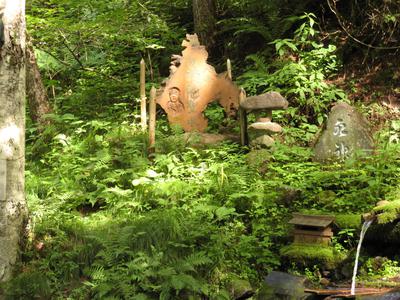 Along the way was a mizuba, a place certified to have clean water and good for filling up water bottles before a big hike. This is a great feature of Japanese mountain trails, though there were many times I really could have used more water! 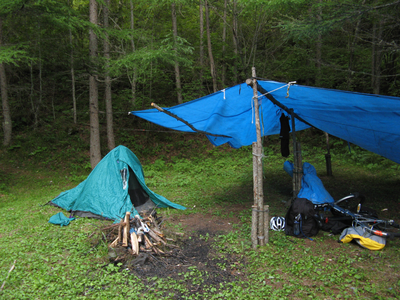 Finally I reached the hut. The hut itself was a mess, and I don't think anyone has been inside for a long time. There is a tarp down the hill a bit where someone has chopped new wood to make a fire (and obviously failed)--I put my tent up there. Now off to an early bedtime!