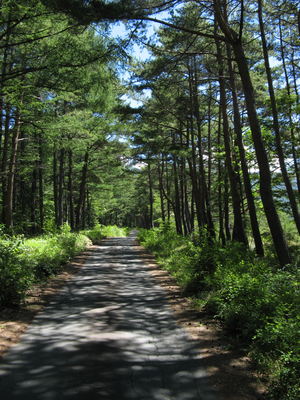 An adventurous couple of days. The day after the last entry, I went for a hike. I was hoping to climb Akadake, the highest of the peaks in the range of Yatsugatake, but time quickly became a factor. I started a bit late, tired after a strenuous day, and soon got lost. I assumed a sign reading "hiking course" in Japanese meant that was the way to go, but after about twenty minutes of descent--into what looked a lot to me like trespassing on the villas I'd seen the day before--instead of the ascent I expected, I decided I was off. I hiked back up and took a fork the other way. Not five steps on, but still difficult to see from where I'd taken the wrong road, was a sign showing the direction I wanted to go. I laughed.

The first part of the route was rather long and strenuous. I thought at first I was just out of shape or maybe tired, but on the return trip I realized it really was a fair hike. Still out of shape, though.

After finishing the first part, I began to give up on climbing Akadake. That first path, with the little side trip, had taken two hours, at that rate I would have to spend a couple of hours on my way back in the dark, something I've learned to dislike doing. But I kept up hope until I saw Amidadake, an intervening mountain almost as tall as Akadake (Amidadake is named after Amida, the Buddha presiding over the Pure Land who allows entrance to anyone who speaks his name enough times). If I could climb that, I would be quite satisfied: it looked impossible. But I did make it and I am satisfied: the view from the top was fantastic. Rather better than from the top of Akadake as I could see Akadake itself as well as Tengudake with its dual crown, the other, lesser peaks of Yatsugatake, and ol' Fuji-san himself, so incredibly imposing from any viewpoint. Here there were the thin, horizontal clouds covering Fuji in strips that I recognized from woodblock prints of two centuries ago. My camera doesn't do it justice, but... 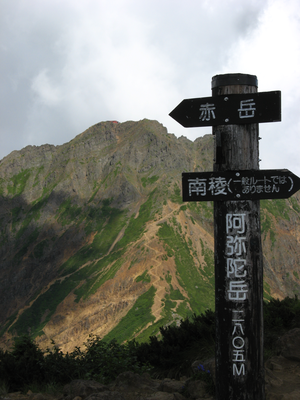 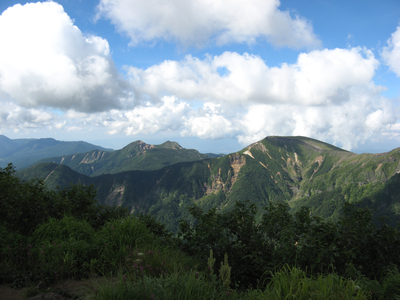 Yesterday was a wash, and yet in the end I guess I'm glad it worked out as it did. When I began riding, a noise that had begun a couple of weeks before began to really sound like trouble. I decided to continue to ignore it, but I couldn't ignore the fact that one of the brake pads I had installed the day before the trip was digging into the front tire. In trying to fix that, I tore the cable connecting my wired computer to its speed and cadence meters, effectively turning it into a watch (it shows the time when not connected to the meters). I knew I should have gotten another wireless computer given the practical realities of a folding bike, but I didn't like the other options. Oh, well. I somehow remained remarkably calm about the computer, most of my angst focussed on the brake pads and the slowly growing creak coming from the front of the bike.

Finally, after about a half an hour of fiddling, I got the brakes in line and headed out, but the noise wouldn't go away, and it began to feel like real trouble. I thought it was the stem (the vertical part that holds the handlebars) complaining about the extra weight from a bag I had installed--in fact it was a set of ball bearings in the front hub. I didn't learn this until later, though--all I knew was that the hub was shimmying up and down and that I had to get it replaced or my ride was over. Instead of heading for my next destination, Utsukushigahara (say that ten times fast) meadowlands, I went for a city called Chino, a city in the valley.

I was angry and a bit worried, and really had no idea where to begin to look for a bike repairman. Tokyo has one on every corner, but they are usually only equipped for shopping bikes. Chino didn't seem to have any--I searched for an hour or so before I decided to try my Japanese on a stranger. I asked a gas station attendant where one was. "500 meters that way," he said without pointing. I went in the direction he was facing, but found nothing. I sailed past him, going the other way, to ask the next person. I went to a convenience store to get some food and ask for help there. This saved the day--I had passed the perfect shop just seconds before.

I was heartened to see Dahon folding bikes there, as this meant they would very likely have parts available to solve my problem. I was correct that a normal shop would be no help: I found out later that Dahon front forks are narrower than regular ones. Whether this means non-Dahon or non-folding, I don't know, but I was lucky in any case.

But before we started talking about hubs, he showed me the problem--my front bearings had been turned into powder. I don't know why it happened, and so, of course, am worried it will happen again, but in any case it would require either a couple of days or a quick fix replacement of the front hub with a non-quick-release one. I opted for the latter, of course. The owner put all of his other work aside and quickly replaced it for me, charging me only for parts. 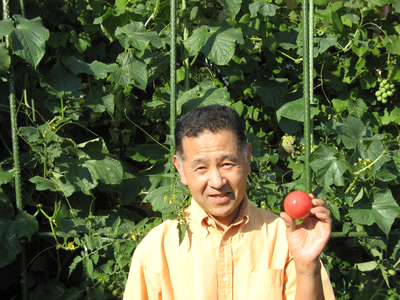 The shop owner's name is Iida, and he was extremely helpful and an interesting man. He had travelled the Tokaido road (a historical road that connects Tokyo and Kyoto) from his home to Tokyo by bike just this May, watching for the markers spaced 4 km apart along the way; he had been in a downhill mountain biking race just the month before; he was in his sixties. I hope to be as healthy as him at that age.

After he painstakingly fixed the front wheel and reset the brakes, front and back, then aired the tires to 70 psi, as they should be (they were at 30!), we chatted a bit, and he offered me some tomatoes and cucumbers from his organic garden. I had only had freeze-dried meals for two days, so fresh fruit and vegetable tasted fantastic. He told me that, though it was officially forbidden, I could stay in the park lining the Suwa Lake just a bit north. I hoped it wouldn't come to that, as I wanted to get to a campsite on my original path before the end of the day, but I filed the information away as a last resort.

I tried my best to get to the campsite--for two hours I struggled uphill, sometimes walking, sometimes riding (my homemade chainwheel change, reinforced to avoid my Nikko troubles, has definitely come in handy, but on some of the steeper hills I get winded walking). When I met up with a road taking a more scenic route I had skipped on the way up, I decided to give up and take that road back down. I'd check out the park there; then, if I couldn't find a good place to camp there, I'd head down to the lake and look for a site to sleep. It had a great slide, one of the longest I've seen 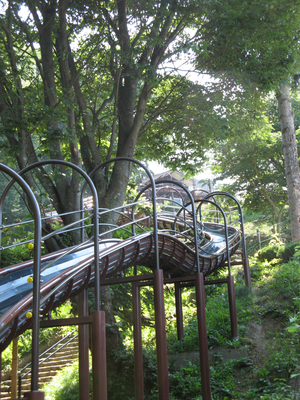 In fact there were some nice spots at the park, but I felt uncomfortable at this point, and ended up riding down to the city of Suwa. It just happened there was a fireworks display that night [in fact the display was one of many that week, in preparation for a huge display later in the month], and I was treated to a Taiko drums session just before that. After, I headed to the far side of the lake to find a spot, ate a convenience store meal, spread out a sleeping bag, hoped the somewhat ominous clouds to the south would dissipate, and fell asleep after a couple of hours listening to the cars whizzing by about 20 meters away. 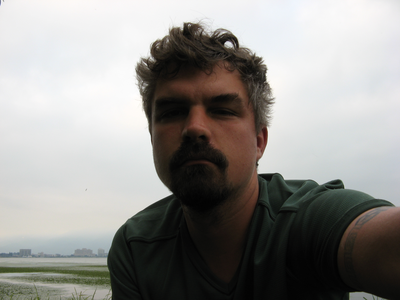 Despite all that, I feel pretty well rested--today I hope to attack that hill again, then make it a bit farther to a place I might have made it yesterday had luck been a little kinder.