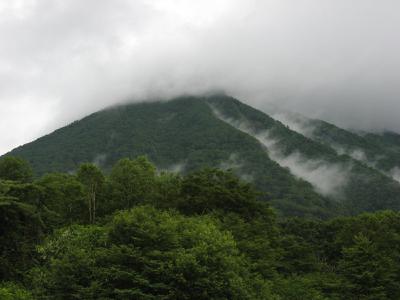 Okay, now I attempt to catch up with things that have happened the past month. I've just come back from a trip through Nagano, where I biked and camped for a week. It was quite an experience, and I have pictures and entries to put up here; however, that will have to wait. First, Nikko!

This was written mostly in the middle of July.

I returned to Nikko two days ago [July 16th]. I had been planning to come, somehow buying a new gear-ring for my bike to make climbing the hills a bit easier, but the time came closer and I had no free time to stop by a bike shop. But then nature intervened.

While having an after-class drink with students on Saturday, I received a call from Headquarters--the strong typhoon that had torn through Okinawa and southern Japan was threatening enough to call school the next day. For the first time in my life I had a typhoon day.

And I needed it. Besides the gear, I planned to get camp food, some better cycling clothes, as well as look at some other upgrades for the bike in the near future. But more than anything I needed that new gear-ring.

As it so often does in this city, it took all day to find the item I was looking for--you can find anything in Tokyo, but you need time to find it. I also bought a rear light and a rack for the bike, as well as bike shorts (I wear shorts over them!) and some great separable pants.

I ran into some problems with the chain ring that I'll explain later, but I it turned out to be a workable but flawed solution. I'll just say for now that I put the bolts on loose, never a good idea on something traveling at high speeds for any length of time.

Anyway, armed with my extra day, I was ready on Monday to head for my second trip to Nikko. I loaded up my new rear rack with a sleeping bag, then threw tent, water, food, cooking set, clothes, and other odds and ends in my back pack. It was a heavy setup for just a few days, the clothes being far heavier than I anticipated, but I managed the whole trip, even a particularly strenuous situation I'll explain later. 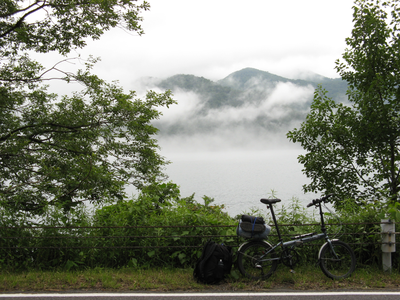 Pretty pleased with my preparations, but very tired, having only gotten about 4 hours sleep, I set out the next morning for Nishi Arai station. Once again I took a rapid train to Nikko. I decided to get off early--I wanted to get a camping lantern and decided to stop off in a town called Imaichi to look around for a sports equipment store. I didn't have any luck and decided to just continue to use the bike light I used a year ago in Okutama. I've used the same batteries as the ones I feared would run out on Mt. Mitake for a year and a half and they still haven't given out. 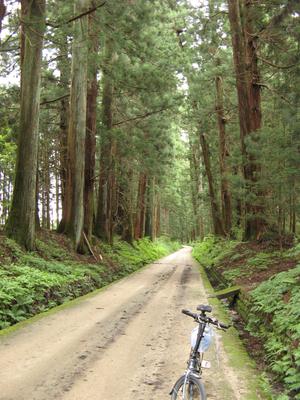 So I set out from Imaichi when it started to rain. Rain was a frequent, if not completely overbearing, companion. This time, as others, the rain was only enough to cool me a bit and didn't do much to my new pants or rain jacket.

I soon discovered a serious problem--one that might have ended the trip right there. It was the first of a triad of losses: I had lost two bolts from the chain ring I had replaced for the trip up the mountain even before I began my ascent. Under tension, the bolts had unscrewed and I was close to cracking the ring itself. One more lost bolt and I would have been in trouble--there are five bolts on your average chain ring, and though with three left I can make a triangle that will keep a tenuous hold on the crank, two wouldn't provide enough support.

There was no way I was going to stop, though, so I made my triangle shape and hoped for the best. Occasionally I checked the bolts and tightened them, and using this technique I almost made it to the campsite before it broke down again.

In the meanwhile, I worked my way up the iroha hill I explained in a previous article. It was true the smaller chain ring made things a bit easier though this time I was carrying a much heavier load. I didn't need to stop as much and the climb went much quicker. As I was struggling my way up, I was shocked to see first one, then another, runner puffing his way up the hill. It is something like 600 meters vertical distance over 6 kilometers, which is a fair slope. These guys were taking it at a good speed and passed me during one of my many stops. They reached the top well before me, and were on their way back down well before I got there. Quite impressive. 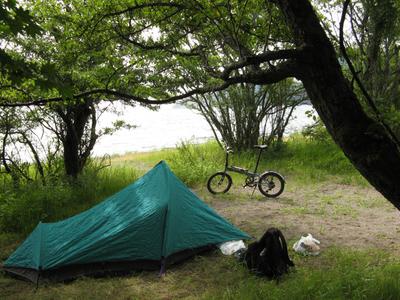 The camp site was indeed quite empty, and I selected a spot far back from the front gate, about 10 feet from Lake Chuzenji. I put up my tent, then headed for the town to pick up dinner if I could. I was happy to find a small grocery store just about to close. The owners were friendly, and I visited a couple of more times during my stay there. After a fifteen minute ride back to the camp and a meal, I was off to bed.

The next day I headed for a place I had marked for a climb--the main purpose being to hike to a camp site further into the park, in Okunikko. On the way, I passed through a meadow, Senjogahara, which reminded me a bit of Yosemite, and took a few photos. Though it can't really beat Yellowstone or the Grand Tetons, it was nonetheless pleasant.

I started my hike just north, past Yunotaki, a waterfall being enjoyed by a number of elementary school students. 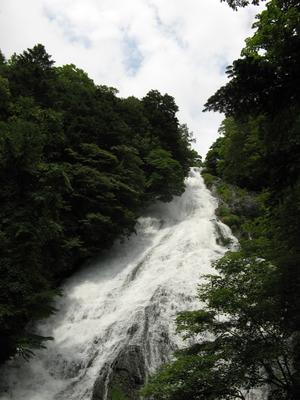 Across a bridge there is a nice, easy hike around a lake, and then on into a ski area. This begins the approach to Mt. Shirane. Not a particularly beautiful view, and the ski lift mars the mountain meadow. After passing the ski slope, the trail becomes noticeable steeper, until you are crawling hand and foot up the side of the mountain. This was not what I had planned for the day, and though I felt somewhat defeated, I turned back and returned the way I'd came.

I'm not much of a mountain climber, and it is really the mountain plateaus that I enjoy. I was led back to the Senjogahara meadow, where I found there was a path leading through thick meadow growth, and felt as if something had been throwing obstacles in my way to show me this place, where I really wanted to go anyway. 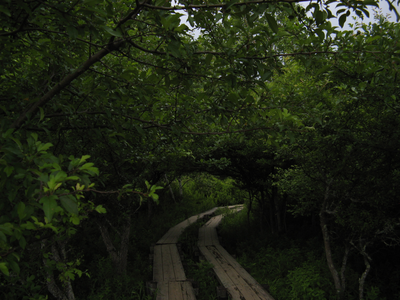 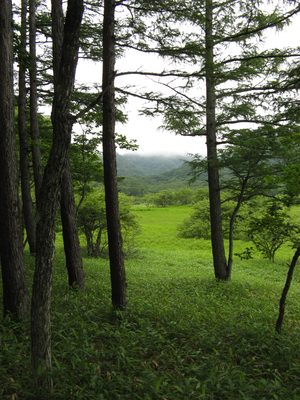 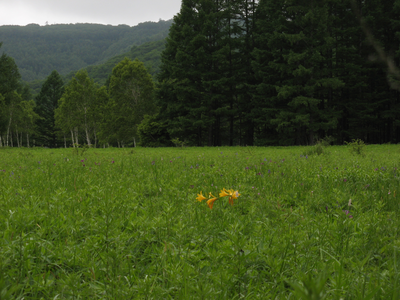 I lost the cheap map I'd brought with me, it somehow falling out of my jacket pocket on the way back to the camp, marking the second of the trio of lost things from the trip. My final day I decided to go for a short hike in the southern part of Chuzenji, and here I lost the last of the triad.

First, though, some explanation. I invented a new form of extreme sport, or stupid sport, or whatever, about half way into the day. I hoped to climb a hill on the hike, then ride my bike down a mountain road at the top of the hill. As you might guess, this requires carrying the bike up to the top. Being somewhat naive and masochistic, that is what I tried to do. I'd hoped the slope would be short and manageable, but I was quite wrong. It took a ridiculous amount of time to climb the hill, and there were many places where it was a bit dangerous to be lugging a 12 kilogram bicycle. I finally ended up giving up on the mountain road, and took another path down and headed back to Nikko city and home.

Along the way I lost my bike computer. I searched for perhaps thirty minutes for the stupid thing, but never did find it--I imagine it is still lying just out of view under the dense growth. 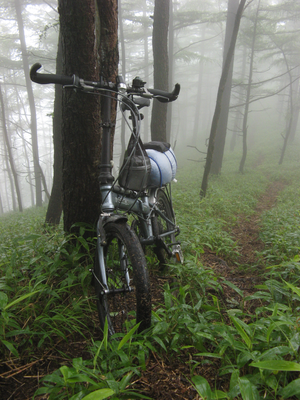 I enjoyed the trip, especially the second day. The meadows of Nikko are magnificent, and I hope to do quite a bit more hiking and biking there.