Today was the reverse of yesterday.

I slept well (enough) and long, but felt awful all day. I kept waiting for the energy of the day before to kick in, but despite a great tailwind and less significant hills, I trudged sluggishly through.

Nothing special happened until I got to Windsor, about half-way to Knob Noster. On a bend in the highway there, an old lady sitting under cover of her garage and watching traffic go by flagged me down while I was reading my map. She was a nice old lady, I'd guess in her early 80's. She told me the story of when she lived on the farm and had a horse she'd raised from a colt that could rustle cattle itself by kicking them with a hoof when they got out of line. She told me about riding the horse to school, and how a man had offered her $200 (a hefty sum for a horse at the time) but she'd refused. I learned everything there was to know about her horse in a remarkably short time--a good storyteller. When I left her she crossed her fingers for me and wished me good luck.

Armed with my new map from the lucky day before I was able to avoid the major roads, and found a pretty good highway with pleasant scenery. I followed it most of the way to Knob Noster.

The friendly host at the campsite told me another cyclist had been through the park, but he had set out from San Francisco on his way to New York. She said he didn't speak much "American", so I wondered if he was English and just hadn't mastered our local dialect, or if it was a more international matter. I didn't inquire. 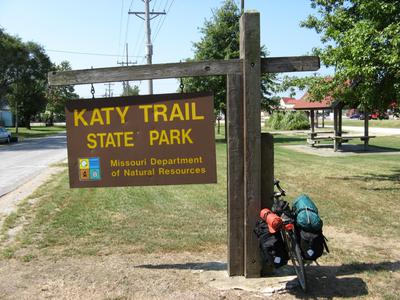 I also passed by the Windsor trailhead of the Katy Trail, a 225 mile-long trail from central Missouri to the outskirts of St. Louis. I passed through Clinton, the current westernmost entrance, a few days earlier, but forgot to visit the trailhead there. Like the Prairie Spirit trail I rode from Ottawa, KS on my way to La Cygne, the trail is made of crushed rock, and not much to my liking for a long ride, but unlike that trail it appears to be free, with many local businesses catering to cyclists lining it. I didn't ride the trail, as I was headed north and it is laid out primarily east-west, but perhaps one day.

I'd heard good things about Knob Noster, but I've found it pretty mediocre. It is next to a highway, a train line and an air force base, so it could hardly be called "secluded". It's a lot like a city park, if that city had streets that posted 55 mph speed limits and allowed RVs in its city parks.

Apparently Knob Noster is restored to a more natural state from some sort of industrial mining, but its recovery is still underway. Many parts of the park are under rehabilitation, and perhaps the biggest draw, the equestrian/mountain-biking McAdoo trail at the southern end of the park, is closed "until summer 2010" (since that has passed, I'd say it should read "indefinitely"). If it wasn't a convenient point between HST State Park and the eastern Kansas City area, I'd avoid paying $13 to stay there again. It might be of interest to fishermen (motorized boats are not currently allowed) or military enthusiasts interested in the base next door. I'm sorry to complain about a state park, as it's better than it being a coal mine, but I was disappointed...

A bit of light-play and some thunder and finally, finally the rain has come at bedtime. I hope tomorrow is cooler because of it, I've got a long day ahead of me. Around 95 miles predicted, but always comes out to be more, so I'm hoping to get an early and energetic start.