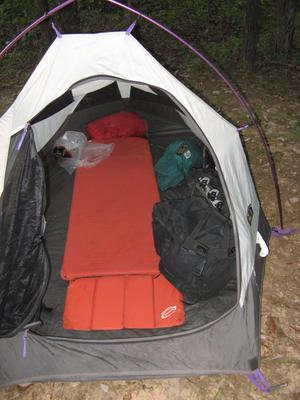 The light-play and thunder turned into some serious business. My tent is old and poorly taken care of, but beyond a little spray now and again, things seemed to be alright. However, as time passed the lightning drew closer, until I became increasingly uncomfortable lying on the ground beneath a stand of trees. Lightning struck, lighting up my tent, and not seconds later the crash of thunder, muffled by my rain tarp, then lightning, until it was so constant that I could not tell how far away the storm was--it felt that lightning would strike a tree at any moment and fry me, and that would be the end of my trip and life. So uncomfortable did I become as the lightning and accompanying thunder grew closer and closer that I decided to make a run for it. I decided to weather out the... weather... in a shower facility nearby.

When I had set my tent up, the flattest spot I could find was near a fire pit. I never light fires when by myself, only using my camp stove, so it made sense at the time. But as I took flight for my life, I noticed the pit had filled with rainwater and was about to overflow. I was so nervous about getting electrocuted, though, that I wasn't willing to do anything about it at that moment.

The storm--the first of three that night--calmed, and I walked back to my tent to find it had, indeed, flooded. Normally I would lose it at this point, and I did a little, but I quickly realized what was done was done and I had to empty out, move and dry the tent before another storm came or I'd never get any sleep.

Fortunately, my down sleeping bag wasn't wet and my mat sheds water, so I knew I could sleep once I'd toweled out the bottom of the tent. In fact, nothing except a few brochures from state parks was really damaged, so I'd escaped relatively uninjured.

More storms came, but once they were gone, I managed to sleep fitfully. I felt sleepy the next morning, but was ready to move as soon as I could dry some clothes and the foot of my sleeping bag. The sleeping bag had gotten a bit wet while I was sleeping, but I was able to dry it in the laundry (all Missouri State Parks seem to have onsite laundries) and hopefully no permanent damage was done.

This was my last long day, a mixed ride to Watkins Mill, northeast of Kansas City. I say mixed because I'd planned to take as few mega-highways as possible, but couldn't see my way around them totally. In fact, fate and the Missouri DOT had very specific plans for me, it seemed, plans that worked in my favor.

First was a closing of MO highway 23. I still have no idea why it or any of the other roads were closed, but because of it, I had to abandon plans to take a route that was longer but mainly utilized smaller roads. Instead, I followed the nasty highway 13 most of the way.

Some roads in Missouri have rather large shoulders. Some, like US 54, have shoulders that are entire lanes to themselves, where it feels like I'm riding alone with occasional breeze from a passing truck to remind me I am, in fact, sharing the road like the sign says. But most of the roads have no shoulder, a tiny, useless shoulder, or a tiny shoulder made useless by a dominating rumble strip.

Along the route I rode, MO highway 13 has all of those. Of course, none of that matters if there are no cars, but 13 seems to be quite popular. It was my least favorite part of the trip, roadwise, to this point.

One good outcome of riding 13, other than saving some time, was running into the first (and the only) traveling cyclist of the trip. I'd heard stories of a young woman who rode highway 7 (another nailbiter with no shoulder) in 109 degree weather, as well as the cyclist not fluent in American, but I'd yet to meet any.

Wayne Burton was traveling from Fairbanks, Alaska to his home in North Carolina. He must have been in his sixties, but loaded with no less equipment than I, he seemed to be setting a pace I couldn't dream of. He was headed from St. Joseph, far north of my destination for the day, to Jefferson City, far east of my starting point. I could be misremembering, as that is over 200 miles in one day, but I believe that is what he said. Perhaps he was eager to get home.

We chatted on the side of 13 despite the madness, swapping stories, then wished each other good luck. He was a nice man, and he gave me confidence that I'd be able to enjoy a long future of travel.

I reached I-70, the first road I was at all familiar with since I had left I-56 in Kansas almost a week ago. I found it strangely satisfying to have reached it, though I can't and wouldn't ride on it. I took pictures from an overpass as the semis honked at me from below. 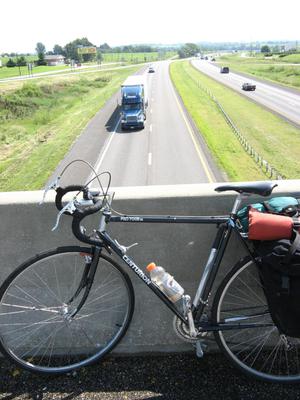 I met another biker at a rest stop just north of I-70. He was not (yet) a tourist, but had a job ending soon and hoped to take a long trip then. He said he did the MS150 every year, no mean feat.

Near the end of the road for the day was Excelsior Springs, maybe the largest city I'd visited in Missouri. It was a pleasant, leafy city with too many hills. Here there was another fortuitous road closing: MO 10 was inexplicably closed, so they had a detour that led directly to highway 69. This was fine by me, as had 10 not been closed, I would have followed it, then had to double back about 3 miles to get to Watkins Mill, all the while not knowing there was a more direct route on a secondary road. With the detour I saved about 5 miles!

Watkins Mill is an interesting place. There is a nice open space that overlooks an expansive wooded area, and I watched from there the evening star for a while before heading back to my tent and passing out. It has a nice bike path that circles a lake. I stayed in the camp site on a Saturday with families bearing astonishing numbers of unruly kids (one called me "butthead" for no reason I knew of). The camp host, coming to collect the camping fee from me, told me that bicyclists can camp next to the camp hosts' site for $5 in Missouri state parks; she later corrected herself after speaking to a ranger, who said that this was only when all other sites were taken. Still, it is very nice to know that we are assured a spot even when the camp is full--that relieved a concern I'd had the entire trip.