Strange how circumstances that should have made things miserable today worked to somehow make it the best day yet.

Last night I had Mexican food, as I said. These days I accompany nearly every meal with root beer, I guess because it was so hard to find in Japan. Anyway, I think the root beer was caffeinated, because I could not sleep at all. Every time I fell asleep, I would feel I was falling and jerk awake. It lasted almost all night, until finally, at about 4 am, I conked out, to wake up at 7:30 feeling as if I was stuck to the bed, I'd slept so hard. I was groggy but I quickly packed up and hit the road.

I looked forward to a long, painful slog. I hadn't slept well in Ha Ha Tonka and the stay the motel in Camdenton had been even worse. In fact, my muscles weren't very responsive and very sore.

But something strange happened. As I rolled on the extra-wide shoulder of US 54, I started to feel good. There's no doubt I was tired, but it was as if it didn't matter, I'd make it through. I admit that has not been my attitude so far: many evenings have devolved into childish fits as I worried about getting to my destination and grew more and more frustrated as various tiny irritations seemed to get in my way. Some entire days went like this. But while I may have been worn physically, mentally I was feeling better than I had before I left Lawrence.

About a month ago I went to the Nelson-Atkins Museum in Kansas City. It has been a long time, and I was impressed by the collection. Good for a day's outing; unlike the larger museums, you can pretty much see the Nelson's entire collection in one day.

What really a struck a chord with me, though, was the Isamu Noguchi exhibition. No, not just because he was Japanese(-American); the shape and design of his monumental sculptures may have been influenced by Japanese esthetics, but I think the appeal is much deeper than that.

I unfortunately can't find the work online, but I recommend a visit to the Nelson to see one work of Noguchi's in particular. It is basically a square made of four stone slab walls, each maybe 7-8 feet on a side. The walls have been molded and shaped using various techniques, so that you can see beyond the walls into the interior; there is no "roof" so light gets in and you can see the inside clearly. However it is not totally clear what you are seeing on the inside. "The inside of the other walls" is the logical answer, but that's not how it felt to me.

After looking at the outside, and then through the holes, and then at the holes themselves, along with the depressions and bumps on those stone walls, I began to feel agitated. Something was wrong, or maybe it was too right. Then I felt it, in the same you feel when you see the image in a stereogram, that gasp-inducing feeling that you have seen something that isn't there but is no less real.

The square of walls was the physical manifestation of the way I see my life. It's hard to communicate, but I have these obstructions, these objections to the way life is, and I've built walls such that I can no longer see through very well to what is beyond. I look at the walls now, and that is my life; but sometimes I go beyond enjoying the esthetic details of the walls themselves, of the little holes, and I look beyond, through the holes. And I tell myself, "ah, those are just more walls over there", but I know that is not the whole truth. And I stand fascinated by the mystery, but because I don't know what to do with it, I go back to looking at the greyness, the straightness broken in places by unevenness, of the walls. Because that is "reality", that is what I'm "supposed" to concentrate on. My impulse was to try to wriggle through the tiny cracks, but the laws of decency, physics, and the Nelson-Atkins Museum of Art dissuaded me before the thought had even formed. I don't particularly like the walls, the mundane, but I can't seem to find anything all that fantastic about the inside of those walls yet, and I suppose I'm afraid of finding that truly there is nothing, once the wall I'm looking through is dissolved or destroyed, nothing beyond but another wall with another tantalizing view of nothingness.

I don't think another work of art has so moved me to existential sickness. It was like waking from a dream and saying "that's exactly it," then forgetting what I had discovered.But I can still feel those walls, everywhere around me, though the funny thing is, I am on the outside.

The reason I bring this up is that it seems like there is nothing but surprise and unexpected life that creates holes, or at least the ability to see through holes that are already there, in this massive wall. For an entire day, I was looking through that wall at some other view, a view provided by unforeseen circumstances. I realize this is all a bit grandiose, and I certainly didn't describe this situation to myself in these terms at the time, but whenever I think back on it now, I see that huge wall, not there for a little while.

But back to the narrative...

My good mood of the day continued even when I ran into a gravel road. I panicked at first, but after a local convinced me it did in fact lead the direction I'd intended, I decided to give it a try. I'd learned from my experience at La Cygne that while gravel may not be pleasant, it isn't the end of the world.

I soon got lost. The area was a winding mash of roads that only locals could understand; and boy was it rural. After taking what I was certain was a wrong turn, I happened on a man bailing hay. He was kind enough to stop his motor, listen to my questions, and offer both good directions and a couple of stories about the area. I liked him. He reminded me that these roads followed postal roads of hundreds of years before; probably those roads had followed ancient hunting or game roads; a fact that is hidden under the straight, reasonable roads of large cities. I headed back and followed the right path, thinking how far this man was from the everyday I've known all my life, and how different his life must be. 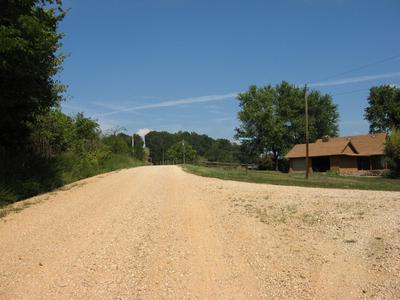 I was a little confused about the directions, and doubts stayed with me until, just as he said, I reached a brown house that stood at the intersection of the wrong road I'd taken earlier and the correct road I should have followed. This gave me confidence, but after nearly an hour of trudging through, I was ecstatic to find fresh pavement. So ecstatic I kissed it. 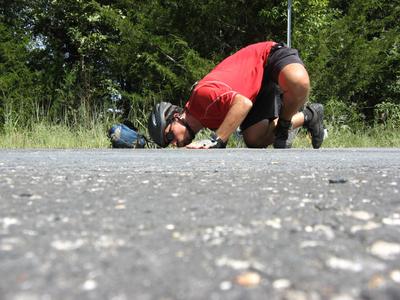 Up to this point I'd taken US 54 and the local road as a change from the road I'd taken to get to Camdenton, but now I was back on highway 7, which I'd taken before. So at the end of that local road, I was back in familiar territory. Not familiar enough, though: I thought I had enough water to get to Edwards, so I decided not to stop in Climax Springs, just east of the local road and the wrong way. It was hot, around 95 F.

In fact, I did have enough water to get to Edwards, but Edwards didn't have any services. I ended up going about 15 miles parched.

This led to a final turn of good luck that really boosted my already strangely unflappable attitude. Desperate for water, I stopped in at a woodworking souvenir shop I would never have normally visited. The place was air-conditioned, so after purchasing water and a soda, I walked around looking at the kitschy stuff and I happened to find a detailed map of Missouri in a rack of free travel brochures. I hoped to find that day a map at some convenience or auto store that would give me a better idea of the condition of the roads than the general map I had brought with me, so that I could decide that night if it was feasible to take a new route home. I took a quick look and found that every state road was mapped, so I could be sure there were roads, and that they were paved. It was a fantastic find.

So I've committed to a route north of Kansas City, then west, extending my trip by a couple of days and allowing me to continue the adventure all the way home.