I'd hoped to have a bit of a rest today, and I suppose I did, with conditions. I didn't sleep well last night, between worrying about my bike and various forest noises. At one point I heard a horrific burst of howling too close for comfort; I don't know what they were, perhaps coyotes, but not dogs, I think. They must have been welcoming the moon after it reappeared from behind a cloud. Similar things happened all night.

I slept later than I'd planned, so in the end I wasn't too badly off. I originally intended to hike the Turkey Hollow Trail, the longest in the Ha Ha Tonka park and the trail where they allow through-hikers such as myself to camp. After that, I thought I'd see what time it was and perhaps go to see the famous "Castle", maybe the natural bridge, then move on.

The Turkey Hollow Trail was very pleasant and it satisfied my hiking cravings. It wasn't too strenuous, except in parts; in fact, I recommend it to anyone just beginning hiking who wants to take a longer hike. Taking it very easy, I made the 7 miles in a little over two hours, then decided to go back over the Acorn Trail that intersects with the THT and that I had visited in the afternoon before. I took a picture of what turned out to be a water tower. 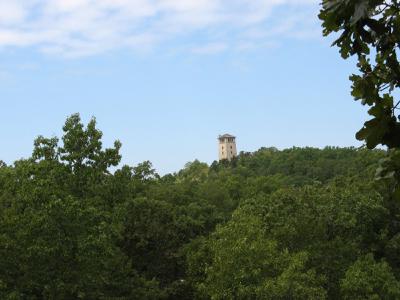 I then headed over to the Castle, the real draw of the park. There are actually a fair number of smaller trails in the area of the Castle, and I ended up doing almost all of them. But the Castle and the Spring were the real highlights. 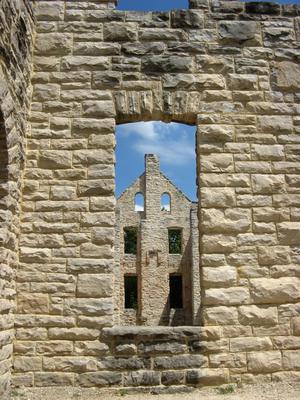 I guess the Castle was built, using local stone and timber, on the model of European castles and with Scottish masonry. The original builder never finished it, but his sons resumed work on the main "mansion", stable and water tower, and finished it years later. Twenty years after it was finished it burned down. The stone skeleton that remains was definitely worth the trip; I liked most the water tower, which can be seen from the Acorn trail, as I said before. 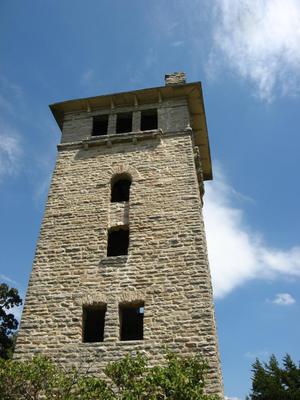 Next was the spring, the source of the area's appeal long before the Castle was conceived of. You can see a rich green layer through the clear waters, which flow first slowly, then in tiny rapids, then again grow sluggish near beaver dams. I read otters lived in the area, but was disappointed to only find ducks. Maybe dusk would have been a better time for a sighting. 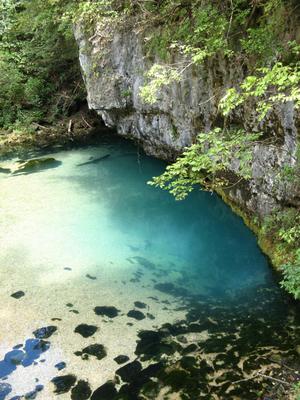 Having exhausted most of the park in a couple of hours, I went back, packed up my tent and carried panniers back to my patiently waiting bike, which stood unmolested at the trailhead. It was a relief to have the panniers locked back in, all the parts back together and moving again.

When I first arrived at Ha Ha Tonka, I saw a sign that stated there was no camping in the park; as I've stated, this is not true because you can camp as long as you are hiking the Turkey Hollow Trail. When I originally saw that sign I despaired and considered riding back to Camdenton to stay at a motel. In the end I did stay at HHT, of course, but I became enamored with the idea of spending the next night in Camdenton, capping off a relaxing day at HHT with a bit of rest before four long days of a return trip (I will most likely return via a different route that passes north of Kansas City and that will take a bit longer than my route here). The other choices were another night at HHT, which didn't strike my fancy after the coyote orgies of the night before, or a night at Lake of the Ozarks State Park, which would add twenty miles there today and tomorrow on the way back.

This was all assuming, wrongly, that motels were plentiful and cheap in Camdenton. In fact, I spent about two hours searching for a good spot and, failing that, settled for less than good after riding 15 miles up and down the unpleasant strip-mall city strip. One inn, a chain, was charging $100 for a room, so I headed back to a smaller, locally owned motel that was still surprisingly expensive. For a highway ransom I was given the room closest to the highway and refused permission to bring my bike into the room (next time I won't ask). But I'm satisfied in the end; I unpacked my gear and headed to the local "Mexican" restaurant and had a great burrito; even after hours of hiking and biking, it was too much food and I still had to take half home.

Showered and lying on a king- or queen-sized bed, I almost find the hum of cars outside the door pleasant.