Not such an easy day. Though mercifully the ride was only 60 miles, I suppose my first experience of three continuous days of riding has taken its toll. The hills today, too, were steep, and a couple of times I ended up walking the bike. I think I might have managed them on a more energetic day, but I wasn't willing to argue.

In Warsaw, just to the west of Truman State Park, I had a trio of pleasant experiences. I stopped at a Casey's convenience store, but before I entered a man came out. When I saw his walking stick I knew he'd strike up a conversation, and, indeed, he greeted me, asked me about my travels, and told me he'd walked hundreds of miles from Chicago to ???? (can't remember, or didn't catch it the first time). He then invited me to visit the 12 Tribes of Israel and gave me a newsletter. The world is definitely full of variety.

After I'd stocked up, a van full of teachers accosted me, saying they were on a scavenger hunt and had to ride someone else's bike for a photo as part of it. I was a bit worried the bike might topple on them, but I helped one woman get on the bike and they took a picture. They gave me some candy and hurried on to the next item on their scavenging list.

Finally, I found it was Warsaw, not Clinton, that had a nice downtown. It was quaint and yet multicultural--reminded me a bit of Santa Fe, though much smaller. 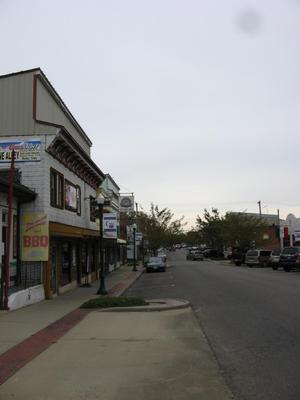 Most of the day was spent trudging through the hills. The landscape was much like rural Kansas, but with hills: farmland, pastureland and hay. I passed through Camdenton, which I was pleased to see had several Mexican restaurants. Tomorrow is to be a rest day (sort of), so I hope to stop in for a meal.

Ha Ha Tonka, just about 2-3 miles from Camdenton, was my destination for this trip, and I'm happy to say I've reached it 250 miles later. I took a quick hike before it got dark, and almost in spite of my cynical nature made more judgmental by exhaustion, I've found it to be remarkably appealing. Tomorrow I'll be taking a longer, 7 mile jog on the Turkey Hollow Trail and am really looking forward to it. 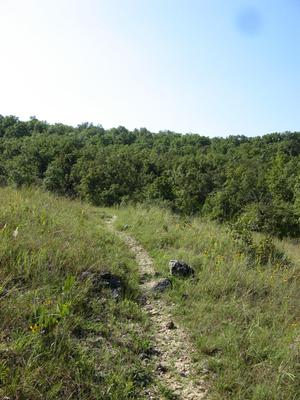 Also to some rest. Unfortunately, the camping in Ha Ha Tonka is only for through-hiking, so I'll probably end up packing up tomorrow and staying at a motel in Camdenton. It wouldn't be all that bad--in fact, it'd be quite a change for me, and I wouldn't have to leave my bike locked to a park bench at the trailhead as I did tonight. I didn't plan very well when I thought I'd stay at a hike-in campsite: I had to carry my backpack and two full panniers a couple of miles and leave my bike behind. I've considered bringing the bike to my campsite, but I'm going to leave it to fate: surely no one would try to steal or destroy a bike in a State Park? But, of course, thinking about it makes me entertain both possibilities even more.

It's noisy here. I didn't want to carry the panniers far from the trailhead, so I took the first available spot, not far enough from the road. But I'd have to walk something like three miles further to get far away from the road, and I think I'll pass. 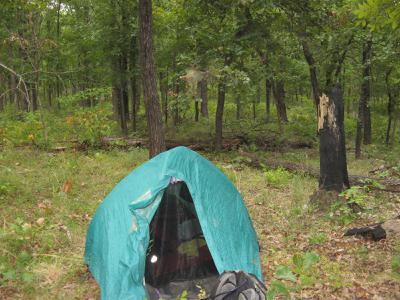 My tent is pitched over rocks and tiny trees. My mind won't leave the poor bike: after 250 miles (plus over a thousand before I left) he's proved himself to be a sturdy companion. It feels strange to leave him locked up next to the road with all those strangers' cars. Maybe I'll go get him.