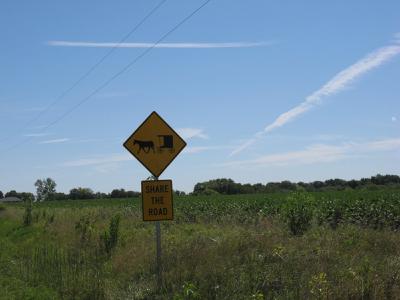 I started the day chased by dogs: those puppies the night before chased after me, whining and pleading, the entire three miles or so until the gravel was replaced by pavement. There I was able to pick up speed, but they kept following me regardless and I could hear them whining and barking after me until the next town. It really was miserable, but I hope that someone in the town will pity them and take them in.

I fought a nasty headwind the rest of the day. I was happy when I was going over 10 mph; downhills that the day before would have pushed me into the mid-twenties today required effort to get up to 15. I trudged through the unchanging scenery until I made it to the town of Clinton.

I had big plans for Clinton. It was the biggest city in a while, maybe since Ottawa; it was rumored to have a classy downtown; and I was supposed to arrive at a perfect point in my day for a lunch stop. I only had 60 miles to do today, so I thought I'd have plenty of time. By the time I'd reached Clinton, though, I realized it would be pushing it to eat at a restaurant, but I had been looking forward to it all day so I decided to take the risk.

Long story short, I never found the old downtown and spent too much time looking for it. I decided to hit Arby's instead. Actually, the ham sandwiches and root beer went down just fine and I had a pleasant chat with an employee, and I got out of there with no regrets.

I then headed on to the next stage: about twenty more miles to Truman State Park. Ah, but I took the wrong road; a four-lane interstate. Though there was a "share the road" sign, it was not a very pleasant ride. But, man, it was fast: I was headed south, so no headwind. I finally figured out after about four miles that I had taken the wrong road and headed back.

I hurried across all four lanes to the opposite side and headed north back to Clinton. After a while I came upon a stooped old man fiddling with the trailer attached to his huge, red American truck. The right tire on this trailer had blown spectacularly, but he couldn't get the jack to rise high enough to reach the bottom of the trailer. Being uninclined mechanically (unless it is a bicycle we are talking about), I was pretty useless. My brilliant suggestion was that he call someone. Luckily, a helpful man in his own huge truck came to the rescue. I watched while he put the jack under the axle of the trailer, explaining he himself had had a trailer blowout just the week before, and deftly replaced the blown tire. I think I replaced the bolts that had secured the spare. I felt absolutely useless (a third wheel, so to say), but I decided to see the thing through and did. The old man was grateful, and then we parted.

The next major milestone was halfway from Clinton to Truman Park, a city named Tightwad. I had seen the name years before and had from that time been curious what sort of city would call itself such. Apparently, a city starving for citizens: the population was somewhere around 70, with a lone (but very large) gas station and souvenir shop. I bought water, but passed on the Tightwad coin purse. 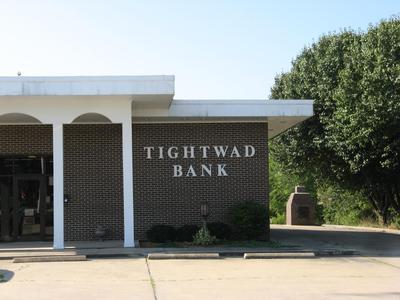 Outside Tightwad the road quickly became more hilly and forested, and I soon found Truman Park and a suitable campsite.

I was able to make food without anyone around to whine and beg, so I reconstituted some absolutely delicious black bean dip from the health food store and ate it with corn chips. I was in heaven. Then I ate a Malaysian dish mixed with camp-cooked quinoa, and was in another layer of heaven. Try eating after 50-100 miles on a bike: saltines taste like Ritzes, bananas taste like a banana split, and Gatorade tastes like Chimay. I will be eating at this restaurant again. 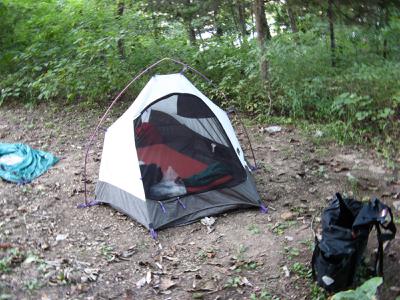 I missed the sunset in my food orgies. It's oddly warm inside my tent even without the rain flap. Once again a half moon, tonight a true half-moon, rose. I noticed it while biking, that hint of white against a clear, blue sky. I'm a bit too tired to enjoy it fully. The tree frogs echo, then harmonize, then echo. I let into my tent little bugs that look like white fairies. They don't care that they look like fairies, of course, but I think they are better than mosquitoes. I'm looking forward now to sleep, a late morning, and an easy day tomorrow (please!).