Had a rough day with the neighbor - I may write about it later, but I'd rather share some pictures.

I had a great time wandering the city again, taking pictures of the bridges. I feel much better after a few days of a cold, and it was really nice to enjoy the city again. I wish I had a better camera and some talent, because there are a million pictures to be taken of this city. For now, I hope my 3x zoom digital camera and D in junior high school photography class skills will be enough.

First, we'll start where I left off before. After the arch bridge with the blue lights, there is this, Chuodaibashi (Central Big Bridge). 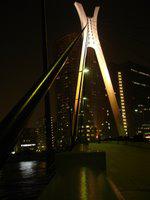 You can see it in the previous picture of the arched bridge. This is the first bridge after the Sumida River branches off to the west - there is a small island between the two branches, upon which are built the Blade Runner-looking hotels or apartment buildings shown in that previous picture.

Next is the Kachidoshibashi (Victory Cry Bridge). Well, actually, there is a bridge in between these two from which I took this picture, but it is unremarkable. I took several pictures of Kachidoshibashi, and I decided to include these two because on the one hand I like the first best, but the second shows the whole, two-arch span of the bridge. 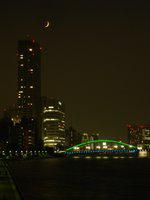 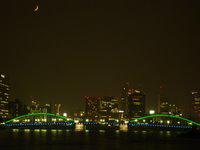 Many of these pictures were ruined by the clouds that kept obscuring the moon. At first I thought the moon had set faster than I predicted!

Finally, there is the Rainbow bridge, which connects Tokyo to the strange island of Minato Mirai (The Future in the Bay or the Future Bay). This is a sort of amusement park of the future I have yet to visit.

In any case, I wasn't all that impressed by the Rainbow bridge. I'd heard a lot about it, but I think Eidaibashi or Kachidoshibashi are more interesting. The Rainbow bridge is newer and longer, but big deal. Also, it is illuminated by green lights only, so the Rainbow (they use the English word, not the native Japanese word) is really a misnomer. There are a couple of bridges nearby that do have multicolored pillars, and they deserve the title more. Unfortunately they are not illuminated, so I'll have to take a picture during the day some time. Oh, by the way, the lights on the hanging wires (I forgot what they are called and don't feel like looking it up right now) are green. You can't tell because of the long exposure, I guess. 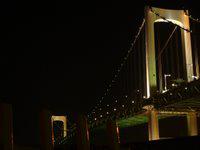