Yesterday and today I ended up in Ginza (Silver Seat - there was a mint here during the Edo era). Ginza was redesigned in the Meiji era to impress the Europeans (I hear, I may be mistaken) and I heard it was very European. Thus, I didn't have much interest in visiting it. However, I went there with my friends after the Halloween bash and really thought it was at pretty interesting place. I decided to go back yesterday, and today, as part of my continuing bridge coverage, I went through it again.

(note: please read the next article, too. Blogger only lets you post 5 images at a time, so I split this into two).

Ginza was, during the real estate boom of the 80's, the most expensive place on earth. They said you could take the most valuable denomination of Japanese paper money, fold it as many times as you could, and you couldn't buy that amount of land in Ginza. The largest denomination is 10,000 yen, about 84 American dollars, and (according to some physics book or something I read a long time ago) the greatest number of times you can fold a piece of paper (or anything) is 9 times, I think (try it - I get stuck at 7 times). You get about a centimeter at 6 times. I don't think 84 bucks would buy you a centimeter's real-estate in any of the downtown areas of any major city in the world, but hey, I could be wrong. A millimeter?

Okay, to the pictures. The first two are of the general Ginza area, the third is the view from a building in Shinbashi (New Bridge), near Ginza, and the last is of a building I thought was interesting near the Rainbow bridge - take a look at the next article if you haven't already. That building says Yokoso at the top on all four sides - Welcome. 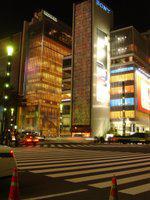 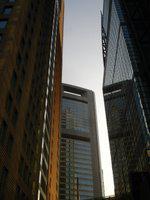 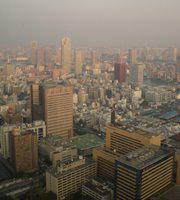 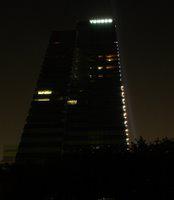