Winter has come to my home town (Lawrence, Kansas):

Winter is also falling on my trip. Appropriately, serendipitously, I ran into an article about Tokyo's famous graveyard, Zoshigaya, the other day, and since there are graves for Izumi Kyoka, Natsume Soseki, and Lafcadio Hearn there, I decided to go.

I complained a lot about it when I lived there, but I really miss Oji. Of course, it wasn't the city of Oji but my immediate surroundings in the dorm I was staying that destroyed my fun, and in the end Kitaku, the northern part of Tokyo proper, has really stayed with me. I've wanted to visit the neighborhood there again, with its tiny alleys and bonsai gardens.

As the Arakawa tram line, which stops at the Zoshigaya cemetery, goes through Oji, I decided to stop in and take some pictures of the area, both for memories later in the US and further on and also for an article on Oji I am hoping to write one day. Despite a fairly rich variety of interesting shots available, I only managed to get a few good, or at least representative, pictures.

I started in Kaminakazato ("Above middle village"). 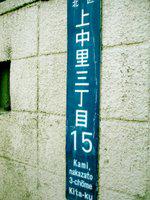 The Keihin-Tohoku line stops here just before Oji, and this is where I used to get off. I enjoyed wandering around the neighborhood, and I wandered a lot - I think only one time in three weeks did I not get lost. I got lost for a few minutes this time, too. Note: bring a compass with you to Tokyo: having one has saved me hours of trouble! 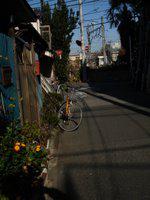 There is a railroad crossing on the way to my "old" neighborhood, and just past that is a bear. 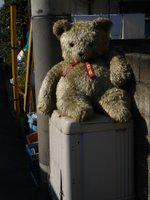 He looks a bit worn, but people take care of him. When it rains, someone always gives him an umbrella.

Next is Sakaecho (prosperity village), where I stayed. And here is the guest house. 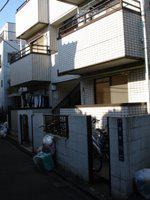 Here's a random shot (well, "carefully selected shot" is closer to the mark, but hey) from the streets of Sakaecho. 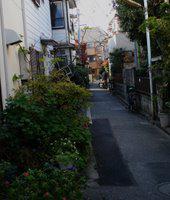 While on my trip through Kaminakazato, Sakaecho, Horifune ("Storehouse boat"?), and Oji, I ran into quite a few cats. So you know, the cat population is not controlled as well here as it is in the US, and you will often see packs of them. These, I think, are house cats, but if you go to Ueno park in particular, you will see quite a few semi-tame cats. 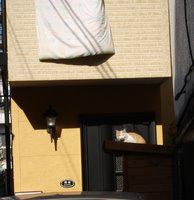 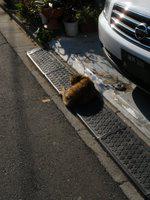 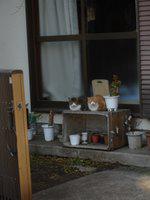 When I got to Oji, I jumped on the Arakawa train, the last tram line in Tokyo. It is, like the trams in San Francisco, slow, crowded, and fairly cheap. It is a good way to see northern Tokyo, but you will almost certainly have to stand, which becomes quite uncomfortable after a while. 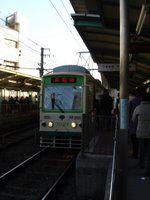 The sign says "Waseda." Waseda is the second most prestigious university in Japan, after Tokyo University. It is the terminal for the westbound trains.

It took me forever to figure out what the sign says, because the normal reading would be Hayainada or something like that. It means "Field of Early Ripening Rice."

The train brought me to Zoshigaya finally.

It is a beautiful cemetery, and it reminded me that funereal ceremonies are the first material evidence we have of ancient religion - that, as far as we know, culture begins with funerals and the ultimate mystery of life, death. Thus the sense of wonder and connection to the past that descended on me as soon as I entered 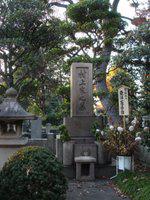 This is the grave of a certain Murakami family - I don't know which one, as the Murakami name is fairly common. I chose it because of the beauty of its surroundings.

It took me a while to find my bearings and get a map - the cemetery isn't exactly huge, but you definitely need a map. Luckily, all the famous people are listed.

My first stop was the grave of Izumi Kyoka, my idol, mentor, subject of study, source of confusion and frustration. I thought he was fairly unknown, as he is far overshadowed by other authors such as Natsume Soseki, also buried here. But he has been easy to find. And I don't just mean because he's dead and thus doesn't move much- he has shown up numerous times during this trip: most notably, on my first trip to the book district in Jinbocho, and in my conversation with the director of the school I interviewed with last week. 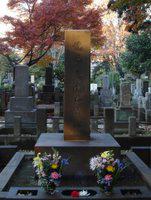 Seeing his grave was very moving. In some way I felt it crossed the hundred years between his books and myself to be at his tombstone. I decided I needed to do something to commemorate the occasion. I went and bought a bouquet and incense, and though his grave had been visited recently and someone had put fresh flowers in both votive vases, I took the two colors essential to his writings, red and white, and floated them in the middle basin. 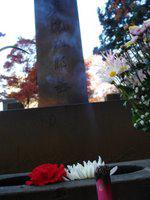 I saved the rest of the bouquet for Soseki's overly ostentatious tomb. He and his family are buried here. 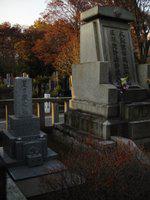 The last grave, that of Lafcadio Hearn's, I was able to visit, but the picture didn't come out. His grave shows his Japanese name, Koizumi Yakumo, and I was a little worried I hadn't found the right grave, but I checked later and was relieved to find out it was correct. 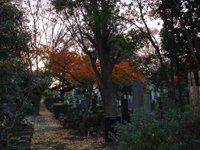 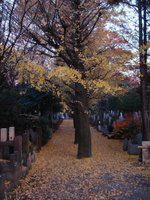 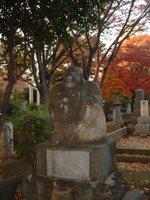 It was a good day, a sort of closing ceremony for my trip. I was able to revisit my old home, a place I feel will stay with me for some time, and visit the final stops of three of the most important dead people in my literary life: Hearn, who was so important in the early literary contact between the West and Japan and who single-handedly made it possible for a young Jesse to discover the ghostly world of old Japan - the man who symbolizes, for me, the unattainable goal of integrating into Japanese culture; Natsume Souseki, the author whose "Ten Nights of Dreams" initiated me into the Meiji era fantasy that has sustained me, and will continue to sustain me, for some time; and Izumi Kyoka, the shadow, the mystic voice of the Meiji era.

I ended the day by going to Kinokuniya (the bookstore), the place I've visited the most on this trip, to pick up a book detailing the Tokaido, a path from Edo (old Tokyo, remember) to Kyoto, through Hiroshige's block prints. This I bought as a supplement to another book, Shank's Mare, which follows two scoundrel travelers on the Tokaido. I got a manga of that to read through quickly before I read the real story written in Edo-period Japanese. By the way, quickly, in this case, means a couple of pages a day as opposed to a page a week (as in the case of Kyoka).

This trip in general, and the visit to Oji and Zoshigaya in particular, have really clarified something for me: Japan, unlike so many other interests, is not a passing phase. I may go back to the US, I may even stay there for some time to come, but Japan will always be there. From literature to toilet-shaped toys, Japan's special gifts to the world will fascinate me for some time to come.