Big winter issue ... tomorrow, because I'm too tired to finish it tonight. For now I'll just put up some random photos from the last few days.

I went to the subway museum the other day. It had some interesting displays on how they dig the tunnels and a little about the history of the subway (11 out of 12 of the subways were built after '45!). Other than that, it was kind of lame and not worth the trip to Chiba. However, it does have a fairly cool display of a few of the lines, with their relative depths adhered to. Unfortunately, my picture is rather dark, but you can see the little models of the people waiting for the trains. 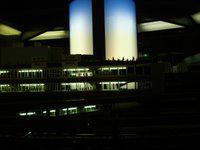 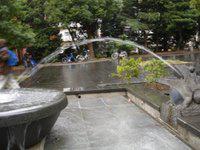 A frog from Ueno. Is he throwing up or is that his tongue? 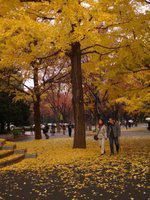 Also from Ueno. The young lovers ruin the picture. 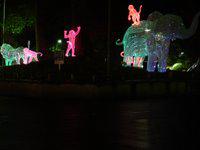 Again, Ueno. When I first saw this display, it was during the day, and I thought it was modern art. Now I see it is more just sensational art or whatever. Cool, though. 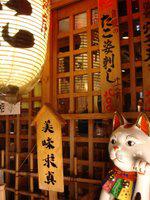 A restaurant in Akihabara, with a maneki neko (the waving cat you see a lot in San Francisco, even at the Chinese and Korean restaurants). He is waving you in from danger and the rain and into good fortune, as he did a monk a long time ago (according to myth). 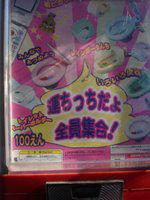 I just noticed today what this gumball machine near my dormitory holds: toilets! Cool, collect them all (as it says on the sign)! I got a toilet paper roll and a Western style toilet before I realized I'd just spent 2 bucks. I really want the Japanese style toilet (with attached turd), so I may try again tomorrow.

Last, pictures from nearby Ryogoku. Land of sumo. I've seen a lot of sumo lately, but not just in Ryogoku. Sorry, no pictures of real sumo. 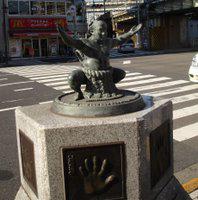 This is one of a set of monuments to the yokozuna, or grand champion of sumo. Asa Shoryu, a Mongolian who currently holds the title, will have his handprint on the far right side of this particular pedestal when he eventually loses his title or retires.

Finally, a temple in Ryogoku. Well, the surrounding garden. 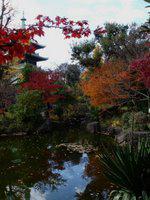 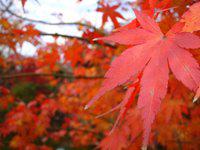