Trying to Catch Up

It's tough keeping up to date on a weblog! I've had so much other fun stuff to do, I haven't sat down and kept up with what is going on. Hopefully I'll be able to do that now.

After I left the Tetons, I spent the rest of the day driving through mostly boring Wyoming. The drive from Grand Teton to Rock Springs is nice, but after that it looks like western Kansas except with sage and horses and cows rather than grass and just cows.

I had a campsite selected for that night, but I took a wrong turn and ended up way off track, so I planned to find a hotel in Laramie. But Laramie (a podunk, crappy town if I ever saw one) was full of expensive hotels - they were having some kind of Western festival - so I decided to head on to Cheyenne. By this time it was getting dark, so I wasn't sure what I'd do. Luckily, though, I found a great campsite about 30 miles west of Cheyenne (can't remember the name, now).

This was a really lucky find. It was really spectacular scenery, with some of the most private campsites I've seen on this trip, and all for 10 bucks, the cheapest site yet. I met a neighbor who was camping out with his wife until they could move into their new house in Fort Collins, Colorado. They were an interesting couple, to say the least, and they had quite a set up up there in the hills west of Cheyenne. 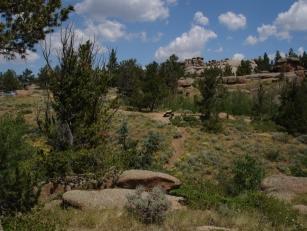 On their recommendation, I took a hike around the area and climbed one of the rock outcroppings like that in the picture above. It was such a different outcome than I had expected.

I then went on to Colorado Springs, and I am now staying at my cousin Cindy's place there. We took a hike in the hills near her house, and I'll try to have those pictures tomorrow.

Tomorrow I'm off to Kansas (egads), where I'll stay a night near Monument Rocks, then Thursday I'll be in Wichita. Over so soon?

By the way, in an interesting reversal of fortune, a Japanese friend who was supposed to accompany me on this trip but had to back out is now a day ahead of me, in Topeka. She resolved the problem that was keeping her from leaving while I was still sick in Daly City, and she ended up renting a car for a drive across the US. We were even in Yellowstone at the same time without knowing it. So if you are in Lawrence tomorrow and see a Japanese woman in her mid to late twenties driving through town, say hi (she speaks English very well).