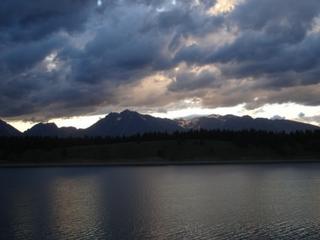 Some of the Tetons

Looking back at these photos, I realize they can never come close to realizing the awe-inspiring sensation of actually being in these two parks. There is nothing like it. I have been to several beautiful places in the world, but there really is no comparison to be made between Yellowstone/Grand Tetons and anything else I have ever seen. I hope you will, if you haven't yet, go there some day. That said, here is the regular blog entry...

My last full day in Yellowstone/Grand Teton. It's hard to believe. I can't imagine being anywhere else in the world - Kansas especially will look flat and unremarkable.

This place is magic, like nothing else I've ever seen. Unlike Yosemite, the crowds don't completely destroy that magic. Without much effort, you can lose the crowds, and even when you do follow some trail to a waterfall or meadow, you don't feel like one of the herd. While of course it would be better if there were no roads at all, at least the size of the park allows for those roads to not completely overwhelm the park, like they do Yosemite. 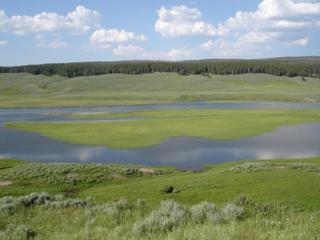 Yeah, so there is a tiny bison in this picture...who cares! Look at that scenery!

It's in the car that you join the ranks of other visitors to the park, and I admit I spent way too much time myself in the car. Both parks are so big that unless you have a specific destination in mind, you have to go by car. Next time I really want to do some backcountry hiking, but for an overview, I am glad I had my car. Very hypocritical, yes, but I admit it.

I caught myself several times thinking "This is too good to be real." There are so many unbelievably majestic areas all crammed into to two national parks, it just doesn't seem believable that we can get so much of a good thing. It really is a treasure.

The second day I was in Yellowstone, I did the touristy thing (can't be helped), and the third I went on a couple of hikes. Near the camp I stayed in, Indian Creek (a picture is in the previous log), was a place called Sheepeater's Cliff (I think). Apparently the local Native Americans were found of eating bighorn sheep, and somehow this cliff was associated with them... 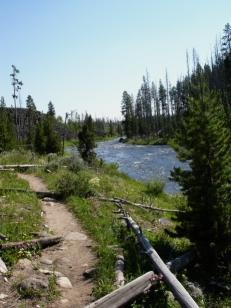 It was a nice little warm-up hike, about 45 minutes there and back, but the hike I was looking forward to lay ahead.

I had decided on a back-country hike, one that in the guidebooks was described as a way to get away from the crowds - good and bad, as getting away from crowds means solitude, but it also means animals are more skittish and likely to attack. Still, solitude piqued my curiosity, so I decided to risk bodily harm (I'm exaggerating for effect, I wasn't really that worried).

I include some photos from this hike below. At one point, I did run into a group of pronghorns, and I actually was a little scared. They were skittish, and I was a little worried that the few male pronghorns might attack me to defend the herd, composed primarily of young and females. I didn't want to turn back, so I waited, slowly edging towards them, and they finally went further up the hill, though they did complain verbally. 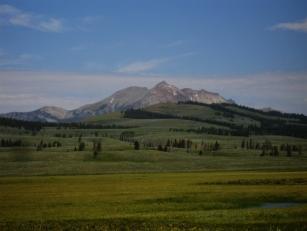 The beginning of the hike 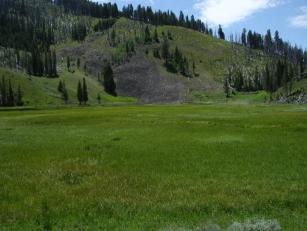 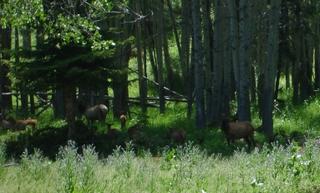 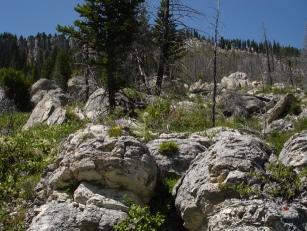 The next day I did a bit more touristy junk, then headed down to the Tetons. I wanted to get a campsite as soon as possible, so I landed in Lizard Creek which, like Indian Creek, is a very nice campsite but remains empty even on the weekend. It has a beautiful meadow just behind the campsites, and that is where I ate my dinner that night. 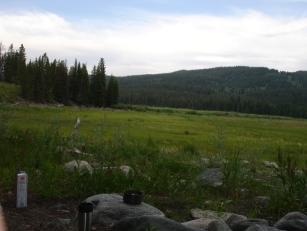 My backyard at Lizard Creek

After I found my campsite, I drove around a little bit to check out this new park, then listened to a ranger's class about mountain lions (apparently there are mountain lions in the Tetons and Yellowstone, though they are never mentioned in guidebooks). 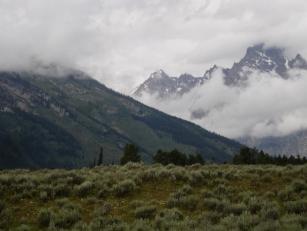 The Tetons looking all mysterious

The next day it was rainy and I was grumpy. I wanted to move my campsite because Lizard Creek was just too far away, so I tried to get into South Jenny Lake, but that was filled within hours of check-out time, so I settled for Signal Mountain. Honestly, I wasn't that impressed with this one, though it had access to a very nice beach, where I took the picture that starts this article.

I trekked around Jenny lake, then, exhausted about half way (for some reason I had no energy that day), I took the conveniently located boat back to the parking lot.

I left the next day, regretting somewhat that I was leaving such a special place, but ready to move on to a new area.