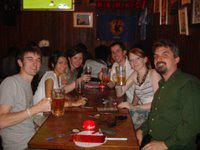 To celebrate the vacation that began last Friday, my friends from training and I got together at an Australian bar in Shinjuku last Saturday. Officially it was the planning party for a trip to Mt. Fuji, but it ended up being an all-night bash.

As some may remember, I mentioned last year that the trains in Tokyo shut down relatively early—this results in a mad dash for the last train (or trains) at around 11:30 to midnight. For people like me who live on the other side of town, it usually means the earlier the better.

Very often, though, people don't make it home—purposefully or no. We all decided to stick it out and run around until the first train, around 5:30.

Some fall asleep on benches, others hang out in bars; we did karaoke. Amazingly, for ￥3500 apiece (about $30), we could drink as much as we wanted until 5 am. We had a great time, I scared everybody with my off-key enka, and somehow we managed to pay on time (I don't remember a 2-3 hour space). It wasn't at all as difficult as I first thought. I wouldn't want to get in the habit, but it makes the prospect of missing that last train less scary. 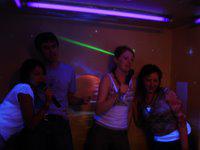 And instead of a cramped train ride, I got to ride on the first Hibiya line train of the day. You'll never see it even close to this empty at regular times. In fact, the Hibiya is one of trains that gets so crowded that women have their own cars during peak hours so that they can avoid men...ruining their day. 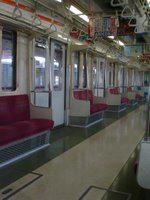 The next day, I slept until 3, which I hated. I spent the day relaxing, then today I went for a bike ride. 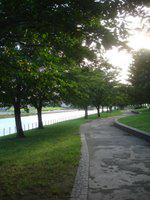 This time I rode up fairly far into Saitama, the prefecture to the north of Tokyo prefecture. It was odd, because I suddenly felt I was in the country. It was pleasant.

Then I looked to my left and almost fell off my bike:

I had no idea you could see Mt. Fuji so clearly from here. I'd seen pictures, but I thought they had used a telephoto effect or something. My picture doesn't really tell you how monstrously big the mountain looks; it stands out like a watchtower. I kept looking over my shoulder to make sure it wasn't getting closer, trying to jump me.