Last week I tried something I've never done before—backpacking. I've camped a bunch of times, yes, but I've never hiked to the site and then set up. Alright, so taking a train to a place, hiking to the site, and then setting up isn't quite the same, but I have to get there somehow.

My plan was to camp in an area west of Tokyo called Okutama—Tama is the name of a river and a region in the area, and oku means "deep", thus it is the deep reaches of the Tama area. In particular, I planned to hike Mitake, a celebrated and fairly accessible mountain, then head to Otake, a larger mountain further south, on my way to the campsite.

I have had a great deal of difficulty sleeping recently, and the night before my trip I didn't get to sleep until about four or five in the morning, so I didn't get up until 11, and didn't actually get started until much later. I think I reached Mitake at 2 in the afternoon. 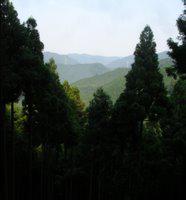 It is a beautiful place. I was surprised: my experience of Japan to this point has been entirely of cities and farms; I wasn't sure there actually were uninhabited places. Even uninhabited places, I was worried, would have huge, straight staircases carved into them, like Tai-yan in China.

But this had beautifully simple trails the envy of any on Mt. Tamalpais in California (there is an area near the mountaintop shrine that is paved, though). The path I took was strenuous, and I was sweating like crazy (though, in my defense, I was carrying an extra 30-40 pounds on my back), but it was beautiful.

After a while I noticed I was way behind the hour and five minutes my guidebook claimed the first stretch should take; I hadn't reached the first guidepost mountain and it had been two and a half hours. I still think they are crazy; you'd have to run to get up the mountain that quickly.

I arrived at the peak about an hour later (yes, something that "should" have taken an hour took three). I found a sign at the Mitake shrine that gave more reasonable estimates for the time it should take; the point I was at before, it said, should take two and a half hours. And according to that map, my campsite was still three and half hours away or so. I was looking at a walk in the dark for two hours of that, and I had no idea if I would be able to camp when I got there.

At first I considered staying on Mitake after that and, when people woke me up roughly the next morning, I'd just explain I had no idea you couldn't camp in an undesignated area in a national forest in Japan. There was a wonderful area opening onto what must, under the early-morning sun, be spectacular. It was completely unmanned and with a little covered area where I could have slept even without a tent. But I just couldn't make myself do it. It probably was a good choice, but I wish I had a bit more fortitude.

I made a bad choice after that, to try to get to a different site nearer a train station (if the other campsite I mentioned was full I would have been screwed because there was no train or bus nearby). This involved me going down a path in the dark, by myself, with nothing but my bike light. I was afraid to use the bike light on full-time beam because I was worried the batteries might die and then I'd really be screwed, so I put it on flash instead. This saves battery by flashing on and off, but it can be disorienting. In the pitch dark, worried that there might be some wild animal ready to attack, the effect of that flashing light was like being in a horror movie. Every time a leaf hung over into the path of the flash, the shadow it cast looked like a small, black animal heading towards me--an animal unafraid of me and thus dangerous. After about a half hour of trying to use my keys as a bell to scare off any predator that might attack me if surprised along the path in the dark, I hit upon the idea of using my cell phone speaker to play some music that might scare them off. The only mp3's I had on it at the time were a voice recording of In Cold Blood, by Truman Capote, something I didn't think would interest scary forest animals very much, so I tried the various ring tones on the cell phone instead. The first ring-tone sounded like the soundtrack to a horror movie, so I quickly changed it. The next song was a bit more soothing; I walked along and, after a while, I calmed a bit and became absorbed in getting back to the station—of course by this time I'd given up camping and just wanted to go home. It was difficult judging my path (remember, I'm going down a mountain) with the small, flashing light, and I fell down at least four times, nearly sprained my ankle, and ripped a hole in the knee of my pants, where I still have a nice purple bruise. I promised several times on the trail not to take nature so lightly.

I managed to make it for the last possible train that would get me through to home that night. In that way I was lucky. Exhausted, my legs barely carrying me at that point, I got home around 1 am.