Steve picked me up at about 7:30 and we began the long ride to the border. Steve told me if he had checked his email earlier I might have gotten a plane ride with his pilot friend straight to Wichita! But I enjoyed the ride and got to see some things I might not otherwise.

Steve is a rancher back home in Oregon, but he spends four months each year traveling Baja handing out school and medical supplies in the most remote areas. This requires a pretty burly 4×4, and we needed it on this trip. 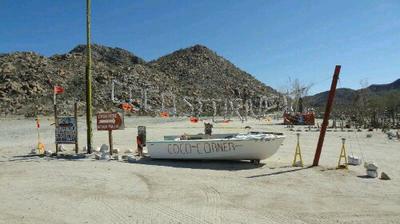 Half way through the rough section of our road, we stopped at Coco's Corner. Coco was a business man in Ensenada, but he had a problem with alcohol. It got bad enough that he decided the only way he'd beat it was to move out in the middle of the desert.

I guess he did beat it, and he's become a local legend. He sells sodas, and now, beer, to those passing through, and his land, lit up at night, is a convenient market for passing airline pilots, so his place appears on some maps. 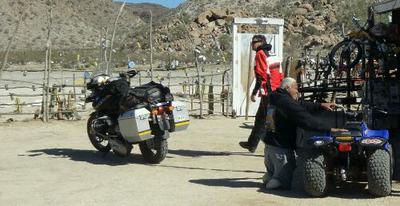 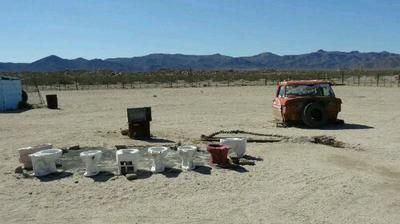 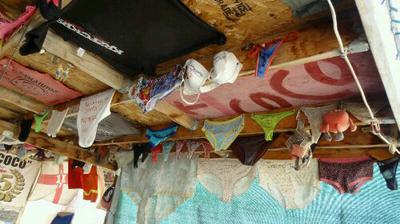 He developed diabetes, and has lost both his legs to it. Steve helped him get prostheses, but there have been problems with those. Despite all this, though, Coco is an upbeat guy with a good sense of humor. He speaks excellent English, and we hoped for a while, bought a beer, and moved on.

That night we stayed in Gonzaga bay, and then hurried on the next morning. We were soon back on pavement, then in San Felipe. San Felipe was a resort for vacationers from LA, but the recession has hit it pretty hard and a lot of motels sit unfinished.

Next was Mexicali and the border. Mexicali was the biggest Mexican town I went through, and it took quite a while to get to the border crossing. This was remarkably easy, and then we were back on US soil!

The trip to Riverside was mostly uneventful. He was running a bit behind schedule, so Steve dropped me off at an exit real on the side of the interstate. I loaded my bags back on the bike and headed to a campground.

The campground was supposed to close at sundown, but I figured I could get in and pay the next morning. Not so. A huge gate blocked the park off, one I couldn't get around. A car showed up soon after I got there, and the door opened: I thought I was saved. Not so. As I was looking at the fee schedule, the car reversed to me and an unnecessary hostile troll asked me why I had followed him. I thought it was clear, but I told him I was hoping to stay there. He and his troll wife told me to get out, and the troll husband said he should call the sheriff but wouldn't. Welcome to California, traveler!

So it was a motel, then. I wandered around looking for a Wi-Fi spot, in shock at the man's lack of a heart. I found Wi-Fi, got on the internet, and found a motel. When I came back out, my solar panel was gone. I still don't know if it fell off somewhere, was stolen, or was lost somewhere when I was passing my stuff on the interstate. I did go look for it, but never found it.

After this wonderful display of the hospitality in southern California, I decided to get the hell out of town (actually, there were other factors, that was a minor reason, at least once I'd cooled down a bit). So the next day I left Riverside early and made my way to the Fullerton Amtrak station. 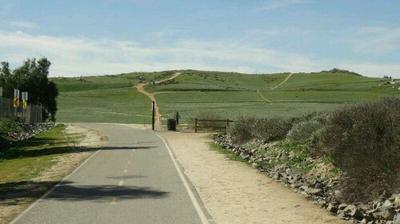 I used the Santa Ana River Trail most of the way, and found it a really beautiful way to get around. 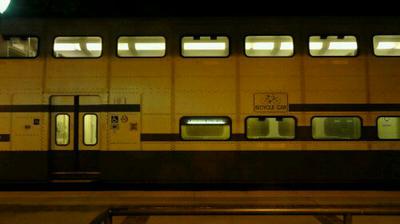 At last I arrived in Fullerton and got my ticket to Kansas City. They are extremely generous with luggage allowance, and it is very easy to get a bicycle on the train. You just have to pay $15 extra; they provide a box for $10 more. But you can only check two bags for free, and the bike counts as one bag. But I had 6 bags! I rushed over to a thrift store I'd seen on the way and found a (barely) suitable suitcase. I stuffed it to the gills, then took two heavy panniers on as carry ons. 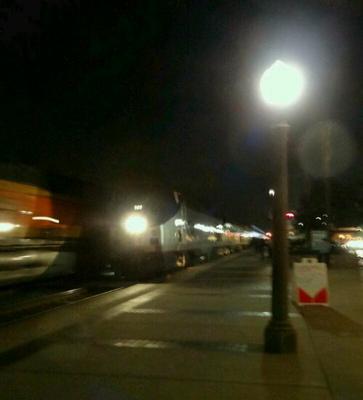 My neighbor had a jail tattoo, with a single tear. That freaked me out a bit, but he was a nice enough guy. He had, in fact, just gotten out of jail that very day after 8 years. That freaked me out, too, but it wasn't a problem. He said I was punk rock for riding across the US. It was touching to see him greeted by a hug when he got off the train.

And that's about it. 34 hours later I arrived in Kansas City, then got a ride back to Lawrence from my aunt Luanne and uncle Neil.

It feels good to be back, really for the first time since I left for Athens, Georgia, about 15 years ago. I don't know if I'll stay here—have to go where the work is—but I'm just happy to rest a bit and see some familiar faces. I'm sure I'll try again to get to Argentina, but next time I'll be better prepared thanks to this trial run.

Thanks again to my generous hosts and people I met along the way. Come visit once I get settled so I can have a chance to repay your kindness!