Lots of tent flapping: I woke up about two to wind blowing through the nearby boulders and my tent threatening to split at the seams, and I didn't get back to sleep.

The wind persisted throughout the day, gusting to the highest speeds I've had so far.

I recommend not staying in the first campsite at White Tank if you are on a bike, seems to carry some bad luck. That's not where I stayed, but where the Argentina lady did last night. The next night another cyclist stayed in the same site, and he also had some trouble.

I noticed him the second night of my stay: a lone camper without a vehicle. I couldn't see a bike and couldn't imagine he hiked in, so I thought maybe he was just waiting for friends to return in a car. They never showed up.

The next morning I saw he did indeed have a bike, so of course I was eager to meet him. I waited around, both because I hoped the wind would calm before I took my tent down and because I was waiting for the other cyclist to show. But time wore on and I wanted to get on the road, if only to have something to do other than listen to the wind. I got near the exit of the campground, checked my tires, then decided to use the bathroom one more time.

When I came out I saw said cyclist packing up at last. He was a young guy named Dana, a student in Palm Springs (not sure what university). He had ridden his bike from Palm Springs to the park to do some climbing. He said he wasn't much of a cyclist, but thought it an adventurous way to make it up to the park. Can't argue with that.

He was studying computer science but thinking of switching to philosophy. I laughed at that and he thought I was laughing at his choice, but it was really because I started in philosophy and switched later to comp sci. So anyway we had that in common.

After a couple of peanut butter tortilla sandwiches we decided to head out together; I was taking the route to the city of Joshua Tree to see a bit more of the park and he was heading to Hidden Valley to do some bouldering, so we were headed in the same direction.

There was a bit of a problem, though, and not just the wind. Dana's rear hub was wobbling, to the point that it sometimes kicked the skewer out of the frame: end result, the wheel was falling off. He'd been dealing with it the whole time, but I guess he was able to find a sweet spot that had gotten him this far.

It wasn't really a problem on the uphill, because we had both a nasty headwind and some fair headwind to keep us from moving dangerously quickly. But we soon got to a short downhill, and would see many more, and even in the wind we would be flying.

After the short downhill we had a long uphill ahead of us: 1000 feet of elevation. Dana's wheel popped out. He tried to fix it. No luck. He tried again, then decided to see if he could hitchhike. It was Christmas Eve, so he worried a bit that nobody would be by, but he soon passed me in a truck. Good luck philosophizing, Dana! And get a new bike!

I toiled up the hill, pretty happy with my speed considering the conditions. I've definitely gotten some legs; nothing spectacular, but I'm on the road to spectacularity. 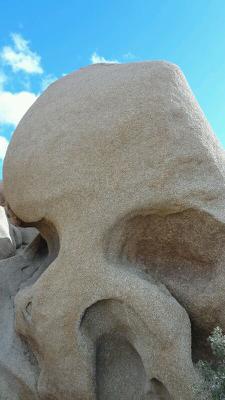 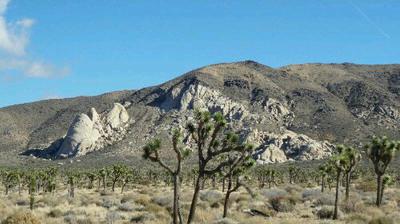 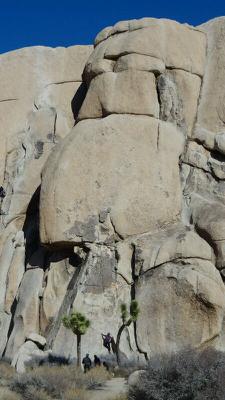 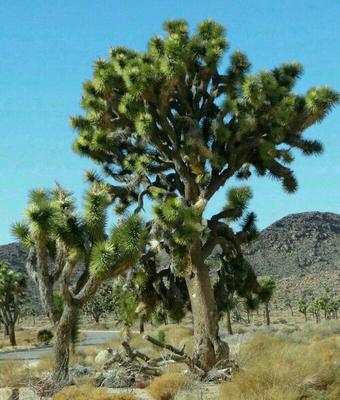 I passed Skull Rock, then began the long descent at Sheep Pass. I saw climbers at Hidden Valley, but no Dana. I passed Mt. Ryan with its impressive profile, then I was on my way to Joshua Tree.

Joshua Tree has a lot of bohemian flavor, I assume because of the U2 connection. I had a mediocre quesadilla at a cafe there, then rolled on to Twenty Nine Palms.

The training part of this trip is now over. After 2000 miles I've reached my first destination, where I'll be taking a rest before heading on to Mexico and further south.

I'll be taking a meditation retreat here for ten days. No internet, no tv, no bicycle, no talking. And no blogging. Just meditation, from four am for ten hours a day. So I'm gorging on Chinese food and watching as much idiotic tv as I can tonight.

Have a happy New Year, and look for the story to continue here the second week of January!