12/2: The old forest—Santa Fe to Corrales 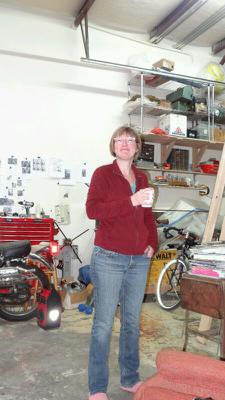 Christy, bright and shiny early on my last day in Santa Fe

I warned Christy the night before she had to paint something on my bike. She slept on it, I guess, and had an idea first thing: a ward to protect against lightning. She said it was a consistent fear for her on the trail, and I certainly can use the protection myself.

I had two options: ride the interstate or take my chances with back roads. I've been traveling on highways a lot so I felt ready to take the challenge of some country roads. I had no idea what I was getting myself into.

I packed up, said goodbye to Christy, then nearly fell over as I reaccustomed myself to my bike's loaded feel.

I headed south for miles and I was riding along fine, then I saw a crazy woman trying to hand something to me from the side of the road as if it were a race and she were at a SAG point. It was Christy: a battery had popped out of my stupid headlamp and had been sitting on her couch. She chased me down in her truck with it. I grabbed it and thanked her. 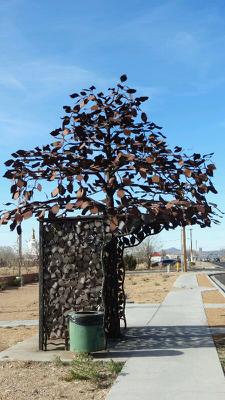 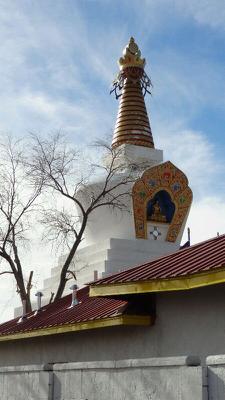 Nearly out of town, I saw a stupa (Buddhist building). It was a Tibetan temple; I looked around but didn't go inside. 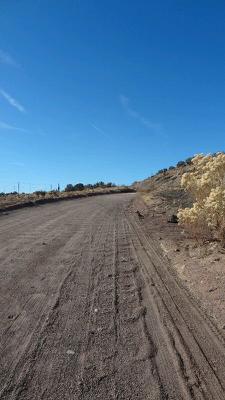 After a while I found the dirt road I'd decided to "challenge" myself with. It was BLM land, I guess used mostly for shooting practice. The view was fair, but the roads were dirt with deep ruts. I admit it felt good to get away from the city and the cars on the highway, so I was mostly pleased with my route. 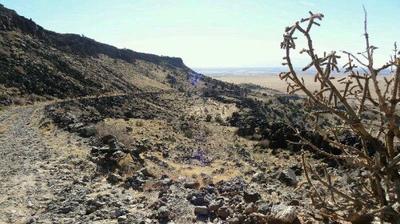 Until it turned to crap. Probably an hour in, the road began to descend. Instead of gravel, the road was now covered with lava stones. Most were around half a foot in diameter and there was no way to avoid them. I was miles from any more sensible road. So this meant I had to push the bike down a series of switchbacks, clambering over these stupid stones, to get down to the bottom of the Bajada mesa. It took me an hour to go a mile or two. 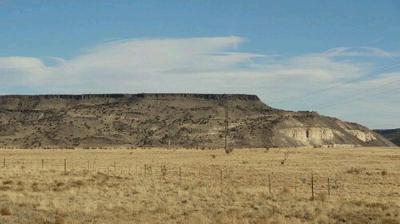 Near the bottom I met a native of a pueblo in the area who taught at the university. He went to school at Haskell! Small world. He gave me advice about the route from there. I decided to follow this advice and keep on the county roads, though my frustration was reaching new heights.

After a while the road was paved again and I was able to make some progress. I zoomed through several pueblos and a Hispanic community, then once again I was on dirt. This was particularly bad, with deep drifts that forced me to get off the bike and push again. I nearly fell a few times as I was pushing, and I'm afraid I cursed pretty much everyone I'd ever met and every thing I could see.

I was listening to an audio recording of the Lord of the Rings at the time: Frodo and friends were making their way through the Old Forest. I felt like when they made headway, I found it easier to move along; when they were being coerced towards the Withywindle against their better judgment, the obstacles in my own way seemed to be leading me where they wanted. But I had no Merry Brandybuck to guide me through the forest, and certainly no Tom Bombadil to come to my rescue (not that I needed rescuing).

But I made it. Even when I'm angry at the world these days, I know (mostly) that I'm going to make it, and so I'm better able to keep the frustration down. The route into Albuquerque was mostly pleasant after that, until I got to the northern suburbs.

I called Bob, my cousin, and told him I'd be late (the sun had gone down and I had at least an hour to go). As I was talking to him, I took out my headlamp and somehow lost the battery Christy had gone to such trouble to get to me! I looked for about 20 minutes in the grass near the side of the road, but never did find it. Fate is weird.

I plugged in another battery and made it to Bob's house. He lives in an interesting part of town, north of Albuquerque proper, called Corrales. Though the residences in the area are on dirt roads and it feels very much like one is in the country, it is just a few minutes to nearby strip malls with big box stores. 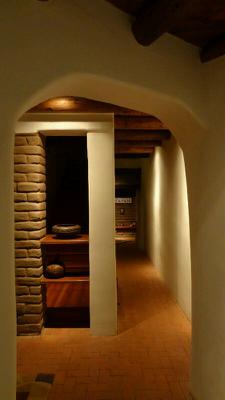 A corner of Bob's and Helene's house

Bob was very welcoming and he took me to El Pinto, a fancy New Mexican restaurant that makes the salsa sold throughout the US. I had a combo plate of very hot enchiladas. Bob told me about his trip, canoeing from Colorado to St. Louis, that he took when I was only four years old. His trip sounded a lot more rugged than mine, but also very enticing. Never been much of a boater, but...