I bounced around the coast for a few days because of the stupid hike and bike rules: San Elijos one night, up to South Carlsbad one night, then back to San Elijos. Ever since I've been in California, camping has been like going to the DMV: everything is by the book, no consideration of extenuating circumstances whatsoever. The campsites were more than half empty, but they couldn't let me stay on the same site for a few days because of the principles involved. I'm grateful that there is a hike and bike program at some of the state parks, but it doesn't make up for the exorbitant fees charged even in winter.

I really didn't want to leave the seaside, but I did want to get up to the Palomar Observatory on my way to my cousin Cindy's. Besides, I didn't want to pay anymore ridiculous fees (ok, I'm done now, really).

I was climbing the steepest hill since Oklahoma when I met a fellow biker traveling the same way. He came back a bit later and asked which way I was going. I told him Palomar and he said I wouldn't be able to get through the way I was going. I'd seen a "no outlet" sign when started up the hill, but I was going against hope I was misinterpreting it, because the other route added six or seven miles. But this guy convinced me I should figure something else out.

I was also beginning to realize I was in for the longest climb yet at the end of the day. So Palomar was out.

This made me angry. I feel like I've missed out on a lot so far on this trip because I wasn't willing to go the extra mile. To be honest, I've been traveling without much enthusiasm since I left the retreat, and giving up on Palomar felt like giving up the whole purpose of this trip—to see outstanding places that move me.

My anger and frustration moved me to make it up the mountains no matter how difficult. So I went the correct route, and I climbed up the mountain late into the night. 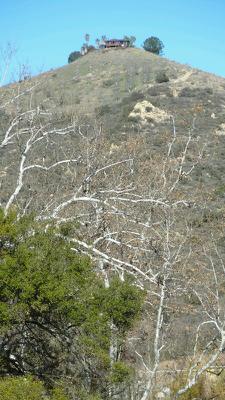 I think the sun was setting when I started the ascent. I could have ridden up the mountain, it wasn't any steeper than the mountains between Palm Desert and Anza, but I knew I had hours ahead of me and I was even considering going all night to avoid another expensive campsite, so I decided to save my energy and just push the bike up.

After a while my anger had calmed a little and I began to wonder if I'd made the wrong decision. But the road was relatively quiet, and the moon and stars were beautiful. Though I've camped a lot, I haven't taken enough time to look at the stars. Even if I didn't make it to the observatory, this chance to slowly make my way up the mountain in the starlight was maybe worth it in itself.

It was slow going. I listened to a lecture to pass the time. It was about the Buddhist perspective on age and dying. Usually the lectures are very encouraging, but I felt older after the lecture than before. I thought a lot about my life so far, and the people that have and haven't been in it.

The winds picked up. This was reminding me a lot of the passage to Anza, and I wasn't enjoying it. The gusts weren't as bad, but now I got to enjoy dust and sand blowing in my eyes as well.

It would be at least another hour before I got to the state park, and I'd have to travel the miles back to the fork and up to the observatory the following morning. Plus I'd have to pay... well, you know. Meh. Or I could climb to the observatory and just wait until it opened at 9 the next morning. Meh. Thankfully I decided not to go to Julian—there was a bit of a downhill, then a long uphill before I got there later, and I didn't see any places to stay along the way. Meh. I chose none of the above.

Just before the fork I found the perfect stealth spot for the night. There was a ditch not too far below the road and a nice, level platform of land just above that hidden from the road by the bole of a tree that also hung over and sheltered me from the wind. There wasn't enough room for the tent, but it was a clear night so I just rolled up in my sleeping bag (which has really proven itself).

I was very happy there, protected by the trees and lying almost directly on the earth. The highway was nearby but traffic had pretty much died off by then, so it was more peaceful than most of the campsites where I have stayed.

I don't think I ever slept, but my alarm went off at 4:30. I made my way toward the observatory. 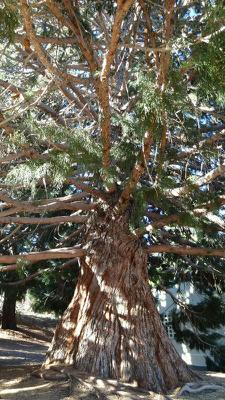 It was a steep climb and it took me a couple of hours. Again, I was in no hurry so I just walked up. It was a bit icy, and the two (closed) National Forest campgrounds had some snow.

I reached the observatory entrance early and had breakfast. I tried to follow a trail to the observatory, but it didn't seem to go anywhere, so I just waited for them to open the gates. 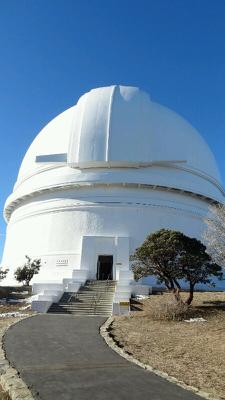 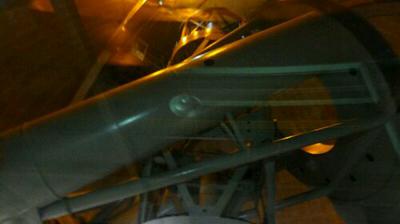 The 200 in telescope was impressive. There were some beautiful pictures of stars: the pictures were so full of stars you could hardly see space between them. The displays explaining the main telescope and several other telescopes on the observatory grounds were very in interesting: several of the telescopes just scan the sites without human intervention, then alert the main telescope if they see anything of interest, like a supernova, gamma ray burst, or extrasolar planet. I again wished I could sit with an astronomer at the telescope controls and discuss the findings of the observatory. 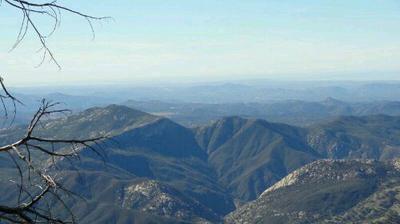 From there I headed to Julian. I had no idea what the elevations were between Palomar and Julian, as I said before, and thought I would be able stop off early in the day and do some 'netting. But no such luck: after a short descent, the (less steep) climb began again. The observatory was at 5500 feet, but Julian was at 4000. 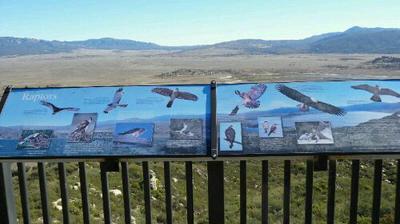 The nice thing is this meant Cuyamaca Park, where I planned to stay the night, was not much higher, at 5000 feet, so I didn't have the late-day climb I'd had the day before. But the fun wasn't over yet.

I reached the first Cuyamaca campground at 5, but there was no one manning the entrance and no mention of hike and bike. I really wanted to just set up my tent, but thought I'd find the bike and bike site promised by the state. Besides, it was all downhill to the next campground...

And it was closed. For repairs I guess. Great. Now I had to go back up the hill 1000 ft in four miles. Nope. I found another lovely spot, curled up in my sleeping bag, and passed the night.

From there it took me about an hour to get to Alpine, where my cousin Cindy lives. While waiting for her to get off work, I met a guy riding the southern tier on a recumbent bike. He's done several tours of the US. He told me about traffic in Mexico, and suddenly I realized I had left my swim noodle somewhere. Grrr. Not that it'll cost me much to replace, I'm just so tired of forgetting things along the way.

Cindy's promised a night out at the local brewery and a fun weekend, and I'm very excited about that.