Jimbocho, Ueno, and the Last Samurai

Just so you know, Jimbocho, the book district, has nothing to do with The Last Samurai, but I like the district, so I took a picture and thought I should include it. 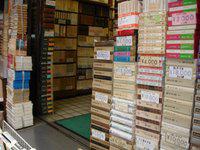 On the far right are the complete works of Izumi Kyoka. For only 18,000 Yen!

The next couple of photos do have something to do with the movie. 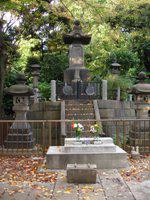 I went to Ueno Park, in northeastern Tokyo, yesterday. Ueno is a symbol of the amibivalence of Japan concerning its modernization and westernization. Under the new Meiji imperial administration in Tokyo, Ueno became the first public park in Japan and it is synonymous with the defeat, in 1868, of the final stand in Tokyo against the restoration of the Emperor to power. And yet, the statue in the picture above, located in Ueno, commemorates these loyalists to the Shogun. 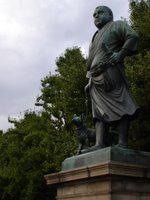 Even more evocative of the lingering misgivings about the destruction of the samurai class and headlong pursuit of Western industry and military strategy is the nearby statue of Saigo Takamori, the figure upon which The Last Samurai is loosely based.

Takamori was, at first, a supporter of the Meiji Restoration, but with the threat of the destruction of the samurai class, Takamori turned against Meiji and was involved in the Satsuma rebellion, depicted in very exaggerated terms in The Last Samurai. He, like the Ken Watanabe character, knew he was overwhelmingly outgunned, but the rebellion, as we see in the movie, made its point. He committed suicide soon after the rebellion failed.

In this society that celebrates the ritual suicide of 47 samurai who avenged their lord and then killed themselves despite a reprieve, the samurai-class opposition to the new emperor romantically embodies the dignified past in Japan. For those tiring of the coorporate cultural here that separates men from their families and is slowly destroying the natural and cultural history of Japan, they represent an escape, an answer sometimes. Most of my male friends worship these figures of what is called the Bakumatsu period or the end of the shogunate. I don't think any of them particularly care for the shogunate; it is the character of these men who fought against the emperor newly restored to power that they are interested in. It is a dignity that the generation before them don't seem to have, working in cubicles for profits rather than on the field of battle for their lord and the title of "samurai" itself.

It is, of course, far more complicated than this. But I have been struck by this interest in the past. I suppose it is like cowboys, but my interest in cowboys didn't last past 10, whereas many of my friends are in their mid-twenties. Ah, well, I'll leave it at that. Maybe some day when I know more I'll return to it.

Just a couple of more pictures that I forgot to add the other day.

The first is the picture of what looks like an apartment complex. I'm guessing it is a capsule hotel, where you can sleep in an 8 by 5 by 5 capsule for very cheap. Very Blade Runner, I thought. Or Terry Gilliam's Brazil.You probably pay extra for the windows - other capsule hotels don't have such luxuries because they are often a place to stay for businessmen on work-related trips. 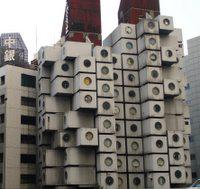 Last, faces on the sidewalk. 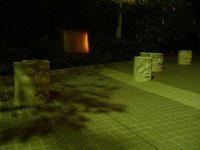