Finally heard back from ECC: nothing in Hiroshima, but they will put me on a list for later openings. Thus, no definites. I guess it gives me the chance to drop Geos, as I'm in the same situation for both companies (can't choose where I go) and I like ECC better overall. One highlight is that ECC has fewer schools, which might mean less chance of getting stuck in the boonies, as they are primarily in Osaka, Nagoya and Tokyo; still, no guarantees.

I guess that means some of the pressure is off. I would have left in March if I were to go to Hiroshima; now it could be several months. Probably for the best. Definitely better than I could ask after the crap this morning.

So, now that you've suffered through all my whinings, I'll reward you with some pictures. Toronto is no Kyoto, so don't expect much! 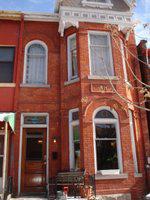 The hostel I'm currently in. It's in a nice neighborhood, Kensington Market, with a bunch of small... markets, as well as a Chinatown. The buildings throughout the district look a lot like the below: 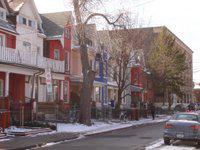 Proof that Toronto is just kind of weird: 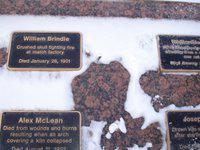 This is a wall of 100 violent deaths on the job. Something about it being a monument to those who have died to... whatever, it's weird.

A lot of you have probably heard of Engrish.com and sites like it that make fun of Japanese attempts at English that can be hilarious. While this may not be hilarious, it's good to see that it works the other way around - those of you who know Japanese will see in a second that this sign the CN Tower's Japanese is just wrong. 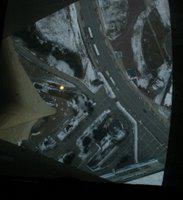 And here is the view from the floor of the tallest free-standing structure in the world, the CN tower. I couldn't take it - rationally I knew the floor had to be quite safe, and yet I could not get myself to stand on the glass. In fact, the usher on the elevator ride down told us that the entire floor is glass, but people couldn't handle it so they covered most of it with carpet!

Daiju, who was nice enough to get tickets for my birthday from his roommate who works at the Tower, had no problems standing on it. He even danced on it a little bit. 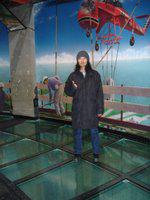