Today I went to the Edo Tokyo Museum. The above picture is from the entrance, where you can cross a replica of the Edo-period Nihonbashi. It is the same width as the original, and half the length. Nihonbashi, though now a concrete bridge with nowhere near the glory of the former bridge, is still the point from which milestones are measured.

Even though it is only about a half a mile away from where I'm now staying, today I visited the museum for the first time. It is a pretty amazing place.

Edo is one of my favorite periods - though the shogunate was extremely repressive, it is the period most people think of when they think of Japan - Kabuki, geisha, kimono, samurai all flourished during the period. In addition, Edo was the largest city in the world at the time and still managed a fairly sustainable culture.

In any case, the Edo museum covered nearly every era of Tokyo, from prehistory to the mid 60's (I couldn't find any displays much later than a Subaru made in the 60's).

The most interesting to me is the Edo period, Tokyo under the shoguns. During this period the city grew from a "backwater" (that's what all the historians call it when they talk about Edo in the period before the Tokugawa shoguns) to about a million people. The period during which the samurai went from limitless power then fell to the merchants. During which Basho traveled deep into the north. 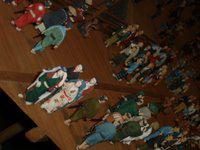 This is a model of Nihonbashi at the time. The models were perhaps the best part - they showed a huge area, with a large number of little figures respresenting a cross section of commoners' lives in Edo at the time. 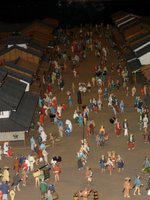 This is the same model, the street leading to Nihonbashi. You can see the amazing number of figures, each detailed and different from the others, lining the streets. 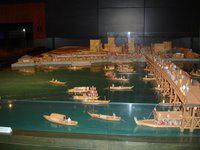 This is a model of the area near where I'm staying, where the museum is located. It is called Ryogoku, and is home to the National Sumo stadium. This is, I believe, from the other side of the Sumida River (not the side I am staying on). I wish there was that kind of boat traffic here today. 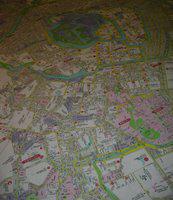 Here's a map of the city at the end of the Shogunate. It is a huge map on the floor; you can walk on it and find your favorite areas for comparison to today.

Last, these two are more to show the amount of detail and work that went into the museum. The first is, well, a boat (I didn't check what the significance was!). The next is a scene from a Kabuki play. 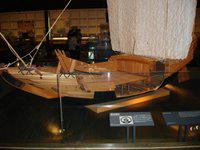 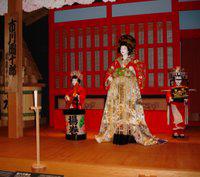 The museum is huge, with a number of areas you can't take pictures of. What interested me especially was the block print section, where they show the books designed with images and text to tell a story or portray some news item: these are the precursors of manga, the comic-books here in Japan.

There was also a huge section once Edo became Tokyo, the eastern capital. It was interesting as well, but it is a lot like displays on other countries from the Industrial Revolution to the present, except for one very large difference - WWII is from the axis side. There is very little talk of Japan's part in the war, perhaps because Tokyo isn't Japan. But there was a large display of the damage done to the city by Allied fire bombing. It was horrendous, and unconscionable. Far more damage was done in one raid on Tokyo than in Hiroshima. And most of the casualties were innocents. The Greatest War, huh? (I am not, by the way, condoning in any way the activities of the Japanese).