11/29: Rising above it all—Española to Santa Fe

Low on energy from a short night of sleep, I decided to stop at a coffee shop on the way out of Española that Adam had suggested. The owner recommended that I bring my bike up on the patio because "there are a lot of crackheads around here". 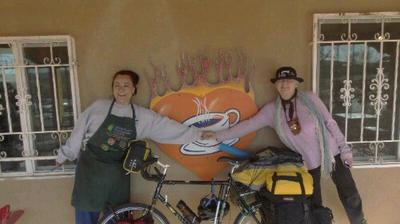 The owner's name was Kata, and she was very friendly and engaging. She showed me around a small gallery she had of local works, and wanted to know everything about my bike and my trip. Her coffee house and the neighboring church were oases in an otherwise dying town.

I decided to take the "High Road to Taos", or part of it, to get out of town. There's a church up there that has some extra dirt, they say, and they say that dirt heals people. So I headed up to the santuario de Chimayó, holder of the dirt. It was not a pleasant ride. Right up to just before the santuario, it was more shanties, dogs, and burrs. 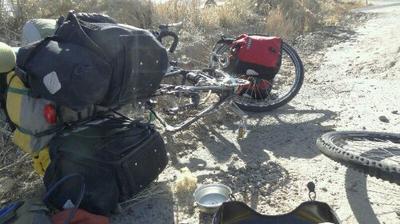 I had fixed the rear tire puncture I mentioned in the last entry before I left (it felt flat the night before, but I wasn't sure until the morning it was a full-blown puncture), but I soon felt the wobbling rear tire feel that I knew meant it was getting soft. I thought maybe it was a bad patch in the morning (I was impatient, stupid me), so I replaced the patch. Just as I was putting the tube back in the tire, though, I noticed another burr stuck in the tire. Grr! I put on a new patch inches away from the old one.

After this little mishap, things started going better. I did get a bit lost, thinking the santuario was on a side road, but I ended up finding it. The santuario was quite pretty in its simplicity. 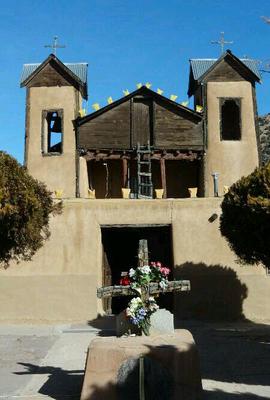 No pictures are allowed inside, but they had some very nice, simple carvings. I didn't find the miracle soil. From there I headed back to the main highway between Española and Santa Fe. The great thing about this road is it has a frontage road: rarely used, with a low speed limit! So bicyclists get the straight road to Santa Fe, but don't have to deal with the gnarly traffic! It was nice. 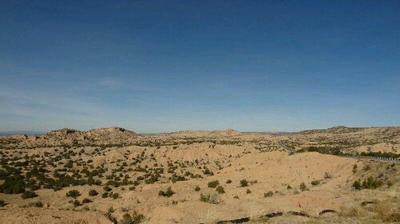 On the High Road to Taos 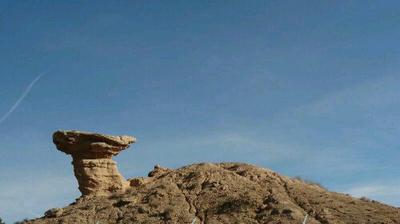 Just before Santa Fe, though, the frontage road goes away as the highway climbs a steep hill into the city. There's a nice sideroad that goes through Tesuque and then into Santa Fe, so I decided to try it. It was very steep in places, but there were a lot of really nice homes lining the road, and it leads directly into the city, so it was well worth the trouble. 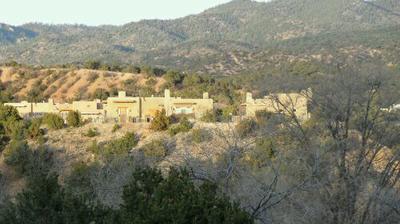 I had hoped to wander through SF a bit before heading to my host's house, but it was getting dark so I made my way, after some confusion, just south of town.

Christy is a crazy through-hiker/artist/sailor who has hiked the Pacific Crest trail and plans to do the Continental Divide trail next year, has worked all over the country on sculpture fellowships, and just came back from an artistic cruise of the arctic. Pretty fascinating.

I'm sticking around Santa Fe for a couple of days before heading to Albuquerque. Art shows tonight, maybe a hike tomorrow.