I don't know that I've ever gone through a day in Tokyo here in this blog. Sometimes I wake up and think, "maybe I'll head over to Ueno," or "it'd be great to do some people-watching in Omotesando". Then I remember I'm 5000 miles away. I'm kind of curious, thinking now from a lounge chair here in Kansas, if I can recreate for myself the environments of Tokyo again.

I had a nice list when I left Japan of the things I loved, that I would miss about the country. Those paying attention may remember I quit at 18; not because I suddenly lost interest in Japan, I'd like to assure you. I still love the place. But I suppose I needed as much time to acclimate in the culture I've known most of my life as I did to discover a new one. Not because I feel American culture is so strange or different, but while I remember the pathways of the old culture, the habit, the muscle memory, is distant. It's taken some concentration and retraining to find some balance, and I guess I haven't had much time for reminiscing about Japan except in odd moments of bittersweet longing.

But I've reacclimated, for the most part, and have accepted that it will be some time before I'm able to return to Japan; I don't know if I'll live there again. So this list has become "Why I miss Japan": these are the points I loved about the country and what I think of when I reminisce.

I watched "Lost in Translation" for the third time the other day. The first time I saw it, I was appalled at what I thought to be stereotyped portrayals of Japanese people and unenlightened character sketches of Americans in Tokyo. The second time I laughed (because I knew some Japanese) at the conversations Bill Murray had with the Japanese characters, and I complained about the repetitive shots of the Tokyo skyline. The third time (this time), I watched the movie with much more appreciation for the movie's understanding of Japan and the strange appeal of Tokyo. Oh, and the skyline doesn't seem so repetitive now: I can pick out favorite parts of the city and remember my time there.

When I first went to Japan, I planned on staying on the west coast, called "Kansai": Osaka, Kyoto, Kobe, and, most of all, Hiroshima. My friends all came from Kansai, and why would I want to stay in Tokyo? I mean, really, that's the place everybody knows! But I spent some time there, and though I visited those places in Kansai--with no complaints about my time there--something about Tokyo drew me back. Tokyo is the New York of Japan, but much more. Los Angeles has Hollywood; San Francisco has the Golden Gate Bridge; Boston has, well, a bunch of history; other places in the US have their unique stories; but Tokyo is all of these things for Japan. Everywhere else, even the 18 million people-strong Osaka-Kobe-Kyoto megalopolis, is called inaka--roughly translated as "countryside"--and after four years there that distinction has come to make some sort of sense. Tokyo is just special.

When I first arrived in Tokyo after the hour-long bus ride from the airport five years ago, I looked down on the city from the elevated highway making its way to Shinjuku and felt excitement welling in a way it so rarely does for me in these mundane days: absolute fascination with what the future held for me, unfettered by fear of complications and unpleasantness. Vertical signs I couldn't read could hold the untapped magic childhood had once promised; even later when I learned that those signs meant "hardware store" or "police department" or "plus sizes", somehow the appeal was only slightly tarnished. Architectural masterpieces and oddities that dominate the sky, though not for much longer: the SimCity mega-towers of Roppongi Hills will be around until they fall in the next big earthquake, but the bristling Nakagin capsule hotel in Ginza, remnant of outmoded visions of the future, is set to be demolished. The inky-black Sumida river, coursing through Japan's recent collective memory: molded into the shape of the fears of modern concrete culture, but still stately and not yet broken. 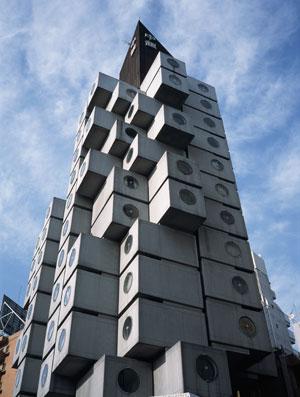 I learned early that Tokyo is arranged around its train system. Most of the popular areas are linked by the Yama no te line, an elevated train that circles the "downtown" area. Shinjuku, Harajuku, Shibuya, Ebisu, Shinagawa, Shinbashi, Tokyo Station, Akihabara, Ueno, Ikebukuro, Takadanobaba: every one of these is a monster city in itself, and the names are like magic spells to brighten the eyes and make the heart swell. Shinjuku has its stupid tall office buildings, right next to some of the tiniest bars on the planet, and the press of humans that travel through Shinjuku station is the largest in the world. Harajuku, home both to one of the most peaceful places in Japan and the stage for goth girls and rockabilly boys to strut their stuff. Shibuya: jazz, restaurants, wildness until last train and beyond. Akihabara, the undisputed home of techonology and technogeeks; Ueno, the oldest municipal park in Japan, with its cherry trees, lily ponds and museums. Takadanobaba, next to Waseda University, is home to some of the best variety of (non-Japanese) Asian food to be found and the best English-language used bookstore in all of Japan. These are just a few of the stations, on just one of the many lines that service just one small part of Tokyo. But it would take you a day to walk the line of the Yama no te, and you wouldn't even be able to do it that quickly, because you'd want to stop for hours in every one of these monsters, and the smaller monsters in between. 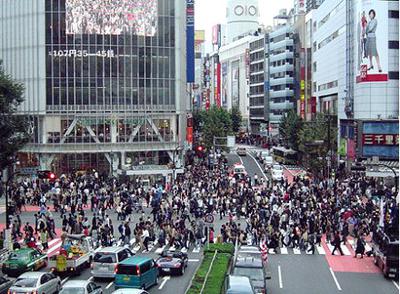