I've been off the air for some time now: a roommate moved out and we changed the internet over to my name, so we were without for a few weeks.

During that time, a few things have happened: I climbed Mt. Takao, the closest significant mountain to Tokyo; I got a new bike; and, last week, we had an okonomiyaki party at my closest school.

Mt. Takao is nice enough, but they were doing construction at the time I was there, I assume in order to prepare for the crowds that will head up the mountain to view the autumn changing of the leaves. Cars passed me on the paved road to the top, reminding me everytime as they whined and smoked by how much I hate the things, how they are so integral to our current world, and how many people have died in order to perpetuate their existence. But I gritted my teeth, imagined the rants I'd write here, and turned my head to look at the small streams and giant trees that lined the crappy paved road.

Overall, it is a nice mountain, though I can't say I'd recommend it as such. It is more like an amusement park for viewing the changing leaves, and I'd say take the train to Mt. Mitake instead. But I got some good pictures of the tengu (bird-gods from Buddhist mythology) that apparently aren't doing a very good job of protecting the mountain. 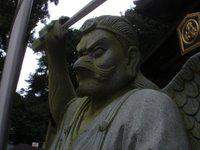 I got paid a week ago, and after saving for three months now, I was happily able to buy a new bike: this one with gears! It's not the bike I'd hoped to get, one about 40,000 yen more with 21 gears and more suited to touring, but I didn't want to wait until it got colder before I began to exercise again. This way I was able to get a some nice accessories as well.

Yes, it's a folding bike. For a long time I really looked down upon the things: very often they have those tiny 20" wheels, and I just thought they were toys. But there are some very serious bikes made this size, and one bike craftsman, Alex Moulton, builds his bikes with the belief that the smaller size is superior to the regular bike configuration we see on Tour de France and most other races. In any case, it makes the most sense for me: I can take it in a suitcase when I go back to the US, and I can easily carry it on trains here and easily increase my touring range. 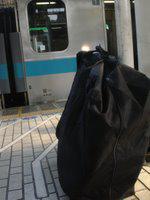 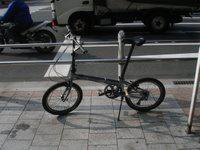 It is a good bike--it only has 8 gears and squeaks and makes other odd sounds, but the gear changes are crisp and it is fairly light. It will get me through the winter, and I hope to save enough money to get a more substantial bike for touring next spring or summer.

Then, last Saturday we had a party in Kita Senju, with many of the teachers and students of the school. It was a lot of fun--I see many of these people quite often, so have a pretty good relationship with them. 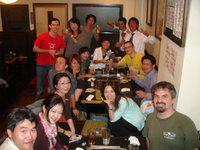 We had okonomiyaki--they give you the ingredients and you make it yourself on the grill at the middle of the table. It was delicious. 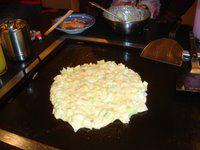 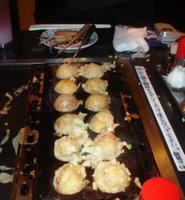