Today's the first full day in Kyoto. To be honest, my first impressions of the city weren't all that enjoyable - I had a terrible time finding the hostel I'm staying in because of the tiny alleys 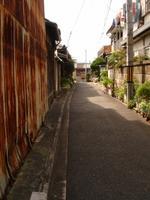 (no that is a street, not an alley), and with a heavy pack and bags it isn't much fun. I finally was able to find the place, however, and I ended up having an enjoyable day today.

I started with the Sanjuugendo, a temple with a ton of Kannons. Taking pictures isn't allowed, so I don't have any, but it is an amazing spectacle. There are hundreds of statues and each is subtly different from the next. You can only really see the front row, though, and after the 30th column or so they start to blend together. It was worth seeing for the sheer wow factor, but I left feeling a bit empty, as I often do when I leave buddhist temples (I guess you are supposed to feel empty after a visit to a Buddhist temple?)

What made the day was a visit to the Fushimi Inari temple to the south. This is a shinto shrine celebrating Inari, a god of rice, I believe, who is accompanied by two ghostly foxes.

I'm a big fan of toriis, the gates that adorn shinto shrines (there is a picture of a torii from the Meiji shrine in Tokyo in this blog), and 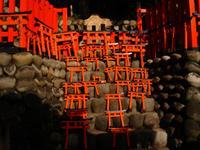 this, but this was just the beginning. There are Torii everywhere, from the small torii above to huge gate-like torii that you walk through in much of the shrine. 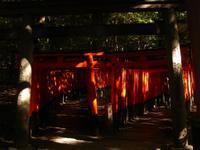 This image just scratches the surface - the torii are stacked like this for miles, and though I spent about 2-3 hours wandering through the park (actually a mountain - I went to the top as well), I didn't see all of them. You walk through the torii to the next shrine which is covered with torii 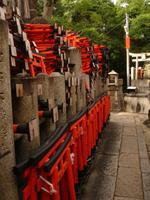 then you walk through another group of torii. 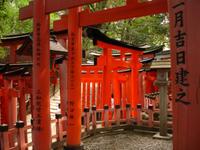 I took hundreds of pictures of the things, but could hardly have captured a thousandth of the number that are there.

Well, I've rested up and now I'm going to try to catch a bit of Gion (the "entertainment district") after dark. I guess I'm going to head to Osaka tomorrow, though Kyoto is so close I will probably come back.