Today was very much a grit your teeth and push through kind of day. 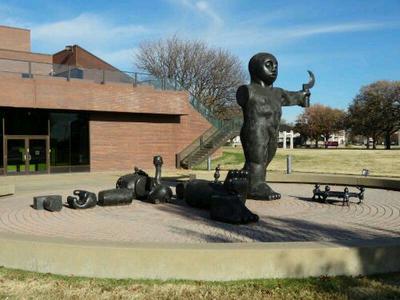 Making my way from dad's to the edge of town wasn't bad. I was tired from lack of sleep, but the bike was fine and the route through Wichita was really pretty biker friendly once I got out of east Wichita. And west 21st street, which led from Wichita to Kingman, was remarkably quiet—I think I saw 10 cars on it the whole day. 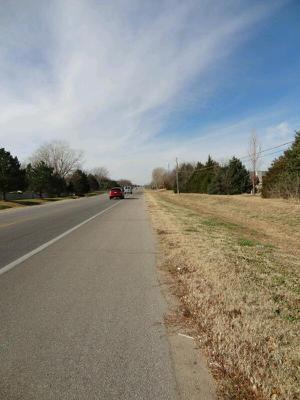 An idea from another bike touring fool: a picture from wherever I am at 11 am. Today? Outskirts of Wichita.

Kingman was a nice little town. I wish I could have checked out the main street, but the sun was going down. I met a guy who was very enthusiastic about my trip, and had done some touring in England himself. I gave him my card.

I traveled on highway 54 from Kingman to the lake. It had a nice shoulder, but was full of of semis. But about 5 miles from the lake an entire side of the highway was closed off for construction, so I ended up riding that side all by myself! More of that tomorrow, too!

And there was a beautiful sunset to greet me at the lake. 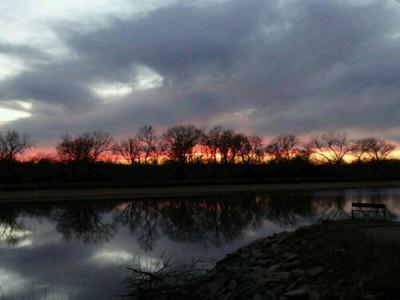 So what's this "grit your teeth" business?

I was pretty worn from not getting enough sleep, and that always makes things difficult. But, really, it was hard to leave my dad's. It was easy, pleasant. Unlike Lawrence, there were new places to explore. And while I can't stand watching TV by myself, there's something about sitting with family and laughing at the Simpsons.

So trading that for another day of fighting a cross wind, getting chased by (in the end harmless) dogs, feeling my toes numb as my butt aches, passing one more cattle ranch or empty, dead field, all while my brain is yelling "are we there yet? Are we there yet?" made me a bit impatient. 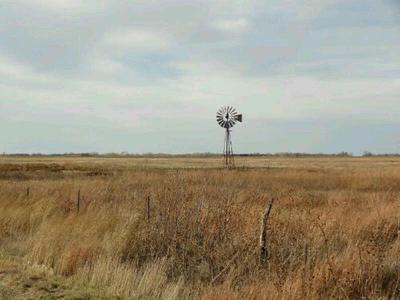 But there's a lot to look forward to. I have to toughen up a bit, I guess. I think these thoughts were playing through my brain when I noticed my back tire was sliding around: a slow leak. Slow enough that I was able to get some groceries from Casey's and over to the campsite with just a couple of pumps, so I kept my cool, though I was a bit unhappy to have a flat so soon in the trip—my tires were not cheap. But I later found a thorn had been the culprit, and those are just made for putting holes in tires. In the end it was no big deal, though finding a hole in a tube in the cold is not something I recommend.

The moral is: trip, I'm expecting a lot out of you. I'm putting in the effort. Don't let me down.