Yesterday was a weird day. I first noticed something was different when I rode the train to a bookstore near the imperial palace - the train's announcements of the stations was uncharacteristically off by one station, and the bookstore, along with an underground passage connected to it, was closed, unannounced. I wandered around for about 15 minutes to make sure I hadn't missed anything, then decided to go to the Shinjuku branch of the bookstore.

This went fine, but, whereas the trains on the eastern side of the city had been eerily empty, Shinjuku station and its surroundings were incredibly packed for a weekday afternoon. I wrote it off as I wasn't sure I had ever been to Shinjuku on a weekday afternoon. Still, the streets, normally packed with cars, were now packed with people (you may be getting the idea it was a holiday, as I did).

I was happy to find my store was open, though extraordinarily packed. I found a book I was looking for, then went to Starbuck's to get a coffee and read the book (I normally hate Starbuck's but it is the best coffee I've found in Japan so far). Again, extremely packed.

I left, then found a Victoria sporting goods store which was having a sale. I decided to go in, as there are few things I like shopping for more than camping equipment.

As I was shopping, I heard Ric Springfield's "I wish I had Jesse's girl," which I found just absolutely hysterical! Here I am, in Japan, shopping for a camp espresso maker, and I hear a song that has tortured me since kindergarten playing on the radio. I couldn't help but laugh, loudly. I hated that I couldn't explain my laughter to the other customers or... someone.

Then, on my way back to my dormitory I found this guy. 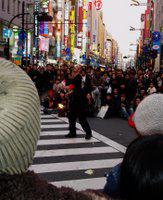 This is one of the main thoroughfares in Shinjuku that I mentioned earlier, and by now I knew that something was going on. In any case, he is juggling an axe, a chainsaw and a torch. He was quite a showman. 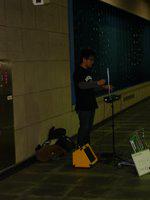 At the station I found this guy, playing Christmas tunes on a Theremin (is "Somewhere Over the Rainbow" a Christmas tune? Well, anyway, he also played "White Christmas," and his sign says something about Kurisumasu). If you don't know what a Theremin is, it is an electric instrument that uses hand movements to create Star Trek-style eerie, spacey sounds. This guy was pretty good, though he missed a few notes.

I figured out, finally, that yesterday was the Japanese Labor day. So there you go.

Happy Thanksgiving! Nothing's happening here (which is fine with me), but all you Americans, enjoy yourself.