Sorry about the wait

I met my dad a couple of days ago here in Albuquerque, New Mexico. We're leaving tomorrow, but we did a few things, and I took a few pictures.

Yesterday we went to see petroglyphs. The petroglyphs are images scratched into rock as long ago as 1000-2000 years ago, though most of them are from about 500 years ago. Still others are from a few days ago, as "vandals" like to write their names on rocks, too. 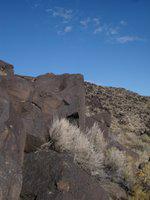 You can see a snake in the middle of the picture, and this next shows a rat with a rattle (my dad enjoyed the pun) on a more solitary rock. 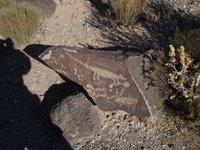 Today we went to Santa Fe. 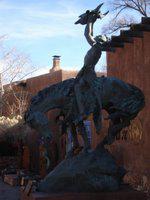 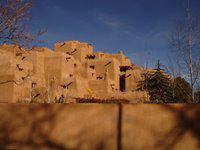 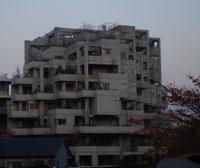 A building I saw in Oji, in Tokyo. Eerie, isn't it?

I have yet to figure out the plan of this building. Just when I think I find a symmetry to it, I find some balcony or wall that breaks that symmetry. It looks as if it grew organically.

We took in the church with the miraculous staircase in Santa Fe.

It's said that builders, confounded by the small size of the chapel, couldn't build a way up to the second floor loft, and so the nuns prayed for help. Soon thereafter a man came and built the staircase (minus the banister - that was built later for ease of use), a marvel to architects, according to the prerecorded guide given in the chapel. It is rather impressive. 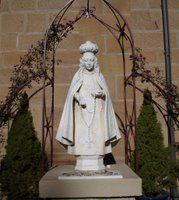 This Mary that caught my eye ("Maria Conquistadora") is outside a basilica in Santa Fe.

We breezed through Santa Fe in a couple of hours, and with time to spare, we decided to head to the Taos pueblo. Unfortunately, the pueblo was closed - people live in the pueblo, and they close some times for religious and other occasions. However, it wasn't a complete loss, as we had a chance to see the sun set on the Sangre de Cristo Mountains (that's "Blood of Christ," so you know).