First, a belated picture of the family I'm staying with here in Hiroshima. My friend Shinsuke was still working when we did this, so he's not in the picture, but in back is the Father, in front grandmother and mother, and cat (Kuu). 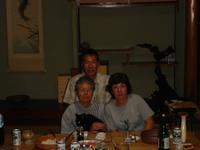 This was taking just before we had dinner that night, a "make your own" style of sushi. 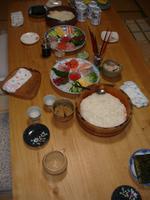 The father is heir to a line of pottery makers, and though he has a full time job as a public servant of some sort and thus can't make any money on the side, he does pottery as a hobby. Yesterday, a friend of Shinsuke's came over to make pottery, and so I was invited along. 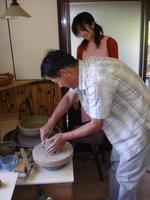 The finished product is probably three-quarters the father's doing, but it was interesting to participate.

Then, after that was done, we had a big barbeque, with many of Shinsuke's friends coming to visit and eat with us. 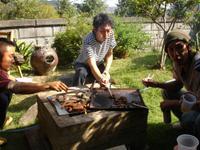 It lasted (or, really, I lasted - the party continued after I went to sleep) from 12 to 12. It was fun, though I ate and drank too much.