11/19: Up and down—Boise City to Black Mesa State Park 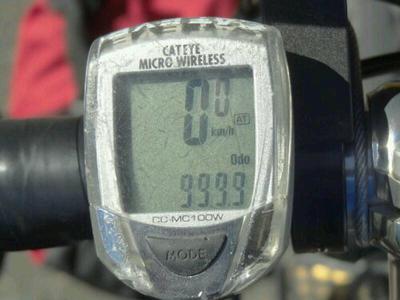 I started the day GRUMPY. I stayed up too late last night watching TV (TV sucks without someone to watch it with), and so I slept in. I didn't want to sleep in. I wanted to head out bright and early, get to Black Mesa in time to do a hike before camping. Instead I was looking at another day of fighting with time.

Time and wind. The wind actually turned around on me overnight: I slogged through a south wind when going south to Boise City yesterday, and now that I was going north to Black Mesa, I got a north wind. I felt cursed.

But I pushed on. The wind was a cross wind today, but it was stronger, I think. And I don't know about you, but I'm sick of plains scenery. But somewhere in there I started feeling better. I was rescued from my personal prison of having everything around me, and riding my bike was just something I was doing. It wasn't good, it wasn't really bad. It was moving. It was being somewhere, moving. 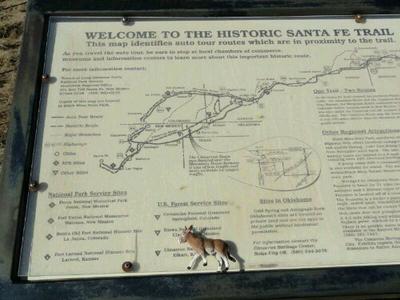 The last I saw of Rocinante :(

The signs for Black Mesa seemed to be wrong. They were telling me I had about 10 miles to go, when my computer clearly showed something on the order of 30 more.It was weird because the signs usually said more rather than less, and were usually right. It took a while, but it finally sunk in that there are TWO Black Mesa State Parks. One is for RVs and camping, and one is for the mesa itself. There's about 15 miles between them.

This realization brightened the day even more. Now I'd be at the park at one in the afternoon, plenty of time to drop off my stuff and do some hiking. I had been thinking about staying two nights, but here I could do it all and keep moving. Things were going my way.

And then I entered the park.

For weeks now I've been traveling through fields, riding on busy highways, with only grain elevators to indicate I was moving at all. I'd really begun to wonder why the hell I was doing this.

And then I entered the park. It was like a wall came down, fell down on me. I saw mountains in the distance, I haven't seen mountains in a couple of years, and it felt like a wound I didn't know was there was suddenly healed. I know I longed for mountains after I came back from Japan, but those memories were distant and I thought the apathy I've developed since then was a sign they'd lost their charm, that I had changed somehow. Not at all. I'd just forgotten. 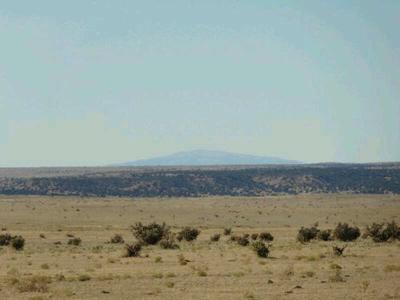 The mountains were in the distance. But this area of mesas, too, is beautiful. It is amazing how much variety in land forms can stimulate the emotions. At last I felt that there is a reason I'm doing this stupid trip other than to be true to the dream I had when I came back from Japan. It was this, to rediscover the beauty and variety of the world and be moved by it. I teared up. Or maybe it was the wind. 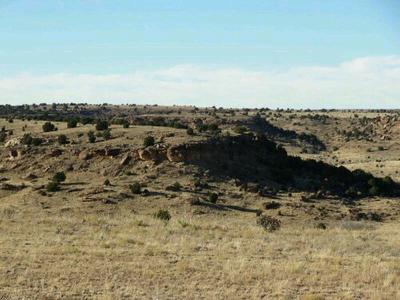 My pictures don't do these justice. Tomorrow is better 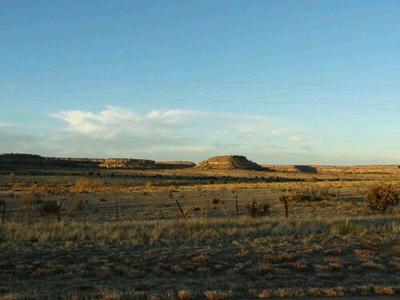 I dropped off my bags at the camp site, decided I'd probably stay a couple of nights. I headed up to Kenton, a city nearby, to stop in at the local mercantile.

I found a hill. It was the steepest hill I've seen thus far on the trip, though I'm sure to see plenty worse in the near future as I cross the continental divide. Then CHINK. My chain fell off. A link broke. I couldn't believe it. I scrambled to remember if I'd brought a chain break, and where it might be. Back at the camp, if anywhere. I used my Leatherman to push the link back together temporarily, then rolled back to camp.

The chain break was there, as were a couple of replacement links I'd bought in Wichita as an afterthought. I repaired the broken link, hoping without hope that it would stay together, then headed out for Kenton again. My repair seemed to work pretty well, but I didn't get very far before the chain fell off again. I wondered what the hell I was thinking, heading into the mountains: this stupid chain can't even handle some silly hills. Anyway, I did a more thorough job with the old link and managed to get the bike all the way to Kenton.

The shop was closed. I almost expected it. Not a big deal. I was really just looking for milk to make mac and cheese, but some snacks might have been nice. But there was no arguing: the place was closed. I headed back to go for a hike.

People in Oklahoma have been very nice. Maybe every third Kansan waved at me, but everybody in Oklahoma waves. As I passed out of town, a man working in his yard waved at me. He seemed friendly enough, so I asked him if the store was definitely closed.

His name was Dewey. He said the store was closed, had been for a year. He asked what I needed, offered me a coke. I asked for some milk and he invited me inside.

He had just moved to the area in June, recently retired. I took a liking to him from the start; we seem to have a lot in common. He was a bit of a loner and a bit of an adventurer. 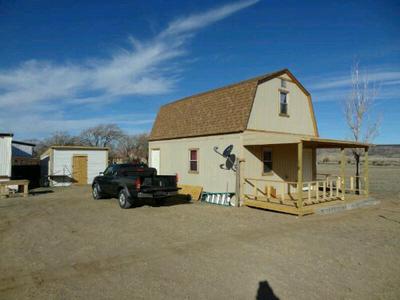 Dewey's place. Didn't get a picture of the man

He has lived in the Oklahoma panhandle since childhood, and it was his dream to live up here when he retired. He lives with a cat (didn't catch his name), his best friend. That endeared me even more to the old guy.

The sun was getting low, so I excused myself. But I'm meeting him again tomorrow; he's going to drive me to see some petroglyphs before I go to hike the mesa.

On the way back my chain broke a third time, so I used one of the replacement links I'd gotten in Wichita. I'm so glad I got them. I really would have been in trouble if I didn't have those links. Hopefully the chain will hold together now until I can get a new one.

PS I found out later I'd lost Rocinante. I think I left him on a sign on the Santa Fe trail (shown above). I hope some kid finds him and enjoys him.