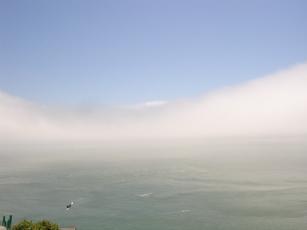 Instead of San Francisco, fog

I have been staying with my friend Amanda in Daly City, "Gateway to the Peninsula", a city just to the south of San Francisco. It's an ugly city, with not much going for it beyond the fact Amanda lives there (hi Amanda!) and it is, well, "Gateway to the Peninsula", as every freeway onramp is happy to tell me. And it's foggy - I had no idea. June 30th, and it is 70 degrees and completely foggy. Ridiculous.

I left the city at 2 pm, 3 hours later than planned, but at least I finally left. My head was in a fog from too much beer and very little sleep. I'm on my way to Lawrence, Kansas, to sponge off my parents for a while as I look for a job in Japan.

I took a few last pictures of Coit tower, my favorite SF landmark, and, biting my lip (I'd just had an emotional parting with Naoki, a Japanese friend staying in SF, and that brought my mood down a bit), I headed towards Golden Gate Bridge. I thought I'd say goodbye to the city from the other side of the bridge, in Marin, where on a clear day you can see the entire northern half of the city.

Having lived in the city for 5 and a half years, I should have known better.

As soon as I reached the bridge, I realized it was a typical SF day. Fog was covering the bridge, just as it had been covering Daly City most of the day and was just beginning to cover SF itself. Thus, no final pictures of the city, no goodbyes, except to fog.

So I left, went up Highway 1 along the coast. Here again, of course, everything was covered with fog. Quite haunting. 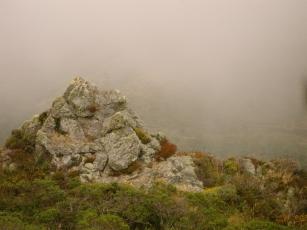 A rock soaks up the fog |

I wandered through that for a while, until I realized it would take several days to travel up highway 1, then turned off to go to Highway 101 and take that up.

I ended the day just north of Leggett, California, at a medium-size campground called Standish-Hickey State Recreation park just off the highway. It was nice except for that one catch - it was on the highway, and I could hear semis barreling by all night long. But it was a very pretty campground, with trails leading off to the remarkably clear Eel River, and I wasn't complaining too much.

I didn't sleep well, though - it's been a while since I've camped.

I hiked down to the river the next morning and sat staring at it for about thirty minutes, thinking about San Francisco and the cat I left behind, Doris. Then I left, got back on Highway 101. 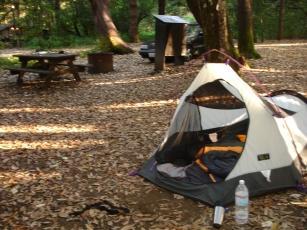 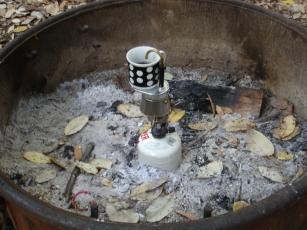 From the Decadent Camper catalog, the camping espresso maker |