1/29: Bussin' it—Ensenada to outside Santa Rosalia

I was well taken care of in Ensenada by Ruth and her family. They cooked for me or bought me dinner, and only made fun of my Spanish once in a while.

Ensenada is a pleasant place, if a little rough around the edges. The first two days it was overcast so I didn't do much. But the last day, yesterday, before I took the bus I did a little bit of wandering. 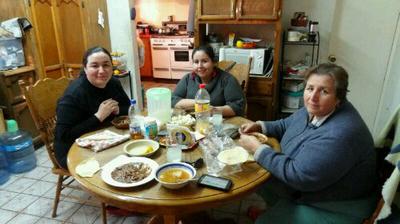 That night Ruth's mom made mole, and we had one last dinner together. Then Ruth and her sister took me to the bus station to get my ticket, then I went back to her house, packed, and rode to the station to get the bus at 8 pm.

I had to push my bike through the station for some reason (I could just as easily have walked around the station building). An older man, who spoke excellent English, and his son helped me push my bike up the stairs. Everyone was very friendly, and when the bus arrived I got everything loaded no problem.

I feel good about my decision. I think it might be nice to visit the central desert of Baja on its own, but I just don't think I'm the desert solitude kind of guy. It didn't look that much different going by my bus window from the deserts of Arizona and California.

Sta. Rosalia was nothing special. I packed up my bike and rode through the tiny town, but didn't find anything to hold my interest (I came back later to find the real town is up in the hills, and worth a visit, though it doesn't have much of tourist interest other than a prefab church built by Eiffel). I found a campsite early in the day, south about 10 miles from SR. There are two sites right next to each other separated by a flimsy fence. I wandered through one: a small city of RVs, the beachside already claimed by snow birds. I decided to try the other where there was a single RV. The owner of the RV came out, thinking I was looking for another cyclist who had come in the night before. He was a nice guy, the beach front was open, and it was just a bit cheaper, so I decided to stay. 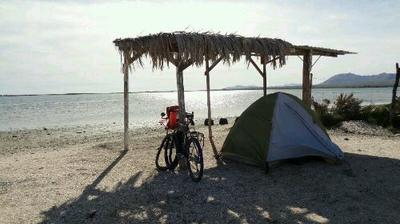 It was early in the day, maybe 11, so I just sat and thought. Royce, the guy next door, was nice enough to bring me over a lawn chair, so I sat in that and thought. Later, Royce's wife Sue came and chatted me up. She's from north of London and has become a real benefactor to the tiny village next door to the campgrounds.

I went to the village and picked up some food for lunch and some beer, and when I got back I set up to relax some more. I'd had a little anxiety coming in to SR, but sitting in the sun watching birds dive and dive again, everything became basic.

Later the cyclist Royce had seen earlier wandered into our side of the fence. He had been left behind by a "friend" who intended to get to Cabo San Lucas in 13 days. We agreed that was an unfun schedule.

Morgan had been a Mormon missionary in Buenos Aires, which was pretty fascinating. He wasn't religious before and isn't religious now, so it's a curiosity why he decided to do that. But he filed me in on some interesting facts about Mormon undergarments.

He had been left without a tent but had friends of the family in the neighboring campground. We might end up riding together to Mulegé, where I plan to spend a good deal of time.

Morgan left, and soon after Royce showed up, returning from a card game with the locals. He and Sue invited me over for dinner in their RV.

We had a really good time. Sue made a tasty mix of beans, rice and tomatoes, and we had some wine with dinner. I haven't drank for a while and got a good amount of beer in me, and they were drinking gimlets and each had a shot of tequila. They told me the local lore and gave me advice about Mulegé. 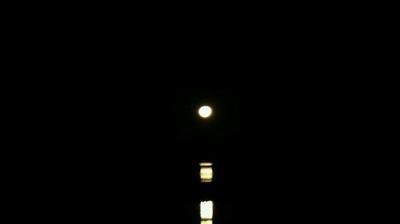 I saw, for the first time I think, the moon rise. It was just edging away from the full and was still quite majestic above the lagoon, floating in a long, glowing stream on the water.

I'm staying another day, then will make my way down to Mulegé.