11/6: At last, a good choice—Council Grove Lake to Marion Lake

I started the day thinking I might just stay in Council Grove. It was a free site, I wasn't in that big a hurry. And the wind was just as miserable as the day before.

I contemplated for about an hour. I hated the idea of dealing with the powerful wind that dominated the day before. But every time I thought about it, I thought "I want to ride". Not because I was in a hurry, not because I'd feel like a wimp. I just really like the feeling of sitting on the monstrous thing, moving along through headwind and through tailwind.

So I finally gave in to these cruel urges and decided to keep moving.

I'd planned to head to McPherson Lake, east of McPherson. This meant more jockeying with gravel, so I really wanted a different option.

When I got to Herrington after miles of fighting the exact same crosswind from the day before, I had to make a choice. I could go east or south. East was more slogging, but possibly less gravel when I went south later. Going south now meant a beautiful, beautiful tailwind that could push my wide load even up hills! But that would mean suffering through gravel as well as crosswind if I turned east to McPherson park.

I say "if" because I had begun to think of continuing south to a city. I didn't know the conditions on the road to the park, and I was just plain sick of the wind. Why not use the wind to my advantage and head south to a city? It might mean shelling out for a motel, that's why not! But I began to really entertain the idea, and when I got to the turnoff for the park and realized I had another 30 miles to go, I decided to go south.

The most likely candidate was Marion, a fair-size city with a lake, so I flew along with the wind that way.

Just at the turnoff for Marion, I caught sight of a couple of fellow travelers. Their kit was very different from mine, and I felt a bit overdressed. They were walking their bikes into the wind, one with barely any equipment on her bike, while the guy I spoke to first had a trailer and a pet carrier. They looked pretty rough and, while not unfriendly, didn't offer much information about themselves. The guy told me the girl had had a lot of difficulties at a homeless center in Wichita; they were headed from Wichita to Massachusetts by the most direct route. In the pet carrier were a couple of kittens, they said. Their names were Storm (the guy) and Raven (the girl). I didn't ask.

I showed them my map and then wished them luck.

Marion had a nice big city park so I asked about camping there at the city office, but found a brochure for the lake, and now here I am, camping in my third free site! Best, it looks like tomorrow will not only have a tailwind most of the way, but my trip will be considerably shorter. 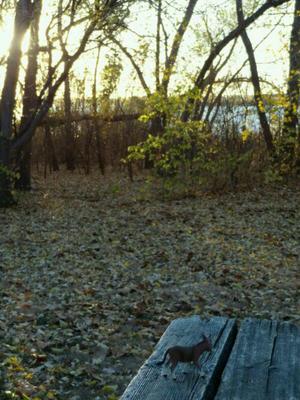