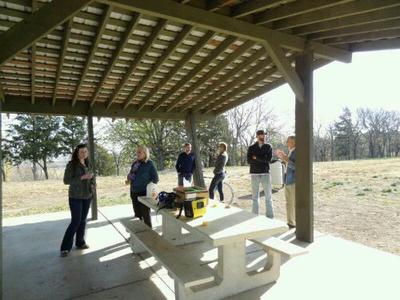 Today was a good start. I rode with a few friends to Well's Overlook (nearly blowing a gasket on the way up the hill), then met a few more friends there. We ate bagels while we talked about my trip. People slowly said goodbye one after one, then Billy and I rode a bit more together. We parted ways near Clinton dam. 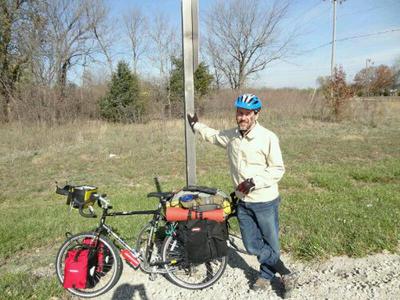 I felt good but sluggish, but the day was pretty good. I didn't think about much; now that I'm on the road it's a little easier to let go of all the "duties": for now I can't do much more than ride!

I spent a fair portion of the day on gravel. It wasn't too bad. But I was definitely slow: I'd ridden my bike with most of my stuff before, but I've added a large bag with food and odds and ends, and I think that bag itself weighs as much as all my other bags combined. I might have to reconsider some of the odds and ends when I get to Wichita. 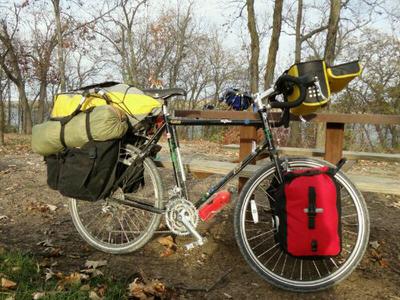 Pomona's 110 mile park is nice enough. No one's here: it's Sunday and getting COLD! The sun's just gone down and the temperature's dropping. I'm lake-side, which may make things cooler. It'll be good practice for later, on the high plateaus of Arizona. It's just now 6, and even with the time change it's a bit early, but I may curl up in my sleeping bag here in a bit.

Update: Just as I was about to zip into my sleeping bag, a rumbling mini van turned in to the camp ground. My first thought was that it was a ranger, then a camper, but then I heard a familiar voice: "Jesse, is that you?" Barbara from work and her husband Harold had come out to meet me! They weren't able to come to Well's Overlook, so they came searching for me at Pomona Lake. They didn't say how long it took, but I'm guessing they were at it for a while. Barbara brought me some homemade bread. What a great person! It was a real pleasure to see them both, and a great surprise.