1/9–1/11: Big Winds, Kindness of Strangers, and Expensive Camping—Indio to Anza to Lake Elsinore 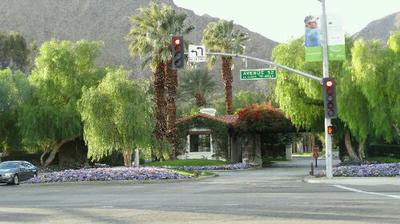 Willows and flowers in the winter desert

I talked to the camp manager first thing. At first he confused me with another camper who was looking for a job. We talked about traveling, and he was very enthusiastic about my trip.

I then went to use the Wi-Fi, provided near the camp host's trailer, where there was a little picnic table set up for people to bring their computers. I started talking to a woman who was sitting there. Her name was Manon (I hope that is right) and she was coming from French Canada to a fellowship in Irvine (where I'll be tomorrow!). She's an expert in occupational therapy and helps set up houses for the elderly and those with disabilities. She very graciously offered to get me in touch with someone in Brazil.

She also warned me about the weather where I was going, and the climb into the mountains west of Palm Desert. I was planning to go to Idyllwild, but hadn't even thought to consider the weather—it was so warm in the Palm Springs area! But the next day was forecast to have 20–30 mph winds with snow likely and temperatures well below freezing. Time for a change of plans.

I decided to skip Idyllwild and head straight to the valley on the other side. With that plan, I packed up and headed back to Palm Desert (my campsite was about 12 miles out of the way).

I thought I had plenty of time, as I was only doing about 30 miles, so I decided to do some shopping, first online then offline. I ordered some Schwalbe Marathon Mondial tires, then looked around for some sandals, as things are getting warmer (for the most part!). No luck on the sandals.

By this time it had gotten quite late, around 2, and I decided I wouldn't be able to make it before dark. I was kicking myself for taking so long but in the end it may have been for the best. I headed back to the same campground.

I decided to stop off at Trader Joe's and got myself some goodies and beer. The beer, a Mission St. Amber, was really tasty. I went to sleep early.

I woke up at about midnight to Metallica's "And justice for all" blasted from somebody's car stereo. It was the out of work guy, maybe blowing off some steam. I used to really like Metallica (though their lyrics didn't strike me as quite as profound as when I was 14), but didn't much care for it after midnight. I put in ear plugs, but he soon turned it down.

I woke up at 4:30 to my tent flapping in the wind, and got out to find all the stakes had been pulled. The wind died down pretty quickly, but I knew more was coming so I decided to pack up and get an early start. I was thinking about heading all the way to Skinner Lake—a full 80 miles away. Looking back on it, I can't figure what I was thinking.

Soon after I set out the wind picked up again. Dust rose from the horse tracks and construction sites, and huge tumble trees threw themselves at me. A fun day was beginning.

While having breakfast at a fast food joint, I happened upon a host from Warm Showers who accepted riders on short notice, so I emailed them and asked them to call me. They were only about 40 miles away, which made a lot more sense. 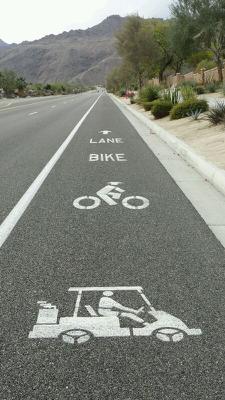 I was about five miles into my ride when William called. He was happy to let me stay. Thankfully...

I had 5100 feet of gain, and the winds were ferocious. I think this was by far the hardest climb I've had. At many points the wind was so strong I had to get off the bike and just hold on to make sure the bike didn't fall over.

Once I got my leg caught between the pedal crank and the frame while the bike was trying by to go back down the hill. The wind must have been 40–50 mph. I could barely hold on, and I began to think the crank would snap my shin bone. I'm probably not giving my bones enough credit, but it was a scary moment.

These gusts calmed, but I was fighting 20–30 mph winds the rest of the day. I had thought I would get to William and Marcia's in the early afternoon, but it was soon clear I'd be lucky to get there by sundown. Very, very thankful I had a place to stay that night.

Then the snow started. It was more pellet snow like I had seen in Payson last month. I was actually glad to see it because I expected rain, and beyond obscuring the road a bit there wasn't much of a problem. 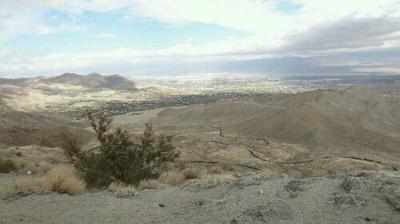 Finally I made it to the pass and a downhill began. Pines and other trees began to line the road as I was finally leaving the deep desert after a month.

I got to William and Marcia's in the darkness and William came out in his truck to light up the dirt path up the hill that led to his house. 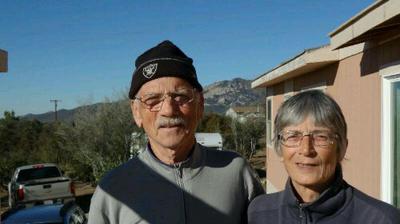 They are really an amazing couple: just in the last ten years they've been all over the world on bikes, including Russia, China and Japan. William had a lot of stories, and he had a funny habit of moving from one part of the kitchen to another and back as he told them, as if to punctuate his words.

I unabashedly ate everything they had, I was starving. They were very gracious, even offering their own bed to me! But I was fine sleeping on a comfy foam mat in my sleeping bag.

When I woke they were sitting by the fire, listening to something in the Great Courses series. I could hear them discussing the subject, though I couldn't make out what they were studying.

I once again ate everything they had for breakfast, then we said goodbye and I headed to Temecula and Lake Elsinore.

On the way I saw another tourer. He had flown from New York to San Diego and was riding to Tucson. I warned him about the hill I had ridden the day before and we discussed our roads so far, then parted ways. Didn't get his name.

Most of the day was downhill. Temecula started with a long strip mall, where I found some cheap sandals, then it turned into an old Western town with some character. I wished I had time to spend there, but decided to keep moving. 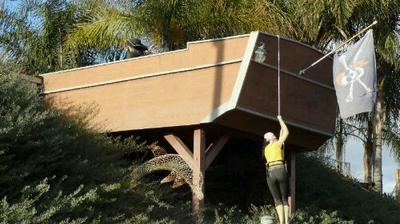 Things don't seem to be going well for the pirate lady

The camping book I have said the Lake Elsinore camp ground was 15 bucks; turned out it was 25. This made me angrier than I've been in a long time, but I had no choice. Cheaper than a motel, I guess.

I've got more hills tomorrow, then I'll be in Irvine and near the coast!