Well, after a lot of hemming and hawing and waiting for new tires to arrive, I finally decided to head into Mexico. To be honest, my heart hasn't been in it. The last two weeks have really taken a lot out of me, and I was considering some other possibilities. But in the end I decided to give at least Baja a try; if things don't work out, that's fine, but I couldn't come so close without at least taking a look. 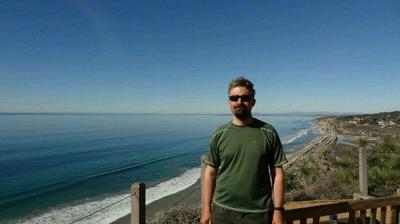 At Torrey Pines with Cindy 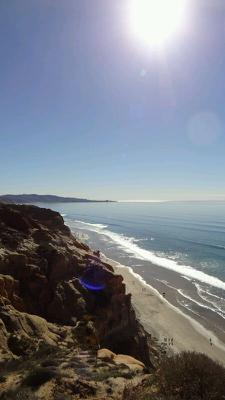 To catch up a bit, I hung out at Cindy's and Renae's for a couple of days, then went to a hotel in a nearby city in San Diego to wait for some new tires and to take some time to think things over.

At last I decided to keep moving, and the same day my tires arrived at Cindy's. Seemed like a good portent. The next day I picked up the tires from Renae at her office, then headed down to Potrero County Park, two miles from the border, for a last night in the US.

Every other car on the road was border patrol. I stopped at a convenience store before the park for my usual soda and milk, and on my way out a truck driver named Juan told me that he wished he could do what I was doing. We agreed that truckers and bike tourists have a common love of travel. 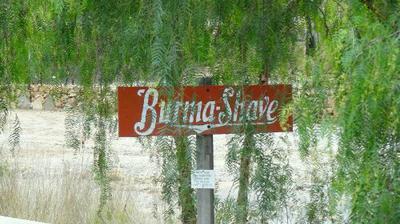 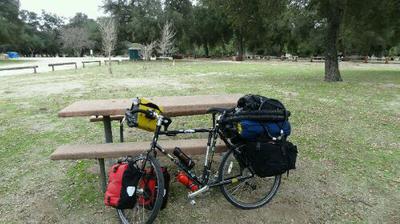 The rangers at Potrero, truly fine human beings, let me stay at a hike and bike rate! No prompting from my side, because I didn't know it was allowed there, but as soon as I got there they were discussing it and agreed it should be done. It was a pleasant experience.

Before heading to the border crossing the next morning, I found a library and checked a few things out on the internet. The librarian let me in early, and she and another patron and I had coffee together.

Then suddenly I heard someone yell the mf word outside, and there was a scuffle. We all got up and went to see what the matter was: apparently two locals had gotten into a fight, and I saw a short older man with blood on his lip saying "I've got blood on my lip! He hit me." I guess there was some history between the two, but in any case the sheriff was called and it was all good fun.

After that I headed to Tecate for my first taste of Mexico. I went to the (completely empty) car lane for customs; the young guard looked a bit like he thought I was crazy, then sent me to the pedestrian entrance. There I managed to completely miss the door for migración, very clearly marked. I came out the other side of the pedestrian entrance and in an unconscious mix of Spanish and Japanese, said, "migración wa?" Another guard led me to the correct office and I went through the process. The clerk there gave me 180 days, a healthy length, I think. 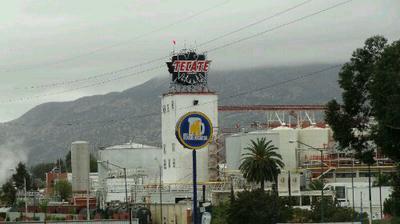 Tecate wasn't much to write home about, except for the stark change in the economy. I sort of expected it, but it really was remarkable how run down everything is, from cars to buildings to roads. The natural landscape was the same but the difference from cities in the US was noticeable.

After taking a few moments to let the "I'm in a different country again" feeling sink in, I made my way to the Tecate–Ensenada highway, no. 3.

It was muggy. Not too hot, because the sun was hidden behind clouds, but I sweat more than I have on this trip. I quickly shed my rain jacket: I'm guessing it won't be much use, but I'm holding on to it until it's clear I won't be seeing any more cool days.

Sweating, I climbed out of Tecate. The highway is under renovation and there is now a wonderful shoulder for about three quarters of the road I rode on today. They seem to be working to sell the area as wine country. There are some beautiful views, too.

About halfway through, I ran into a military checkpoint. I used my pitiful Spanish to charm the guard into letting me by. I think he thought I was riding in on business (?) but when I said "turismo" he let me go.

It was getting near dark and I was starting to search for stealth camp sites when I found the campground I was looking for. The Rancho Sordo Mudo, just as the title says, is a camp for blind and mute children. I don't know anything beyond that, except that they run an rv camp as well. I tried to reach them from the phone outside the Rancho itself, then found the campground on the other side of the road. I don't think I'm actually supposed to be here, but I'm out of options, so hopefully they'll be kind if I see them tomorrow.

I managed to drum up some couchsurf hosts in Ensenada, so hopefully I'll be able to stay with one or the other tomorrow. Otherwise, there is a hostel there, not cheap, but maybe a good chance to meet other travelers.