Today was pretty much an exercise in moving myself up hills. Chiriaco Summit was at something like 1000 feet, while the campground I am at now is at about 3500 feet. 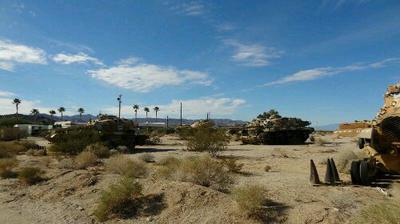 I took pictures of the tanks outside the Patton museum, but didn't bother to go in (the museum, you can't get in the tanks, silly!). After a quick ride on the interstate I took the road to Joshua Tree. 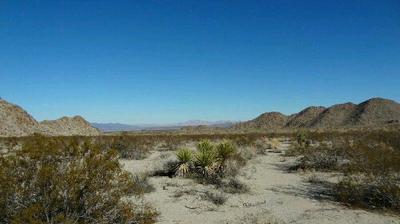 I'm not much for deserts, generally. Joshua Tree has some great mountains, but other than that I'm not so interested. There were some interesting cholla cacti, though. 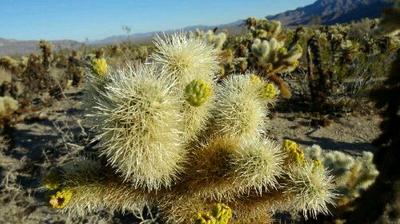 Outside a "cholla garden" I met Gary, who had driven in and was riding his road bike all over the park. We chatted about touring, then I moved to catch the sun.

As I was nearing the end of the day, I saw a woman pushing her bike up the hill, with a tiny supply of camping equipment. She was weatherbeaten.

I asked if she was alright, and she asked where I was going. She was friendly, but her questions seemed perfunctory. I told her I was headed to Argentina and she said she had been there, that I would love it. She has been traveling for ten years now.

She couldn't use her smallest cog, so she was forced to walk. I wanted to talk to her, so I kept circling back. To tell the truth, though, I don't think she was interested in my company.

She also had flats in her tires and a problem with her pump. When I offered to help her, she said no, she would probably just leave the bike. "I've been vandalized so many times, I don't care anymore".

I continued to try to talk to her, but finally she said to go on ahead, and to have a nice trip to Argentina. The way she said it made it clear she wanted to be alone. I suddenly felt very childish, but I could understand how she felt.

I could be wrong, but she did not seem to be enjoying traveling; it seemed as though she was compelled to do it. Maybe it was all she had. I felt very spoiled to be able to take this trip for fun, with all my expensive gear. But while I'm compelled to continue this trip, to continue to see the world, I don't want to come to the point she seemed to be, worn out but forced by circumstances to continue. I hope I'm wrong and she was just having a bad day.

This is the first time on the trip there have been other tent campers. It's funny because it is just as cold as any other night I've been through, but there are many campers here tonight. I've heard some foreign accents here; I'm looking forward to meeting other travelers now that I'm in warmer climes.