I found out early Saturday that my friend Carrie's parents had moved to Mesa, not far from Fountain Hills, just the month before! She set me up with them, and I headed the twelve miles to their house. 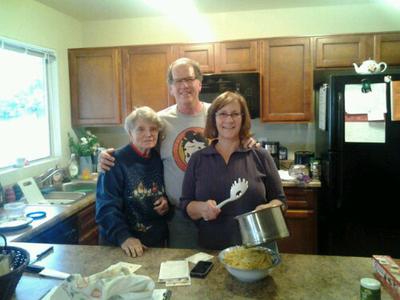 I met Walt, Carrie's dad, Deb, mom, and Pam, grandma, and they immediately made me feel at home. We had a lot to talk about. Walt was a big fan of bikes and had ridden from the Missouri–Kansas border to Washington, D.C., and had ridden in the mountains of Colorado. We talked about Carrie (whose birthday was the very next day—what? Life is weird) and her brother Tim, whom I'd met in the summer. It was kind of a shock, after several days alone, to suddenly have this connection where I least expected it.

Like everyone else on this trip, the family had dogs, but these were fun. Emma was a goofy old terrier (?) with arthritis, and Maddie was a goofy old Chihuahua mix that peered at me suspiciously from the corner of her eye and nipped at my pants leg a couple of times. Pets can develop some strange personalities.

Deb cooked dinner, and then Walt asked what I normally ate for breakfast. Thinking it was a general question, I told them I normally ate at diners because the oatmeal I have isn't enough to get me going in the morning. After dinner, Walt went to the store and got fixins for diner-style food, and the next morning we had blueberry pancakes, sausage, biscuits, eggs and hashbrowns! Really amazing.

After breakfast, I headed out. I didn't really have any idea what to do in Phoenix, so I'd looked up a meditation group on meetup.com the night before and found there was a group meeting. I thought it would likely take me to an interesting part of town and give me a chance to meet some people, so I decided to stop in. 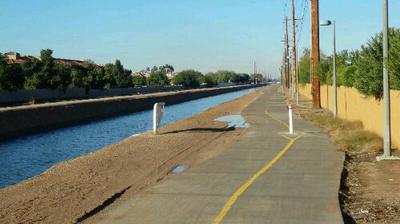 Can't say I was very fond of Phoenix. It has a bike path system following canals, like Albuquerque, but it felt very half-hearted. I rode through huge gated subdivisions and endless strip malls, then through poor residential neighborhoods to get to the location where the meditation group was meeting. This area, though, around fifth and Roosevelt, was going through gentrification and had some funky stores and artistic cafes.

I'd asked Kathy, the meetup group founder, earlier if there was a place to put my loaded bike, and she greeted me when I was trying to find the dance space where the meeting was to be held.

Everyone was very friendly, and we chatted a bit about my trip, Buddhism and meditation, and life in general. We then sat for 40 minutes, and I have to say I had one of the deepest sessions I can remember. I left feeling very alert and thoughtful.

The rest of the day I traveled through the government district, then the industrial district. Pretty grim, but for the occasional bougainevillea (no idea how to spell that). There were a couple of orange orchards, too. 60 degrees and clear, though, so can't complain too much. 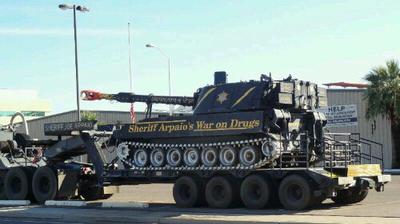 Clearly the war on drugs is going well? 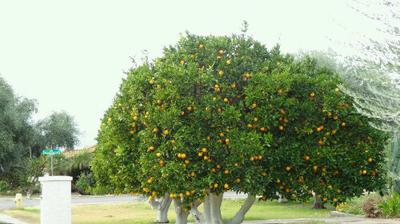 I made it to a park south and west of the city and set up. I'd hoped to pitch camp and then head to a grocery store, but the stores were just too far away. I decided to try a dish of both red lentils and quinoa and, what do you know, it cooked quickly and turned out pretty darn well. My ideas don't always turn out bad, I guess.