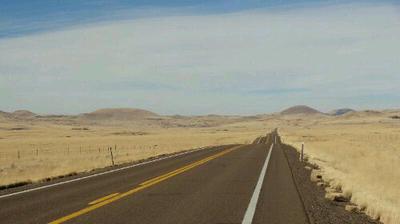 The wind is back, and so discouragement is back.

Not much to say about the 12th. The world didn't end.

Today, there was supposed to be a big snowstorm; there was a chance I might get stuck somewhere. Not very likely, but not something I wanted to risk. So I decided to try my longest day. Everyone told me it was all downhill, so I thought maybe it would be a fairly easy day.

Actually, the road ascended to the Mogollon rim, 7700 feet. So that was wrong. I reached the rim just as the sun was going down, and I had thirty miles to go. The view from the rim was breathtaking, overlooking mountains for miles. Unfortunately it was too dark to get a good picture.

I was able to fly down the road at 30–35 miles an hour for quite a while before it was too dark to see. That got me a long ways, but I still had far to go.

The fun began when the shoulder disappeared. By this time it was completely dark, so I had to basically jump off the road every time a car came. When it was completely dark, I'd ride, looking furtively in my rear-view mirror to make sure nothing was coming behind me. Sometimes cars would come up in the other lane and blind me. If I saw lights behind, I'd hit the brakes and push the bike off the road.

This was not fun. This scared the crap out of me.

And then it was over. I reached Payson, found the cheapest motel yet, and enjoyed a shower.

Tomorrow I descend out of the mountains, finally! I love mountains, but they aren't the best place to be in winter.