It's now the tail-end of fall, and I had hoped that this year I might do something special for the season of the changing leaves. I've been to Nikko before, but never during that period; from what I'd seen in pictures it seemed quite spectacular there.

I'd been to Nikko a couple of times, as I've written elsewhere. I spent a lot of time hiking there, but this time I wanted to bike around to get a better view of the whole area. I was able to find a great route on a mapping site, and set out.

I managed to get a great deal of sleep the night before--often, because of the early hour I need to rise in order to have time to do everything I want to do, I only get a few hours sleep. This time I was well rested, and it showed--when I got to the top of irohazaka, a daunting hill of switchbacks, I thought "that's it? It used to be a lot harder!" It was a great feeling, and I laughed and sang through a tunnel to Lake Chuzenji.

When I reached the little town that lines the northern edge of the lake, I overheard a woman say "looks like the changing of the leaves is over." Indeed, Mt. Nantai was bare. I was a little disappointed, but I had expected this, and was really more interested in the ride around the park. 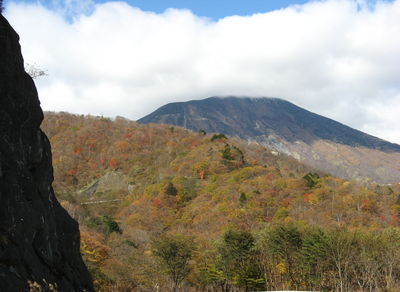 I continued riding on to Senjogahara, a meadowland I mentioned in my previous post on Nikko. All that was to be seen this time were the beautiful white birches and, of course, the sense of wide open space not easily found in Tokyo. I ate lunch--a Koyadofu mabodofu, great with rice for bike trips. 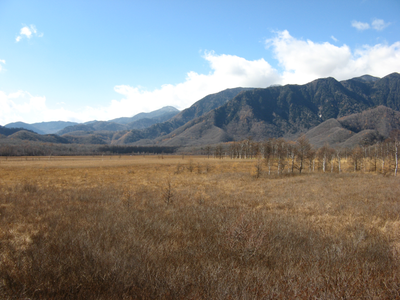 Next, I headed to realms new to me: to that point I'd stuck near Chuzenji, but the path I'd found led off the beaten track into the mountains north of Mt. Nantai. 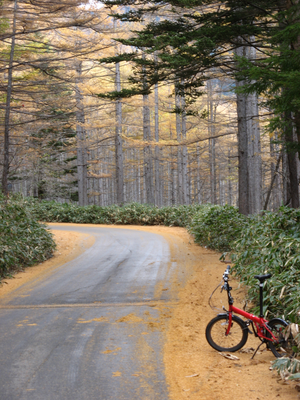 This new track, though, led to a series of switchbacks nearly as steep as irohazaka. I went up as fast as I could, though I was beginning to tire, but they were soon over. My effort was worth it: I found some really fantastic areas that I hope to explore further on foot some other time. There was a tiny valley that, from my vantage point up above, looked like a place made by magic (I didn't take a picture because I didn't want to ruin my memory of it), and a group of mountains still boasting a few trees with colored leaves, one of the mountains touched by an early-winter's frost (I did take a picture of this one). It was one of those places that but for the freezing weather you might want to stay forever, just taking it in. 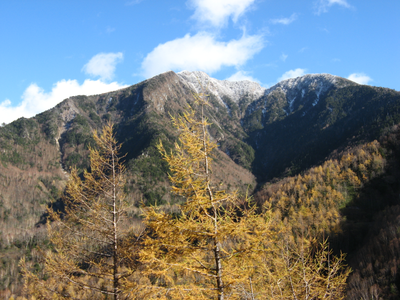 I rode from there down into the valley around a lake called Lake Kawamata. This was less impressive, and the road seemed to go on forever--even looking back I cannot understand why it took so long to go around the lake. Next I met my third irohazaka-level series of switchbacks, and by this time I was ready to call it quits. It was getting dark and it was near or below freezing; my legs were out of the juice that had powered them on the way up the real irohazaka. But I made it to the top, or what I thought was the top; after that, it hit a ranch area that I thought would be flat before a descent into Nikko city, but in fact it steadily rose, at steep grades nearly as difficult as any of the other hills on the trip, and longer. Frozen and discouraged, I went up these hills at 9 kilometers an hour, not a whole lot faster than walking, telling myself how happy I would be, and proud of myself, once I got home. And then I looked up and realized that in compensation for my hard work, I had a good view of the stars, which I hadn't seen since since my trip to Nagano last year.

I finally made it to the top and began a chilly and surprisingly long descent to Nikko city. I made it just in time for the train home.

I want to do this ride again as it gets colder, watching the snow creep down the sides of the mountains. It is much clearer in colder weather, and I may even camp later in the year so that I can see the sunrise over white-clad mountains.