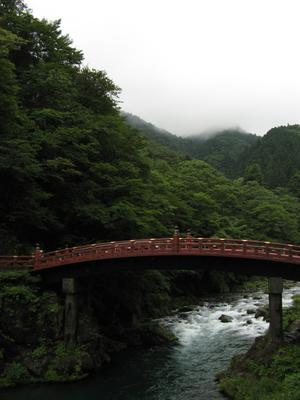 [Again a late post. I first went to Nikko last week for a day, then returned this week for three days. Part one I wrote while on the train back from my first trip, part two will come later, with photographs.]

Today was a satisfying day. I have had some trouble finding energy/time to get on my bike for long rides lately. Last week, I felt the weight of the last few weeks--trouble with a business class, interpersonal troubles, as well as a continuing, serious doubt about what I am doing here in Japan, have all taken their toll. While a couple of bike rides in that time have been enjoyable, one was frustrating because I got lost and didn't even come within 20 km of my destination, and the other was 12 hours long(!). They were good exercise and needed preparation for a planned trip over summer vacation, but were difficult to recover from. All this combined with a lack of sleep over the work week finally became too much, and I couldn't do anything last week but stay home. I had planned another bike ride that week, but woke up late and decided the 6 hour train ride for 4-5 hours of riding was just not worth it. Instead, I played video games and soaked up the feeling of not doing anything for an entire day. Though cycling is my favorite activity by far these days, another week without resting might have killed my enthusiasm for biking.

The rest helped. The panic I normally feel before class--something not alleviated despite a year of doing the same thing--was very much reduced this week, and though the business class was a complete fiasco for yet another week, it didn't bother me as deeply as it usually does.

Perhaps best of all, though, I was really ready for a ride this week. I rode my bike before work on Monday (btw--my days off are Tuesday and Wednesday, if I haven't said that before), and it felt like it had been a month. The feeling of being on the bike was fantastic. It hardened my resolve to go somewhere special this week: namely, Nikko.

I am planning to start my summer trip by heading towards Okutama and thus I have been focussed on that area. It is mountainous, and since I have little (no) experience riding in the mountains, I wanted to test myself. But it takes three hours each way, as I've said, to get there by train, and that's a bit much for a day trip. I decided to head to Nikko because I've never been there, though it is a World Heritage site and one of the most famous areas of Japan; it also has mountains. I was pleased, then, when I found it would only be a two hour train ride as I am on the train line that, ultimately, ends at Nikko. I managed to get up early and, despite threats of rain from the Internet weatherman, decided to pack up and go.

It was a pleasant enough train ride and surprisingly cheap. It did start to rain almost immediately after I arrived, but I unfolded my bike and headed out. I considered visiting the mausoleum of Tokugawa Ieyasu, the World Heritage site, but my main interest was in getting to the natural beauty of Nikko National Park and Lake Chuzenji; more than anything I wanted to try those hills. The 1300 yen fee was too steep for just a quick glance, so I passed on. The rain calmed a bit, though fog hung over the area the entire day.

The hills soon came. The roads in and out of the Lake Chuzenji area, my destination, make a pair called the "iroha hills". "Iroha" comes from a pre-modern method of arranging the Japanese syllables according to the order of a memorized Buddhist prayer instead of the modern ordering by pronunciation. It is as if English-speaking schoolchildren memorized "The quick brown fox jumped over the lazy dog" instead of the alphabet. There are 48 syllables in this older system, starting with "i", "ro", and "ha", and there are 48 curves, assigned rather a bit arbitrarily, on the paved roads. Thus the name.

As you go towards Lake Chuzenji from Nikko city (west, in other words), you gain altitude. The curves, and the syllabary, begin from there. Thus, curve #1 on the ascending hill is "i", #2 "ro", and #3 "ha", climbing to the 20th, "ne". The return, descending trip, goes through the other 28, ending with "su". I noticed there were a couple more hills than marked on this descent, and according to the Japanese article at Wikipedia, there were indeed originally 50 total curves, but the "official" number was reduced to neatly fit this system.

I personally don't know the order of the system, but luckily there are signs at each curve giving the number and the syllable associated with that number. Or unluckily--I hate running counts of my progress when I am exercising, and the excruciating slowness of the numbering of the curves as I struggled up the steep hills was particularly annoying. However, I was happy when I saw 17, "re", knowing the ascent would soon be over (though without any idea of how soon). By this point I was stopping every couple of minutes to take a breather or get out of the way of ascending car traffic. I don't recommend the rode to Chuzenji for this reason--the roads are narrow and closely walled on both sides, and huge tour buses spewing an unfamiliar amount of black air climb past one after another. Unfortunately, there is no other bikeable route available that I am aware of.

My bike help up quite well, but I sorely needed some lower gears. The grades were manageably steep and I think with a greater number of gears I would have needed less breaks. As it was, though, it took me nearly four hours to go 16 km and gain about 500 m.

The struggle was worth it. Chuzenji, in fact, was not as great as one might be led to think, but I hope to go back next week for a few days' trip, when I will camp and hike through the surrounding mountains. What was worth it was the feeling of accomplishment--though, honestly, 500 meters over 16 km is not such a great feat in the world history of bicycling, for me it is a new record. I felt extremely satisfied that I had come so far all on my own power, and even told the cars that passed me how proud I was as we descended into the Chuzenji area together.

I began to worry at this point that I might have trouble getting back. After four hours I knew there was no chance I'd be able to go hiking as I'd hoped, but I wanted at the very least to find the campsite I'd planned to look into for my camping trip the next week; however, it was approaching 4 pm, and I was worried I wouldn't be able to find the campsite and still be able to get back down the mountain before dark. I didn't want to race down the curvy return road with cars bearing down on me in the dark, and besides, I was shy of late returns after my experience in Mitake nearly a year ago. But I thought it a shame to come so far through so much effort and still not know if I would be able to camp there (which was, of course, the reason underlying my decision to continue on Mitake...). I proceeded on.

The campground was only about 15 minutes on, in Shobu ga Hama, a beach area on the northwest part of the lake. The attendant said there should be no problem the next week and I rode away eager to come back for a longer stay.

I started my decent almost immediately. I remembered reading somewhere to be careful of squeezing on the brakes as they would heat the rims to a point where it might burst the tube and cause a blowout. No doubt about it--after a minute of clenching the brake levers, the front rim was hot to the touch and might have heated the inner tubes to a dangerous temperature had I held on much longer. I ducked out of the way of passing tourist-carrying pollution-mobiles and let the rims cool, then continued. I did this several times, but still managed to get down to the last syllable in less than 30 minutes. I coasted almost the whole way to Nikko city, getting to the station just twenty minutes before the train I'd hoped to catch.

It truly was a great trip. I proved to myself I am capable of something (even if it takes four hours!). I also experienced the majesty of the mountains, something I have not tasted in nearly a year. Standing at a point half-way down the mountain, breathing and looking up at the green heads of the mountains, I remembered a half-forgotten and never fully understood feeling that there is a purpose to living, something so far from the inane life we city-dwellers lead without thinking. Something hidden not in huge mansions, safety-deposit boxes, or in the breast of another human being, but here, somehow here, high in the mountains.