I've given up, and am now planning to leave next Sunday. Not a big surprise, but I just wanted to put it down on (virtual) paper.

In any case, I'll be back, both because I want to and because I went to Mt. Fuji on Saturday. 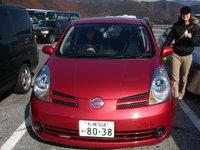 It took about 2 hours, I think, to get there by car, and it was EXPENSIVE! There are stretches of road where the toll is $20, each way. and yet Takashi paid it without flinching. He paid for everything, as a matter of fact. He must be doing well. Thanks, Takashi, again!

Fuji really is amazing, and though the staggering sense of immensity and vague threat can't really be conveyed in dinky photographs, I did my best. I've seen photographs of Fuji so many times, and yet I was still moved when we came around the corner and first saw it. I can't imagine what it must have been like for those who had never seen it in photographs. No wonder they thought of it as a god.

We went up to the 5th station, where the road ends. Beyond there you have to climb, and it was far too cold to climb without special gear.

We then went down to a park we'd seen on the way - it had a very nice view of the peak, 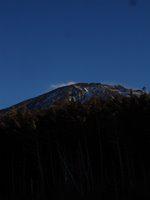 and a shrine to Tengu rock. I don't know what the story is about this rock, but I'll find out. In any case, that mask is the mask of a tengu, the creature I dressed up as for Halloween. 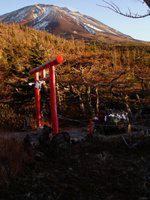 I wanted to take some more pictures of the full peak before the sun went down because the haze had subsided by then, but we didn't make it. I took some night shots on long exposure. 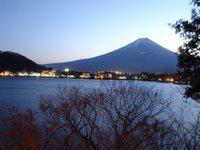 When we got back to Tokyo, we went first to a yakitori izakaya. An izakaya, if I haven't explained before, is a wonderful invention - while you drink (heavily) you eat; similar to tapas, but more substantial and very Japanese. It's hard to meet people, as you usually just sit with friends, but these days I prefer that to American-style bars where everyone stands around. 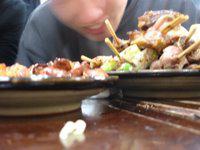 Next, unable to call it quits early on such a great day, we went for karaoke. 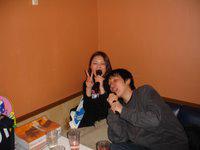 Unlike every other time I've been karaoke, I actually was able to sing. I discovered a secret - I can't sing songs I "know" very well, but I'm fairly good at songs I've never heard before. I guess when I sing songs I know I'm not listening for the rhythm but trying to remember the words - when I don't know the song, I follow along without thinking. Pretty cool. We had an absurdly good time!

I ended up missing my last train, so I had to take a different train and walk for quite a ways, but it was worth it.It was maybe the best day I've had yet in Japan, and I've had some good days.