East to Weston: Being an Account of a Journey by Bicycle to a Small Town on the Missouri River, the Main Point of Which Journey Being to Drink Beer in Said Small Town 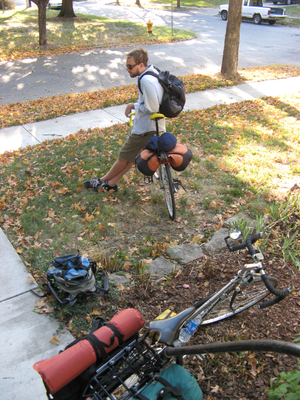 My friend from work, Ian, and I have been thinking for a while about going for a ride up to Weston, Missouri. We both love biking and are trying to get into a respectable shape, and I persistently touted the beer, so there was really no question of where. We finally decided when last week, and scrambled to get both our bikes in proper shape for a long journey.

I've been to Weston twice: once on the return loop of my Missouri "tour" last year, and again ??when?? It's quaint, the state park next door is a great place to stay, and there is a bike path linking the two. Not many places in the vicinity of a day's ride can boast such a list of pros.

We set out about 9 Saturday: I spent most of the morning making maps I didn't really expect to use. I had a few errands, then we headed out.

We stopped in Tonganoxie for breakfast: there's a place there that serves standard American breakfast fare, and I was looking for some calories to push me up to Leavenworth. Ian stuck with protein, but he'll learn! 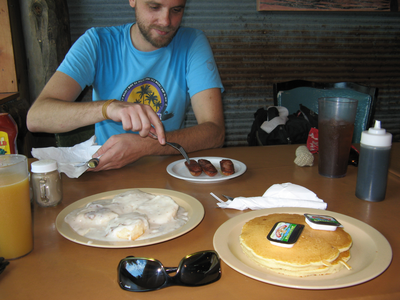 Out of Tongie, there was a detour from the main route; Ian wanted to give the main route a try: maybe it was something we could pass easily, they just wanted to keep cars out. I told him I had tried something similar before, but had, in the end, had to double back, and had lost precious time and wasted more precious energy because of it. I'm not sure I convinced him, and I wasn't totally convinced myself (it might have been an adventure!), but we ended up taking the detour.

The wind was at our backs, and how! We sped along, often going 20 mph easy on flat land. We were feeling pretty good at this point; we traded excited tributes to the glories of traveling by bicycle: the open air, the comfortable pace, the feeling of connection with the land around us. This made me feel better for choosing the detour: we had no problem making short work of the extra distance it entailed. 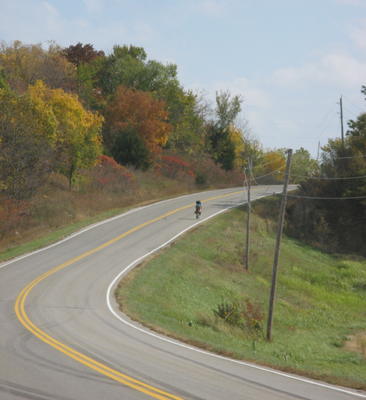 Ian powers up a hill

At last, though, I was a bit thrown off track, and while I had a general idea of the route (enough for me: we just had to go north and east, right?) I think Ian was dubious. Still, he followed me, even through a stupid gravel road that was marked as passable on the map.

But all roads pretty much led to Leavenworth, and after about a half an hour we were there. We cruised through, in no hurry because we were much earlier than we needed to be. We decided to try to find the local bike shop, a place I'd heard a lot about.

While the bike shop was pretty standard fare, on the way out we were accosted by a friendly couple who were themselves planning a world tour in four years--good for them! They were fun to talk to, and it's always great to share your enthusiasm for biking and travel with others.

Suddenly—blam!—there was this gunshot sound, then a beautiful hissss. We stood around craning our heads like prairie dogs, trying to keep our conversation going but every one of us curious what the hell that sounds was. I have to admit in the end not a single one of us found the truth, but we decided to agree it was a sudden puncture in the tire of a truck parked a little down the road. Ian reported later he thought this was all very ominous.

I'd hoped to check out the Leavenworth river promenade; there's supposed to be camping there and I was a little worried about the prospects at the campsite in Weston Bend. However, the area was closed due to flooding (how many days since it had rained??), so we looked in the windows at the nearby carousel museum, then continued toward a park overlooking the Missouri river from above.We paused for a smoke (Ian) and a view of the river (me), then set off across the bridge. On the way, an old man looking very much the Fool on the Hill yelled something incomprehensible but vaguely threatening from where he was sitting in someone's lawn. I wanted to ask what he said, because I'm sure it was just fascinating, but was really just too intimidated by his mental state, and just rode faster to catch up to Ian.

We managed to cross the tiny bridge to the Missouri side without getting killed, then had a lesson in animal anatomy. Every animal available in Kansas or Missouri was splayed out on the side of the highway, an organ here and a bone there; some were fresh, some weeks old. Frogs were the most prevalent, but I saw raccoons, opossums, deer, snakes, and Ian saw a turtle. Even a stuffed animal, probably thrown by some cruel young boy from the window of an SUV in a hurry to get to the Weston Bend cider festival, was lying purple and unloved in the shoulder.

We finally found the trail that leads first to Weston Bend State Park, then to the town of Weston itself. It's maybe two miles from the bridge at Leavenworth, and after the uneven shoulder and animal graveyard it is a welcome sight for the touring cyclist.

Ian had been fighting his chain for a while, and the steep hills on this trail into Weston made things much worse. I'm not sure how many times Ian got his chain caught, but he was getting pretty hot by the time we reached the entrance to the park

As soon as we got there I remembered the climb to the campsite, and I knew what Ian would think of that: his knees were hurting and I think he was tired of me being guide. But we had to push on, and push on we did.

The hill up to the main part of the park is pretty dreadful, and I remember Ian saying something along the lines of "we have to come back up this hill after we go drinking?" Because that is exactly what we had to do: once we found a campsite we could take a lively ride down the hill to the trail, then pick it up for an easy ride into the city of Weston; but the ride home would be another slog up what would seem like a mountain after a meal and several beers.

And that same mountain finally tested my resolve as well. Like I said, Ian had been having problems with his chain; all of the sudden my chain got caught in between my spokes and the sprocket, and I wasn't going anywhere. Ian continued on, but I couldn't even walk my bike up at this point because the rear wheel wouldn't turn.

After a day of trying to stay calm and collected, the fifty miles was finally taking a bit of a toll on my out of shape body, and through that flabby body my flabby mind. I pushed and shoved my chain, then I yelled at it, then I screamed; at this point I figured I had done everything I could, so I pushed and shoved some more. Then after a bit more screaming I realized it might help to calm down and approach the problem more strategically. Basically this worked: instead of yanking on the chain I eased it a bit and somehow that worked. I pushed my bike up the hill to find Ian chilling out next to a sign.

We rode on from there, through a group of kids screaming like they were on a roller coaster but really just enjoying the outdoors after warm cider; past an old tobacco barn; and through some wooden gates that close at night to keep out vehicle traffic after dark.

At least we arrived at the campsite... oh, wait, did we just pass it? We were zooming down, then crawling back up another monster hill when I realized we had passed the campsite and were headed outside the park. When we got to the top of the hill, I swallowed and said in my best whiny voice, "Uh, sorry, it's back there."

This was pretty much it for Ian, I think. He yelled "What?" in his best tired, whiny voice. I yelled back "I made a mistake!", then, with another "sorry",  I turned around and headed back towards the hill and the campsite, letting Ian stew by himself for a bit.

But the best news was yet to come. I knew Ian was worn out and near the end of any patience with me, so I was eager to try to find us a place to set up camp and rest before things came to blows. I went ahead into the park, but saw quickly that things were not good: even though it was getting later in the year, the weather was still pretty fine and people were still camping; in fact, every site in the place was full.

I rode back to find Ian, and reported the news, pointing out that there was some rule in the Missouri park system that required them to find space for bicyclists—but not totally confident about this. Ian was resigned to fate at this point, and just shrugged.

The camp host was out, so we sat and ate some food while we waited for them to return. It was still a fine day at this point, and things could have been worse, but I was tired and a bit worried we might have to head back that day.

But when the host finally showed up in his golf cart, he reassured us he would find space for us—for free (wow, really?!)  Oh, no, wait, it's the same price (damn!), but at least there's space (yeah, can't complain...).

We set up our tents and laid down like dead men for a while, dreaming of dead reptiles.