12/9: Sunflowers and snow—Magdalena to Datil

I ran into town early for breakfast. I ate a huge meal and talked to Danielle, the owner of the cafe. She told me that quite a few people come by Magdalena running, biking, walking. I guess a group is walking for awareness of homelessness just ahead of me; I'm surprised I didn't see them today. But maybe they ducked out because of the inclement weather... 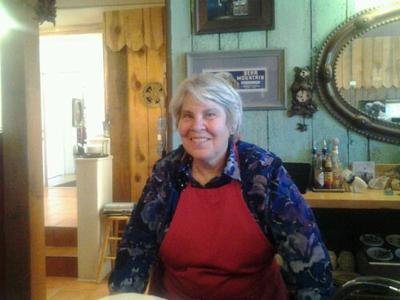 I looked at the weather report while at the cafe, first time in weeks. Yow! 9 degrees tonight. I decided to pass on camping, and Danielle called the only motel in Datil, my next stop, for me. I got a number from them that I could call if they were closed when I got there.

My big objective for the day was astronomical: the National Radio Astronomy Organization's Very Large Array. It's the biggest "telescope" we have, with a huge array of dishes that all operate as one huge dish. I thought of it as compensation for missing Mesa Verde in my old northern route plans (which I'm so glad I abandoned, now that many northern cities are snowed in!).

But the wind was back. And I was back to crawling. I listened to music and put my head down. Hills went up mainly.

After a while the dishes of the array appeared on a huge level plain from behind the hills. I worked my way towards them, it seemed to take forever. I worried about cold and a forecast possibility of precipitation, but I wasn't going to pass this up. 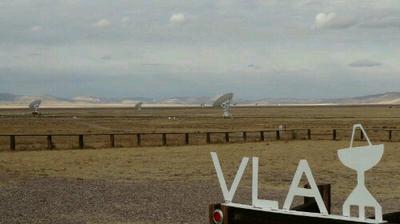 The dishes made me think of sunflowers, except these weren't turning to collect the rays of our sun, but rays of other suns and supernovae. The visitors' center was pretty interesting and I wish I'd had more time: I just watched the simple video that explains how the array works, but there were more in depth videos and displays explaining the data from the array I passed up. I can get that later from the Internet anyway. 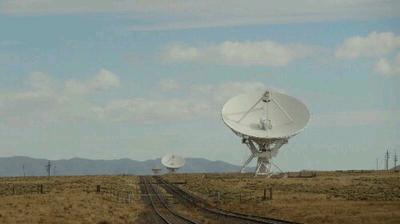 The real show was in the dishes. Each telescope was massive, of course, but seeing them all spread across the huge plain created another impression altogether. An image that combined the radio data of the VLA and the observable light data of the Hubble space telescope extended this impression: here was something that is so much bigger than us, and we are exploring it, all while we spend so much of our time chasing so many smaller things. I wanted to spend a day or two with an astronomer using the scope. But I guess their data is mostly the smaller stuff, too. Small hands putting together these large pieces of the puzzle that build a picture of the big stuff over time. 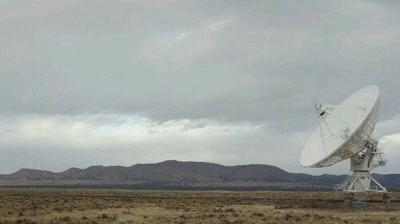 After that the clouds began to roll in. Most of the dishes are too far from a road to be seen up close, but one is located right off the main highway 60 from Magdalena to Datil. Just as I was passing by this, clouds appeared from behind the hills, trailing white over the plain. 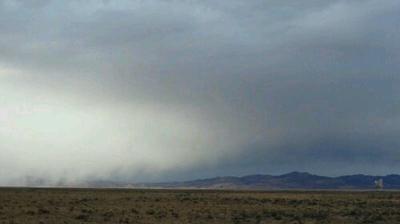 The sun went down and I kept moving. A bit of snow mixed in the heavy winds and hit me now and again. In the end it was nothing terrible, but I was disappointed that not a single person even stopped to ask if I had a place to stay. In the end, a guy from the motel drove up to me in the dark and told me he had a room ready when I got to Datil. He had worried about my late arrival and came looking for me. Thank you!